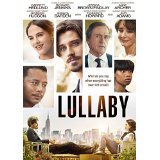 The impending death of a loved one tends to dredge up a complex mix of emotions. (Unfortunately, I speak from relatively recent personal experience.) In addition to the obvious sadness, there can be guilt, resentment, anger, relief, and other sentiments that combine to create a messy stew of feelings. Putting those feelings on the page or on a screen is an emotional minefield, since you risk veering jarringly from one tone to the next. The task becomes even trickier when you attempt to introduce humor into the equation. Lullaby stumbles over a few of those mines, but is otherwise a well-acted, modestly-affecting dramedy.

The movie opens with a close up of Lowenstein family black sheep Jonathan (Garrett Hedlund) taking a long, luxurious drag off a cigarette. Soon enough, we learn the gesture functions as a middle finger on a couple of different levels. On one hand, Jonathan is smoking on an airplane lavatory, which almost gets him arrested by a strict flight attendant. On top of that, it turns out Jonathan is on his way to visit his well-to-do New York City family because his father Robert (Richard Jenkins) is dying of lung cancer.

Once Jonathan arrives at the hospital, Robert drops a bombshell: he intends to take himself off life support within the next few days. The decision rocks Jonathan, along with his lawyer sister Karen (Jessica Brown Findlay) and their long-suffering mother Rachel (Anne Archer). Karen files an injunction to prevent Robert’s doctor (Terrence Howard) from assisting in her father’s death. Meanwhile, Jonathan begins to spiral out of control. Two unexpected encounters help him keep it together: Jonathan connects with a no-nonsense 17-year-old hospital patient with terminal bone cancer named Meredith (Jessica Barden), and re-connects with former flame Emily (Amy Adams), aka The One Who Got Away (For Unspecified Reasons).

By this point, you may have noticed that this movie has a surprisingly loaded cast, including four Oscar nominees (Jenkins, Archer, Howard, Adams) along with Oscar winner Jennifer Hudson in a thankless, charmless role as a nurse that is also the one billionth variation on Sassy Black Woman. The collection of talent is especially impressive when you consider this is Andrew Levitas’ feature film debut as a writer/director. (Levitas has previously made a name for himself in the New York and Los Angeles art scenes.)

Lullaby is the sort of dramedy with enough emotional, human moments that you can understand the appeal for a star who wants to play a “real person” for a change. (I liked the detail of adult siblings being mildly scandalized after hearing their delicate mother drop an F-bomb.) However, the simple structure of the story — which places a countdown on Robert’s life and Karen’s time to change his mind — isn’t quite strong enough to support either all the subplots or all the star power. Adams, in particular, is lovely as always, but *way* too famous for her tiny role to the point that it’s distracting. I couldn’t help but keep wondering how and why she was even here. (Did she film this on her Man of Steel lunch breaks? Did she owe somebody a favor or lose a poker hand?)

In terms of the subplots, a harsher hand during the writing or editing process might’ve helped focus the movie a bit more. For example, we didn’t need to see Jonathan bond with both Meredith and Emily to understand that his personal barriers were being torn down. (I’d personally keep the Meredith subplot, despite the fact that her introductory scene is a poor man’s version of the great James Badge Dale scene from Flight or that introducing sick kids into the equation feels a step short of manipulative.) The idea of Karen presenting a case for why Robert should live felt similarly hokey, but at least it gave Brown Findlay a strong monologue and it served more of a purpose than Robert inexplicably announcing that he was cutting his kids off financially.

Levitas finds more success with the way he incorporates the Lowensteins’ Jewish heritage into the story and into the family’s process of saying goodbye to Robert. Jenkins, croaking out almost every line while managing to hint at his character’s former liveliness, is very good as Robert. His performance, along with that of Hedlund, Brown Findlay and Archer, make the film’s flashbacks to healthier, happier times feel superfluous. Hedlund, in particular, takes what could’ve been a fiercely unlikable character and roots him in very real pain. When Robert was first diagnosed with cancer, he was given six months to live; we meet him 12 years into his battle with lung cancer. The film alludes to Robert (a well-to-do financial wizard) not approving of Jonathan’s choices (he’s a struggling musician). But the more moving arc comes from the realization that Jonathan wound up detaching himself from every personal relationship in his life because he didn’t want to get too attached to a “dead man.”

It’s no spoiler to say someone does get sung to sleep by the end of Lullaby. The movie hits some false notes along the way, but it’s a worthwhile drama about the importance of saying goodbye properly.