Posted in: Disc Reviews by Gino Sassani on August 11th, 2014 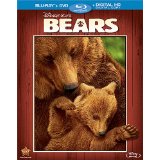 There was a time, decades ago when Walt Disney Studios was doing quality documentaries on a pretty regular schedule. Many of them appeared on the television show The Wonderful World Of Disney, and more than a few were released as feature films. And while that tradition has continued somewhat, it’s been a while since I was truly impressed by a Disney documentary. That all changes with the release of Bears.

The film is short. It runs about 77 minutes. That makes it far more child-friendly than many of these feature nature films. It follows the lives of a mother Alaskan brown bear and her two cubs for an entire year. We begin deep inside the winter den where Mother, named Sky, and her two cubs Scout and Amber are sleeping away the last moments of winter hibernation. The three have spent months cuddled together, babies feeding from Sky’s dwindling supply of nutrients. Now it’s spring, and the family must journey to the water where salmon are also headed. Sky will need to feed on plenty of fish to replenish her milk supply and store enough away for the next hibernation.

We follow the bear family over the mountains where they run into a few dangers. There are wolves to contend with. When they reach the water there are larger, hungrier bears that might just see Scout or Amber as a chance to fill their own empty stomachs. But the greatest danger of all is not finding the fish in large enough quantities.

The film is narrated by John C. Reilly. He supplies an authorative enough voice. I was a little disappointed that the script did resort to some imagined dialog from the animals, but it never rose to the level of reducing the documentary to cartoonish entertainment. After all, this isn’t Winnie The Pooh. These are real animals in a real environment. The enemies are elements of nature itself. This is the circle of life like The Lion King isn’t really able to tell. There are frightening moments, and a couple of children in my first screening expressed concern for the family of bears once or twice. None of them were frightened to the point of tears or hysterics. I know some of you parents out there have to be mindful of such things. The mood is certainly serious enough, but it doesn’t get so heavy-handed as to bother the youngsters.

Bears is presented in its original aspect ratio of 1.78:1. The 1080p image is arrived at with an AVC MPEG-4 codec at an average 35-40 mbps. The real thrill of this film is the awesome cinematography. First you have such wide and beautiful vistas that are somewhat alien to us here in Florida. There is a majesty to these Alaskan mountains and waterways that is absolutely captured here. This is the first feature documentary I’ve seen to fully capture the marvels of modern digital photography. The ability to zoom in close to the suckling bears without losing the slightest detail is nothing short of amazing. You can’t help asking yourself just how they got so close. The use of high-speed frame rate is also used brilliantly. As the bears chase the fish in the streams the ultra-slow motion captures droplets and splashes of water in such time-frozen detail that you might be surprised you walked out of the theater completely dry. There simply isn’t another film out there to compare on standard or even IMAX screens. This is absolutely an amazing high-definition image presentation. Detail allows you to see a single blade of grass in a cub’s mouth or a small fresh wound above Magnus’s left eye.

The DTS-HD Master Audio 5.1 is really there to serve the narrative. It’s clear throughout. The score is always subtle. The music isn’t intended to be dynamic, but it does offer a nice sharp presence. The surrounds are limited but do include typical natural elements like water moving in a stream or the wind rustling a few trees. The footsteps crunch rather nicely in the snow. Still, your sub only comes alive a few times, most notably an early avalanche. Even then it’s not anything that’s going to shake your room.

Welcome To Alaska: (6:07) A closer look at Katmai Park where the footage was shot in Alaska. Here bears mostly ignore and accept people, so the crew was able to live close to the animals they were shooting.

The Future For Bears: (6:37) Credit this one for going nowhere near the whole global warming debate. Here they talk about educating the public away from the violent reputation of these animals so that people will respect them more.

A Guide To Living With Bears: (7:05) Here we look at how the crew lived with the bears safely. They had to learn a few things and follow a few simple rules. We see some footage of the guide’s encounter with a few of the bears.

How Did They Film That?:(7:23) I was hoping they’d tell us how they got that outstanding footage of mom and newborns in the den. Unfortunately, they don’t. This is pretty much the behind-the-scenes footage as they describe the various strategies to film these animals in their various environments and situations.

I did not see Chimpanzees, so I’m unable to compare the films. This one will be a pretty awesome experience for the whole family. Unfortunately, that’s rare today. In the first week Disney donated some of the ticket proceeds to protect National Parks, so grab the kids and spend a little over an hour and “make this place your home”.

Gino Sassani is a member of the Southeastern Film Critic's Association (SEFCA). He is a film and television critic based in Tampa, Florida. He's also the Senior Editor here at Upcomingdiscs. Gino started reviewing films in the early 1990's as a segment of his local television show Focus. He's an award-winning recording artist for Omega Records. Gino is currently working on his 8th album Merchants & Mercenaries. Gino took over Upcomingdiscs Dec 1, 2008. He works out of a home theater he calls The Reel World. Favorite films: The Godfather, The Godfather Part II, The Body Snatcher (Val Lewton film with Karloff and Lugosi, not the pod people film), Unforgiven, Gladiator, The Lion King, Jaws, Son Of Frankenstein, The Good, The Bad And The Ugly, and Monsters, Inc.
Need for Speed (Blu-ray) Locke (Blu-ray)