Posted in: Disc Reviews by Archive Authors on August 11th, 2014 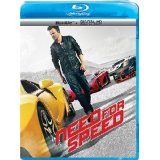 Need for Speed is based on a video game. It caters to people who love the experience of speed. There is a huge audience for this sort of thing. To their credit, the writer and director makes every effort to create an actual story and real characters in this presentation. It is easy to compare it to Fast and Furious, but why bother. That gives these sorts of films too much credit. Fast and Furious and Need for Speed are designed to give people a thrill. If anything, Need for Speed takes things more seriously than the Fast and Furious series. It also focuses more on beautiful and very expensive cars. Some of the cars featured include Koenigseggs, Lamborghinis, Ferraris, Porsches, McLarens, and Jaguars, but Ford Mustangs and Torinos get some of the most lavish praise. It could be a commercial for these cars. In fact, the film could be a commercial for the video game and the car culture, in general. One of the plot points is that the millions of invested in these cars is motivation to overlook past hostilities. The other reason for making this film is to give a star vehicle to Aaron Paul (Breaking Bad).

Tobey Mitchell (Aaron Paul) has a high-performance car shop in Mount Kisco. There are some fun street racing scenes right at the start. It should be stated that, at every point in this film, there is zero concern for the safety of innocent bystanders. The driving is always reckless and insane. He connects with his old girlfriend Anita (Dakota Johnson) who was stolen away by an old friend. That ex-friend Dino Brewster (Dominic Cooper) is now a big shot in the racing world. Tobey is behind on the mortgage on the shop. Dino offers him $500,000 to fix up a $3,000,000 car. Tobey has no choice but to set their differences aside. All his coworkers and best buddies are totally against it including Anita’s brother Pete (Harrison Gilbertson). Pete is also a bit of a psychic and seer, predicting that Tobey will win a great race that ends at a lighthouse.  I’m not going to go on about the plot too much, because it’s predictable and done just to make sure no one just thinks it’s a cheap video game rip-off. Aaron Paul does give full commitment to his role and is actually very good. I don’t think he’s leading man material, but he is able to convey all levels of intensity. This movie would be better off with a Steve McQueen type, but those are nearly nonexistent (although I think Tom Hardy has potential, but he’s not in this movie).

Michael Keaton phones in a performance (literally, since he is only seen from the perspective of his Skype setup as the ringleader and organizer of a high profile illegal road race). Keaton plays a kind of shock jock crazy, and Keaton has always been good at crazy. Imogen Potts plays a rich car dealer who takes a liking to Tobey. All I’ll say about the plot is that it turns into a revenge piece where Tobey has to get to clear his name and undo the damage that nasty ex-friend Dino has perpetrated. The outrageousness of the scenes and stunts are entertaining but ridiculous, but that’s kind of the point. The people who go to Need for Speed want to see fast cars going really fast and crashing as much as possible. They want to see goofy, crazy stunts. They’re not going for the acting, but don’t tell Aaron Paul that, since he tries so hard. No one else does. I think everyone realizes this is just a paycheck, but that makes sense since the movie falls on Paul’s shoulders. This is his first big-budget big screen starring role. Paul’s got a big-budget Ridley Scott epic called Exodus and a Russell Crowe film called Fathers and Daughters coming up. He obviously has made a big impression with Breaking Bad and will be able to coast on that for a while. Fast and Furious started out big and faded away and then came back strong after being nearly forgotten.

Need For Speed is presented in its original aspect ratio of 2.39:1. The 1080p image is arrived at with an AVC MPEG-4 codec at an average 35+ mbps. This high-definition image presentation is quite glossy and shiny. The car colors break out of the screen with vibrant colors that offer impressive reflectability that is razor-sharp. Even though some of the film has a documentary feel to it, none of that is apparent in the image. It’s all quite crisp and clean at all times. Black levels are fair. This image is completely focused on showing off these cars.

The DTS-HD Master Audio 7.1 is like being at the races. The engines deliver wonderful sub moments as they roar to life. The surround mix gets quite aggressive as these fast machines roar up behind you and swoop around you. I imagine this is the closest most of us will get to that experience. Dialog still manages to pierce through the rumble. The score gets a little heavy and aggressive at times, but it’s all intended to give you an extra shot of adrenaline.

Look for the Easter Egg in the menu that takes you on a quick spin in the camera car.

Capturing Speed – Making An Authentic Car Movie: (9:44) Cast and crew take us behind the scenes and behind the wheel for a ton of action. The car stunts were all done for real, and there is limited computer work done here. That’s a refreshing decision that does add authenticity and mass to the film.

Ties That Bind: (12:03) Stunt driving is a family business for the Gilberts. This feature looks at the three generations of Gilberts on hand to do the driving stunts.

The Circus Is In Town: (10:50) The director narrates a series of photos and some footage to demonstrate the relationships and scope of the production crew’s bonding.

Monarch And Maverick: (1:42) Outtakes with intro by director.

Deleted Scenes: (5:08) Four with play-all option and introductions by director.

The Sounds Of Need For Speed: (9:25) A closer look at the sound design. It was all recorded on natural 7.1 and not converted. It’s a difference with real distinction. You really get the idea you now know what it at least sounds like to go really fast.

This film is empty calories full of gas. Car aficionados will love it, though. Parents not so much, since it encourages reckless behavior. Aside from the death of Paul Walker, I wonder how many deaths can be attributed to these kinds of films. Remember kids, these are professionals, so don’t do this at home.