Posted in: Disc Reviews by Archive Authors on August 12th, 2014 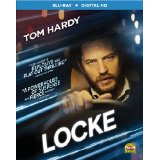 Experimental film can mean lots of different things. Usually it means chaos and disorientation as we are plunged into worlds we have never seen before, but experimental can merely mean doing something that has never really been done before. In this case, it is taking a simple idea and seeing if you can make it work. Can you make something interesting that seems too simple and too basic? Anything can work if you apply discipline and intelligence to a project. In this particular case, that is what happened. A simple premise has been executed brilliantly due to a number of factors. The first factor would be the actor Thomas Hardy.

Tom Hardy is Locke in the hyperbole of old movies but also because Tom Hardy is the single driving force of the movie Locke. It also helps that Tom Hardy is destined for superstardom. It hasn’t happened yet, but those in the know, know it will. People don’t know Hardy from The Dark Knight Rises, and I say don’t know because you only saw his face briefly, and his voice was a maddening concoction. Hardy was Bane in that movie, and his face was covered by a mechanical breathing device which obscured an effete, elitist and taunting voice. His incredible power as an actor is demonstrated time and time and time again when he steals scene after scene in Inception, This Means War, Lawless, Warrior and Tinker Tailor Soldier Spy. Upcoming roles for Hardy are as Elton John in Rocketman, Mad Max in Mad Max: Fury Road and the lead role in Kathryn Bigelow’s True American. He has the burning intensity of a British Brando and the quiet sensitivity and range to do just about anything including bulking up with muscles if necessary. I’m sure he could un-bulk or get fat if needed as well. He’s done it before. Tom Hardy’s performance in Locke is a tour-de-force.

Locke is about one man’s crisis presented in the most intimate and focused way. It is a film about suspense, but it defies expectations on what is suspense. I don’t think it’s important you know the details of the crisis that Locke faces before going into this movie. It is compelling. He is an everyman fighting incredible odds, but he is not racing to defuse a bomb to save mankind from destruction. His crisis is more like what anyone of us would face on the worst day of our lives. Locke is a man of decency and intelligence who must unravel problem after problem all from behind the wheel of a car driving through night traffic. His only contact with all the various people in his life for 90 minutes is his cell phone. We can become completely immersed in this man’s problems, which shine a light on our own internal struggles and solitary attempts to defeat the adversaries in our own lives. We can identify with this man because he is trying so hard to be in control as he makes every effort to atone for one mistake in his life and to face the failures of those who came before him.

Tom Holland, Ben Daniels and Ruth Wilson are some of the actors voicing characters in Locke’s life. Locke is constantly jumping from call to call, trying a little bit desperately but with utter determination to juggle various personalities that are all freaking out in some way because of a decision Locke has made. There is a line Locke repeats more than once. “I have made my decision.” It might be a decision that ends Locke’s life as he knows it, but it is his decision. He has choices, and his intelligence has searched through all those choices.

Locke is presented in its original aspect ratio of 2.40:1. The 1080p image is arrived at with an AVC MPEG-4 codec at an average of nearly 40 mbps. You have to be careful when evaluating this high-definition image presentation. The entire film is set in the front seat of a car. There isn’t a lot of movement to capture, and there’s quite a bit of style going on here. You see Locke often through a windshield or side window. That means his image is hazy, often surrounded by odd reflections and plenty of camera flares. This is all the intended appearance of the film and can’t be thought of as flaws. Colors are rather warm. Hardy’s flesh tones appear a bit yellow, partly due to color temperature and partly due to the reflections. You have to trust me here when I say the image is faithful to the intent of the filmmakers.

The DTS-HD Master Audio 5.1 is intentionally cramped and close. Don’t expect much from surrounds or sub here. You should be focused on these conversations. The score is absolutely subtle and nearly invisible throughout. The emotion of the film lives entirely in Tom Hardy’s voice, and that’s what the audio presentation delivers here. Anything else would be merely a distraction.

There’s a Commentary Track with Writer/Director Steven Knight. It’s a bit of a love fest for Tom Hardy, but reveals some interesting perspectives on what’s going on inside the character’s head.

Ordinary Unraveling – The Making Of Locke: (9:37) This is an interesting feature because of the unique way the film was made. Essentially the entire film was filmed each night over six nights. The best stuff was then edited into the final film. You get to see the voice cast working behind the phone calls. They also worked the entire shoot. The interaction was live and real for the conversations. You get the typical cast and crew remarks, but nothing about this film or feature can be described as typical.

Locke is written and directed by Steven Knight tautly, economically and compellingly. There will be those who see a movie like this and complain. They will say it is claustrophobic and minimalistic. Those words don’t have to be bad things. This movie is all about focus. We are seeing a man’s entire life play out inside his head in 80 nail-biting minutes. Each and every one of us should be able to identify with this man’s isolated and lonely struggle.