“31 Nights of Terror” The Dead and the Damned II 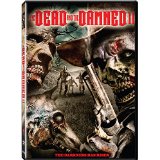 So you want to make a zombie flick, but you realize everyone and their (undead) brother seems to have beat you to the punch. The question becomes, “how am I going to make my monster movie standout?” Even if you mess around with time, place, and genre, it’s hard to stake out new territory. The micro-budgeted/straight-to-DVD Dead and the Damned — also released as Cowboys & Zombies in 2011 — tried to play with all three. This new sequel takes a more typical approach to zombie horror; in fact, the biggest departures are a curiously-armored hero, a disabled heroine, and an amusing undercurrent of horniness.

The Dead and the Damned II — you can tell this is a serious sequel because they went with a roman numeral — opens with Lt. Col. Sawyer (Robert Tweten) solemnly incinerating the pile of goo that used to be his family and putting the ashes in a thermos. (Sadly, there wasn’t a Folgers tin can readily available.) Sawyer proceeds to dispatch a bunch of zombies and embarks on a mission to scatter his wife and daughter’s ashes in the Pacific.

To get there, Col. Sawyer has to go through a quarantined zone. That’s where he encounters Stephanie (Iren Levy), a comely, deaf survivor who wears a sign around her neck asking people to speak clearly and look at her when they talk. The duo eventually team up with a preachy former insurance agent named Wilson (John J. Welsh), who tries to convince Col. Sawyer that he has a purpose beyond completing his trip to the Pacific and re-joining his family.

Let’s be clear about one thing: The Dead and the Damned II is exceedingly dumb and messy. The messiness I can largely overlook given the obvious budgetary restraints. (Most of the time, it’s hilariously apparent the “zombies” are wearing rubber masks.) The dumbness is another story. Fortunately, Rene Perez — the movie’s writer/director/editor/cinematographer/co-composer/(probably)caterer — seems to be at least vaguely aware of how dumb and cheesy his movie is.

For example, there’s an early scene where a mother (Raven Lexy) — who has been bitten by a zombie — pleads with her daughter to run away and save herself. It’s your typical low-budget scene with questionable acting and bad, repetitive dialogue until the zombie attacks the mother…and her blouse flies open right before he starts snacking on her. It’s a shameless bit of nudity, but it also took me back to the more gratuitous moments from 1980s horror movies. Perez hits that tone again when he has Stephanie change out of her clothes and into a flimsy dress for no good reason. (Not to mention the clumsy rape attempt she dodges earlier in the flick.) And whenever Col. Sawyer remembers his wife (Jenny Allford), she’s framed like a music video vixen…or Phoebe Cates in Fast Times at Ridgemont High.

Each of those moments will probably make you roll your eyes, just like the fact that head shots aren’t required to take these particular zombies out. (A little submachine gun burst to their mid-section does the trick.) A final-act revelation surprisingly ties the story to the first film, an impressive feat considering there are no characters from the previous movie because it was set in the 1860s. Perez also tosses in some straight-faced, anti-government crackpot-ery that is (unintentionally) amusing when contrasted with all the campy moments that came before it.

Tweten is the movie’s lead and hero, but has a pretty low-impact screen presence. He’s not aggressively bad, but also doesn’t stand out in an interesting way. To be honest, the armor Col. Sawyer wears left more of an impression: the chest plate made him look a bit like The Punisher, and his headgear made him look like Star-Lord. Levy doesn’t have any lines to butcher as Stephanie, so the character is mostly there to give Sawyer someone to rescue (and to give the target audience someone nice to look at). Meanwhile, Welsh is mostly given Dale things to do as Wilson.

The finale has Col. Sawyer traveling to a dam and trying to clear it of zombies for his fellow survivors. (Alternate title: The Dead and the Dam?) Perez, in his role as cinematographer, tosses in some interesting camera angles for this and other action sequences, which makes me think he might come up with something more polished with a bigger budget.

The Dead and the Damned II ends on a hopeful note, but doesn’t overtly hint at a third installment. That being said, I wouldn’t be surprised to see Perez go back to the well a third time. There are a lot of bad, ultra-cheap zombie movies out there, including this one. But at least there’s a sense of play and energy to these umpteenth undead shenanigans.