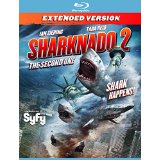 “You know what you just did, don’t you? You jumped the shark.”

People have been mocking SyFy original films since the days when the network spelled its own name properly. But staying home on a Saturday night to “MST3K” your way through flicks with D-list actors and Z-grade visual effects has been replaced by Twitter, which practically blew up when the impossibly campy Sharknado premiered last year. SyFy recognized that social media has made it possible for anyone with Internet access to trade yuks and one-liners on a global scale; more importantly, it has allowed the network to be in on the joke in an unprecedented way.

“This is a twister with teeth.”

The idea behind Sharknado is both ridiculously stupid and devastatingly simple. On one hand, a title like Sharknado tells you precisely what the movie is about and what sort of entertainment you’re in for. Given that there have never been more broadcast/cable/premium channel/streaming options, that sort of instant brand recognition can be very valuable. In other words, you hear the word “sharknado,” and you immediately know whether you’re in or out. The flip side of making a movie called Sharknado is, of course, that you’ve made a film in which sharks are lifted out of the ocean by water spouts and devastate a major city. Even by SyFy’s “Mega Python vs. Gatoroid” standards, that’s pretty outrageous.

“Even the sharknados are tougher in New York.”

It’s taken me longer than usual to get to the synopsis because absolutely no one (not the filmmakers, not the audience, not the shark bait actors) comes to Sharknado 2 for the plot. All you need to know is traumatized hero Fin (Ian Ziering) and his wife April (Tara Reid) are on a flight to New York when they encounter a familiar weather phenomenon. April is on her way to promote her book — “How to Survive a Sharknado” — while Fin is going to visit his little sister Ellen (Kari Wuhrer) and her husband Martin (Mark McGrath). Fin and April arrive in NYC (mostly) intact and race to save the city from the most unnatural of natural disasters.

Look, you don’t need a professional critic (or even someone like me) to tell you that Sharknado 2 is a crappy movie. The good news is practically everyone involved seems to have walked into this ridiculous project with eyes wide open. The very fact that it’s called Sharknado 2: The Second One is a pretty decent tip-off that there’s at least some self-awareness at play here. The better news is that the movie’s mind-numbing badness is frequently broken up by an oddly reassuring sense of playfulness.

In addition to several character names lifted from Jaws, the movie’s opening sequence pays homage to both Airplane! and the classic Twilight Zone episode “Nightmare at 20,000 Feet.” (Airplane! star Robert Hays cameos as the pilot; he also pops up briefly after the end credits.) Hays’ appearance is the first of many tongue-in-cheek cameos, which also include Shark Tank (get it?) star Daymond John, Subway spokesman Jared Fogle hanging out at (you guessed it) a subway station, and Judd Hirsch playing a chatty Taxi driver. Hirsch’s Independence Day co-star Vivica A. Fox plays a former flame of Fin’s and helps solidify the film’s “disaster flick on a shoe-string budget” tone. (As does a laughably corny, Pullman-esque inspirational speech by Fin.) New York is also used to its full, disaster movie effect (Sharknado 2 was actually filmed in parts of the city): the sharks’ path of destruction sees them crashing a Mets game, decapitating the Statue of Liberty, and swarming the Empire State Building during the climax.

Sharknado 2 also moves at a brisk pace; it never feels like more than 10 minutes pass without someone getting their face eaten by a shark. The flip side is that watching these willing and washed-up actors/rappers/reality stars get unconvincingly brutalized becomes eye-rollingly monotonous after a while…at least until the Super Soaker napalm guns and “chainsaw-nado” in the finale. My favorite cameos were actually the straight-faced appearances by the The Today Show’s Matt Lauer and Al Roker, who treated the sharknado like the story of the century.

As for the main cast, Reid is simply horrible, which is saying a lot given that I’m grading her performance on a “sharknado” curve. Ziering is also bad, but the former Beverly Hills 90210 star at least channels an action hero bravado that is hilarious to anyone who ever saw him on Beverly Hills 90210. I’ve said it before, and I’ll say it again: Ian Ziering tries harder at Sharknado than I’ve ever seen anyone try at anything.

Criticizing director Anthony C. Ferrante — who also helmed the first film — and his team for making a fun, brainless film is a tricky proposition because it seems like that’s precisely what they set out to accomplish. The movie is a campy mess; Lauer and Roker make some sort of demented sense, but why is Andy Dick playing a cop, and why is Billy Ray Cyrus playing a doctor.

It’s also lazy in a way that must frustrate filmmakers trying to get their dream projects made, since 90 percent of the thought that went into this movie was done as soon as someone uttered the word “sharknado.” The movie premiered and people either scoffed, or they pointed and laughed. Either way, enough of them tuned in to inspire SyFy to produce a third film for next summer. I’m sure most of us have laughed at a SyFy movie at some point in our lives. But when it comes to Sharknado, the joke might be on us.

Sharknado 2: The Second One is presented in its original 1.78:1 aspect ratio. The 1080p image is arrived at with an AVC MPEG-4 codec at an average of 24 mbps. The bitrate fluctuates wildly, which isn’t surprising given that the image frequently alternates from on-location shots of NYC streets to visual effects that seem to have been created using Microsoft Paint. The palette is predictably gray given the stormy conditions, which doesn’t leave room for a lot of color or fine detail to pop out. (The exception is a hospital room scene between Fin and April, which features some sharp close-ups.) The only time the image truly shines is during the segments that reproduce the HD look of Today Show or Live with Kelly and Michael broadcasts. There are several instances of overwhelming softness (stock footage of a rain delay in at the Mets game; a group bicycling away from a sharknado) which can probably be chalked up to sub-standard filmmaking rather than any failings from this Blu-ray. That being said, although much of Sharknado 2 looks bad by design, this disc doesn’t do much to elevate the film’s visual presentation.

The DTS-HD Master Audio 5.1 track fares a little better. Not surprisingly, it’s an aggressive mix that features plenty of whooshing winds and growling sharks in the surround sound field. Those sound effects and ambient noises harmoniously share space in the rear speakers with the generic thriller score by Christopher Cano and Chris Ridenhour. Unfortunately, it’s also a somewhat inconsistent presentation because those same surround noises tend to check in and out intermittently. It’s especially noticeable during scenes shot on soundstages, like the opening plane sequence. On the other hand, some non-action scenes filmed in New York streets are consistently lively and dynamic. Sub activity is adequate, though it really should’ve been overpowering with all the thunder (and sharks) rocking NYC.

The Making of Sharknado 2: (10:41) Sharknado auteur Anthony C. Ferrante talks about how the franchise was born out of a throwaway line in Leprechaun’s Revenge, another terrible movie that he wrote for SyFy. The featurette also explores the on-location shoot in New York City.

Shark Chum: From the Cutting Room Floor: (8:36) The bonus material includes more of Kelly Ripa and Michael Strahan on the set of their talk show, and a quick moment that only made it into the Canadian version of Sharknado 2: embattled Toronto mayor Rob Ford — or an actor playing him — gets “Deep Blue Sea-ed.” (Hold the phone…there’s a Canadian version of Sharknado 2?!)

Gag Reel: (5:38) “Sharknado 2 Follies” features an old-timey countdown and a bunch of actors and extras screaming and stabbing at cheesy visual effects to be added in post production.

Chomp: The Evolution of Sharknado 2 VFX: (4:08) Speaking of the film’s visual effects, we get comments from Emile Smith (VFX supervisor) and Sasha Burrow (on-set VFX supervisor), which gives us a peek at how certain scenes are shot with an eye toward adding effects shots later. Otherwise this is a straight-faced, highly-earnest look at the work that went into the film’s legendarily shoddy effects. The 800-pound gorilla CGI shark in the room is that no one really acknowledges how hilariously phony and outrageous a lot of the work is.

Cameos: I Can’t Believe They Got…: (10:57) But the thing is, I can *totally* believe they got the likes of Andy Dick, Billy Ray Cyrus, Perez Hilton, Downtown Julie Brown, and Jared “Subway” Fogle to make cameos. The featurette also explores the logistics of making their appearances happen.

Director’s Commentary with stars Ian Ziering and Tara Reid: Ferrante is joined by his two leads for a track that features a lot of joking around and “oohing” and “ouching” when a different actor is mauled by a shark. There are some amusing anecdotes, including Ziering and Reid initially balking at the Sharknado title on the set of the first film (which was originally called Dark Skies). We also hear Ziering point out the on-screen moment where he tripped over a storm drain by accident, and learn that Andy Dick initially played his cameo way too broadly. (Apparently, you can be too broad for Sharknado 2.)

Filmmaker’s Commentary: This time Ferrante is joined by writer Thunder Levin (fantastic name), co-editor Ana Florit, and VFX supervisor Emile Smith. This track mostly focuses on the production side of things, and the filmmakers mention some of the more outlandish gags that had to be nixed. (Pause for a second to consider the things that were too crazy to make it into Sharknado 2.) And instead of a swear jar, the group jokes about having to pay up whenever someone dared use the word “logic.”

Trailers: We don’t usually have much to say about movie trailers. But in addition to the Sharknado 2 clip, there are previews for nine other Asylum flicks with titles like Bermuda Tentacles, Blood Lake and The Co-ed and the Zombie Stoner. (I wish I were making any of those up.)

This is actually an “extended edition” of Sharknado 2, though the additional material largely consists of bonus one-liners and a few more effects shots. I’m more impressed with the relative treasure trove of special features contained in this Blu-ray. (Most of the SyFy-caliber titles I’ve reviewed don’t bother with any bonus material at all.) I also preferred watching the film without all the insipid, idiotic on-screen tweets that accompanied SyFy’s broadcast of the movie

There’s a Sharknado 3 in the works, which isn’t all that surprising considering that — for better and worse — The Second One absolutely lived up (or is it down?) to expectations.