Posted in: Disc Reviews by John Delia on November 7th, 2014 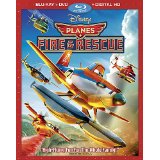 Flying into home entertainment, the animated comedy adventure Planes: Fire & Rescue delivers a fun film for the whole family.  The film features some of the characters from the original and a whole lot of new ones.  Brightly animated, having fine direction and with a new storyline, the film has several good values including heroism and friendship. In this episode we find Dusty Crophopper returning from his around-the-world racing tour and about to participate in annual Corn Festival.  During a practice run with his flight instructor Skipper, the gearbox in Dusty’s airplane gets damaged.  Not having another gearbox because the model is out of production, Dusty finds himself having to slow down.  Following a fire he caused, Dusty volunteers as a firefighter.

The film continues showing his training and later his heroism during a huge forest fire that threatens a vacation lodge. Director Roberts Gannaway keeps his film exciting and interesting showing how the different planes and ground firefighters work together to fight fires.  Introducing many new characters including Dipper, an airplane that drops water from the air onto fires, Blade, a helicopter that guides the aircrafts to the fire, Windlifter, who carries the ground crew, and the Jumpers, a group of vehicles that clear trees to stop the fires from spreading.   The film shows the heroism of the characters, their self-sacrifice and the importance of training to do the job right in order to save lives.

I found the sequel better than the first outing for Planes.  The situations, adventure and story are more fascinating and the characters out of the ordinary.  The children will like the quest that Dusty has to make in spite of his injury and his narrow escapes from danger.  Adults should find the film adventurous as well with heartwarming lifesaving scenes and some adult inferences that are hilarious.

Planes: Fire & Rescue is presented in its original aspect ratio of 2.39:1. The 1080p image is arrived at with an AVC MPEG-4 codec at an average 25 mbps. The clarity and color of this digitally mastered film is superb and transferred from the screen with no distortion whatsoever.  The widescreen letterbox shows the whole film with no film loss from each side.  The water scenes look like live action, and the fires are very realistic.

The DTS-HD Master Audio 7.1 comes across clean and clear through my television speakers.  I ramped up the sound with my upgraded system, and there was no distortion detected. Surrounds are surprisingly aggressive, giving one plenty of ear candy to enjoy. Subs aren’t going to rattle your room very much, but there’s a fullness to the sound that keeps it all dynamic enough.

Vitaminamulch: Air Spectacular: (5:55) an  animated short where Dusty has to impersonate another airplane so the show can go on.

Dipper: (1:45) an animated short featuring the airplane that dips into the lakes to get water to fight fires.

Smoke Jumpers: (1:44) an animated short featuring the vehicles that get dropped into the fire zone to fight fires

Welcome to Piston Peak!: (2:49) an animated travelogue of the area where Dusty lives.

CHoPs TV Promo: (:44) A funny takeoff on the helicopter characters in the film.

Air Attack: Firefighters from the Sky: (4:48) A live-action feature on actual firefighters and how the animators went to see them to develop their characters.

Deleted Scenes: (4:32) There are three with optional play-all and filmmaker introductions.

A very good film for the whole family.

John Delia has been on all sides of the movie business from publicity, writing for publications and on line blogs, script writing, to film making. Writer, critic, film editor he has worked as a film critic on this second go around for 14 years. He earned his Bachelor’s degree at the college of Journalism and Communications at the University of Florida in Gainesville, Florida. John is an active member of the Southeastern Film Critics Association (SEFCA) . Favorite Films: Lord of the Rings/Hobbit trilogies, The Godfather trilogy, the Indiana Jones trilogy (I didn't like the 4th), The Avengers and for TV it's Game of Thrones. As for animation it's a tie between anything Pixar and everything Hayao Miyazaki.
The Newsroom: The Complete Second Season (Blu-ray) Interstellar