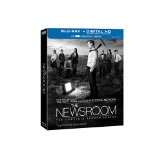 – “We don’t have the trust of the public anymore.”

The Newsroom took a pretty decent beating during its first season. Sure, plenty of people praised the show’s exceptional acting and ambition, but too much of the conversation seemed to revolve around its flaws and its polarizing creator. In this Blu-ray set’s bonus material, Aaron Sorkin cops to being “overly earnest” and “aggressively uncool” in his work. Season 2 of The Newsroom represents an improvement for a show I already liked a lot, thanks to a similar willingness to self-examine and adjust.

“Tonight we tell you the story of Operation Genoa, a made-for-Hollywood tale of a daring rescue mission.”

Towards the end of The Newsroom pilot, it was revealed that the show takes place in the near past. The conceit allowed Sorkin and his quixotic Atlantis Cable News team — led by “News Night” anchor Will McAvoy (Emmy winner Jeff Daniels) — to cover real-life events (the BP oil spill, the killing of Osama bin Laden, etc.) with the benefit of hindsight. Season 2 moves away from the more procedural, headline-of-the-week format by introducing a fictional season-long storyline that plays directly to Sorkin’s strengths.

The season 2 premiere — titled “First Thing We Do, Let’s Kill All the Lawyers” — opens with a device that is instantly recognizable to anyone familiar with Sorkin’s Oscar-winning Social Network screenplay. (Or the courtroom rhythms of A Few Good Men; Sorkin wrote both the movie and the play it was based on.) Recurring guest star Marcia Gay Harden holds court at a large conference table as Rebecca Halliday, a high-priced lawyer retained by ACN. She starts by trading rapid-fire quips with Will and proceeds to grill other key ACN staff members throughout the season about some calamity-to-be-named later.

The “News Night” staff put a major target on its back during the first season with its high-minded mission to cut out the nonsense and report the news properly. More specifically, Will angered a lot of people when he referred to the Tea Party as the “American Taliban.” The scenes with Harden make it clear that something else has gone horribly wrong.

“If 17 different things hadn’t conspired in just the right order, we wouldn’t be sitting here.”

Those opening minutes of “First Thing We Do, Let’s Kill All the Lawyers” do a masterful job of laying the groundwork for the rest of the season. For example, why the heck is formerly bright-eyed associate producer Maggie Jordan (Alison Pill) saddled with such an atrocious haircut? (The answer is appropriately emotional, even if it doesn’t take full advantage of one of The Newsroom’s rare forays outside its East Coast bubble.) Season 2 concludes with Election Night 2012, but the premiere flashes back to August 2011 to show all the events that led to ACN’s current crisis.

Much to the chagrin — or maybe delight — of people who love to hate The Newsroom, most of those events are the result of messy romantic entanglements. Both Maggie and good-guy senior producer Jim Harper (John Gallagher Jr.) temporarily leave ACN’s New York newsroom following the mess created by their mutual attraction to each other. Will is still wounded by a years-ago betrayal from his dedicated, daffy executive producer/ex-girlfriend MacKenzie McHale (Emily Mortimer). The premiere even finds time for socially awkward economist Sloan Sabbith (Olivia Munn) to fumble through the ill-fated romantic pass she made at jerk-with-a-heart-of-gold exec producer Don Keefer (Thomas Sadoski). Heck, even the season’s best scene — a fiercely hilarious tour-de-force that singlehandedly earned Jane Fonda her second Emmy nomination for this show — has company CEO Leona Lansing making repeated, wonderfully out-of-left-field references to her love for Daniel Craig.

The Newsroom remains, I’d argue, the most Sorkin-y thing Sorkin has done yet. (He doesn’t have to share the reigns with an imposing fellow artist like Social Network director David Fincher.) That means, for better and worse, Sorkin’s love of Broadway musicals, hatred of the Internet and fondness for the rat-a-tat dialogue of screwball comedies are forever embedded in the show’s DNA. (To be fair, after Will randomly asks an intern to research all the Broadway musicals that also won the Pulitzer Prize for Drama, the season is pretty light on the Broadway references.) Although Neal Sampat (Dev Patel) — ACN’s resident blogger/internet expert — actually gets a whiff of a substantial storyline this year, it’s probably no accident the show’s web guru is saddled with the most trivial, time-wasting tasks. (Updating MacKenzie’s Wikipedia page; tracking down the person who anonymously bid on one of Sloan’s books in an auction.)

Many of the show’s best scenes simply involve 2-4 of the characters hanging out in Will or news division president Charlie Skinner’s (Sam Waterston) office and trading sharp, silly banter with one another. The Newsroom moments that tend to get the most attention involve Sorkin’s Will’s on-air diatribes aimed at the more extreme members of the Republican Party. (Will himself is presented as a moderate Republican.) Despite a four-episode arc that places pesky Jim on a Mitt Romney press bus in New Hampshire, season 2 actually backed off in that regard. The show nods to the George Zimmerman and Troy Davis cases, but Will’s most pointed takedown is of a misguided Occupy Wall Street spokeswoman (guest star Aya Cash) in Ep. 4/“Unintended Consequences.”

Although the season wraps up with a two-parter centered around the last presidential election, the year’s biggest antagonist isn’t so much political as he is opportunistic. The Operation Genoa plot is driven by ambitious producer Jerry Dantana (humorless, boo-able guest star Hamish Linklater), whose irresponsible actions get ACN into the hottest of water. It’s a gripping season-long arc that doubles as a nightmare for responsible journalists. I also enjoyed Jim’s stint on the Romney bus — which featured guest stars Grace Gummer as fellow reporter Hallie Shea, and Constance Zimmer as snappy Romney spokeswoman Taylor Warren — and Ep. 5/“News Night with Will McAvoy,” the real-time episode set during one of Will’s newscasts.

Ironically, I’d liken the first season of The Newsroom to the incendiary, all-consuming chemical weapons that play such a big part in season 2. I found this batch of episodes to be sharper and more expertly constructed while remaining as vibrant and infuriating (in an interesting way) as ever.

The Newsroom: The Complete Second Season is presented in its original aspect ratio of 1.78:1. The 1080p image is arrived at with an AVC MPEG-4 codec at an average of 25 mpbs. The show’s standout pilot was shot on somewhat grittier-looking film, but the rest of the season 1 episodes were shot digitally. This season 2 set retains the slicker digital look for its entirety, and it pays off by giving us a cleaner, more detailed look at ACN’s state-of-the-art TV studio and newsroom. Color and contrast remain strong, as do the warm, pleasingly-nuanced fleshed tones. The one visual departure for the show is a jaunt to Africa that brings the expected golden yellow palette and overexposed image to give the impression of harsh sunlight. This isn’t as obvious as dazzler as other HBO HD offerings, but it’s a very strong effort nonetheless.

The DTS-HD Master Audio 5.1 track seems to be keenly aware that — no matter how great Daniels and the rest of the cast are — Sorkin’s dialogue is the real star of the show. Not only are the words always clear and crisp, but the track juggles the constant overlapping dialogue beautifully, especially during any hectic “News Night” broadcast. The audio track’s second most important job on an Aaron Sorkin show is bringing the buzzy workplace scenes to life. Here, we get a dynamic sound field with sneaky directionality that utilizes the rears consistently without ever overwhelming the action up front. The subs are pretty quiet throughout — except for a brief thunderstorm in Ep. 3/”Willie Pete” —  but we still get a solid sense of immersion no matter where the action is taking place. The track also springs to life during episode-closing musical interludes that feature The Who’s “You Better You Bet” and Willie Nelson’s “Always On My Mind.”

Inside the Episodes: (26:27) These brief, behind-the-scenes clips accompany each episode and feature Sorkin talking about key themes and production issues. Although none of them are over five minutes long, there’s some good insight to be found here. For example, Sorkin doesn’t believe the Operation Genoa storyline broke his rule about only doing real-life stories on the show because it turned out that Genoa never happened, so there was no (fake) story for ACN to cover. We also learn the George Zimmerman-related flub Maggie makes was inspired by a real incident.

Audio Commentaries: There are commentary tracks available for Eps. 1, 5, 7, and 9. They feature the likes of Sorkin, producer-director Alan Poul, director Anthony Hemingway, and actors Daniels, Mortimer, Waterston, Sadoski, Munn, Linklater, and Zimmer. Though they can feel a little overstuffed with too many people and chatter, they’re certainly worth a listen for both production insight (Sorkin talks about a deleted storyline with Patton Oswalt as a VP of Human Resources at ACN) and amusing anecdotes (apparently fans have been harrassing Linklater on the street after watching his antagonistic work on the show).

Deleted Scenes: (3:25) There are only two deleted scenes, one each in the season premiere (2:16) and the finale (1:09). The better of the bunch shows us a bit of the fantasy football draft the characters kept alluding to in the premiere. (Warning: you might be appalled by Sloan drafting Tony Gonzalez with the third overall pick.)

I happen to love The Newsroom, but I also realize the left-leaning show is completely unwatchable for a lot of viewers. That’s perfectly understandable, but I feel like some people confuse ACN’s mission (putting on a substantial, even-handed news program) with the mission of The Newsroom, which is to be an extremely well-made, and compelling drama series that doesn’t really have to carry the responsibility of being fair or balanced.

The third and final(?) season of The Newsroom premieres Sunday night. Although the Season 2 Blu-ray set features less bonus material than its predecessor, this is still another impressive effort from HBO. Your enjoyment of this show basically comes down to what you think of Sorkin and his style. (And I happen to think he’s an unparalleled talent.)