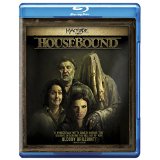 Laughing out loud and getting startled out of your wits are two of the most visceral reactions you can have as a moviegoer. For a director to elicit either reaction is challenging enough, which is why I was so delighted to be feeling both during the thrilling, funny finale of Housebound. It’s an even more impressive feat when you consider it was accomplished by a first-time filmmaker working on a shoestring budget.

We first meet Kylie Bucknell (Morgana O’Reilly) as she and an accomplice comically fail to steal money from an ATM. She is a professional screw-up who has battled alcohol and meth addiction. Instead of sending Kylie to her umpteenth rehab program, the judge sentences her to eight months of house arrest at her family’s rustic home. Given Kylie’s unpleasant childhood memories there and the fact that she now has to share space with batty, blabbermouth mom Miriam (Rima Te Wiata), it seems like Kylie might have preferred spending time in prison.

And that’s before mom tells her the house might be haunted.

“You know, the closed mind is the worst defense against the paranormal.”

Miriam has been hearing unexplained noises in the family’s spooky basement. She even caught a glimpse of a ghostly figure in a white sheet. (Nobody said this ghost had to be original.) Kylie totally dismisses her mother until she starts experiencing strange occurrences herself. Turns out the house has a very violent past that could be haunting Kylie in the present. The duo enlist the help of Amos (Glen-Paul Waru), the affable security guard who monitors Kylie’s ankle monitor. Amos is eager to believe in the supernatural, but hard evidence is hard to come by. Are Kylie and Miriam really being haunted by a ghost? Or is the terror they’re experiencing the result of respectively drug-addled or kooky minds?

– “What are you gonna do against a hostile spirit?”

Writer-director Gerard Johnstone throws in some misdirection — one overly creepy character’s name could’ve easily been Red Herring — but ultimately delivers a somewhat ridiculous yet oddly-satisfying resolution to the mystery of the ghost. (The film’s sunny coda, however, felt a little abrupt.) Still, the real pleasures in this New Zealand production come from the way the filmmakers deftly balance laughs and thrills; the climactic sequence prominently features a cheese grater and a laundry basket as weapons. They also nod to an impressive variety of films.

Johnstone has name checked movies like The Changeling, The Legend of Hell House, and The People Under the Stairs as inspirations. A fun pair of set pieces involving a creepy talking teddy bear recall Child’s Play followed by a hint of Psycho. Kylie being stuck in her house reminded me of another Hitchcock classic (Rear Window), and the movie also throws in a dash of To Kill a Mockingbird for good measure. Cramming all of those references into a single movie seems like a recipe for disaster, but Johnstone has made a clever, assured feature film debut with Housebound.

It’s also one that is brimming with affection for the genre. More than any other movie referenced in the story, Housebound reminds me of what Edgar Wright and  Simon Pegg did with Shaun of the Dead and Hot Fuzz; skewering a certain type of movie with pinpoint precision, while also displaying loads of affection for the conventions that are being mocked. Housebound cranks up the thriller score and jump scares to ridiculous degrees. (More on that in the Audio section.) Those (intentionally) cheap thrills are nicely balanced by a knowing script. For example, instead of being met with instant skepticism, Kylie immediately finds a willing ally in Amos. (The skepticism comes a little later from others.) The story also makes a credible case that there are no ghosts at all; maybe Kylie is so bored and miserable in her house arrest that her mind is working overtime to see things that aren’t there. Early on, Kylie really isthe one who is terrorizing everyone around her in a variety of ways.

O’Reilly delivers a strong lead performance as a sort of heroine we’re not used to seeing in this type of film. Rather than a shrinking, shrieking violet, Kylie is ticked off at the world and responds by fighting back. It’s potentially abrasive work that is complemented well by Te Wiata’s perfectly calibrated cluelessness as Miriam and Waru’s exasperated friendliness as Amos. Waru’s deliver of the line, “You can’t punch an ectoplasm”  is one of the film’s highlights.

It may be impossible to strike a spirit, but that didn’t stop the people who made Housebound from hitting back at any recent ghost story that  took itself too seriously and lost sight of the fact that this is supposed to be fun.

Housebound is presented in an aspect ratio of 2.40:1. The 1080p image is arrived at with an AVC MPEG-4 codec at an average of 20 mbps. The visual presentation is the one place where the project’s low-budget origins (slightly) reveal themselves. (Housebound was made for $350,000 New Zealand dollars, which translates to about $275,000 American dollars.) This is still an admirably handsome-looking film, especially when the action shifts to the main spooky house. Black levels are generally inky (Kylie’s Goth-ish black hair), but don’t always offer pitch perfect separation for sequences in the dark. Overall, the baseline HD image is occasionally soft, lightly drained of color, and gritty. Fortunately, the latter two qualities actually suit this material quite well.

The DTS-HD Master Audio 5.1 track has a lot of work to do. Sound design is a very active part of this production, and the track uses every speaker in a kinetic way that makes each creaky floorboard, creepy laughing noise, and annoying cell phone ring come to life. The subs get a pretty decent workout as well, since they’re effectively used to punctuate each of the film’s over-the-top jump scares. The rear speakers are actually rather quiet in terms of ambient noise — especially when you consider the film’s woodsy setting — but the silence makes the explosions of sound stand out even more. Dialogue is clear and largely intelligible, which is key given the variety of thick Kiwi accents on display.

Commentary by the Filmmakers: In this case, “the filmmakers” are writer/director Gerard Johnstone, producer Luke Sharpe, and executive producer Ant Timpson. They start off by proclaiming this “the Greatest Audio Commentary of All Time.” It doesn’t quite reach those heights, but this cheeky, free-wheeling chat is still worth a listen. (The trio proceed to name their own favorite commentary tracks.) When they get around to talking about Housebound, the trio addresses the difficulties of finding the right house, drop Peter Jackson’s name, and heckle their own movie.

Deleted Scenes: (3:59) Instead of an optional commentary, a written explanation precedes each scene and tells us why they were each cut. (A stairwell argument between Kylie and Miriam was well-acted, but deemed to dramatic.) There are three scenes, and they are presented in HD.

Housebound is a hard movie to pin down, which is actually what I really like about it. It’s not as outright insane as the movies that New Zealand Filmmaking Godfather Peter Jackson made (Bad Taste, Meet the Feebles, Dead Alive)  before setting up residence in Middle Earth, but it does have the same sort of anarchic flair. (Plus, the movie’s best kill splatters enough blood to make Young Peter Jackson proud.)

The movie is also not overtly wacky with its comedy; the humor actually comes from knowing the way horror thrillers are *supposed* to go. Give this one a look if you’re in the mood for a somewhat askew take on the genre (and if you don’t mind semi-thick New Zealand accents).