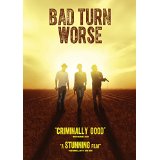 “There are 32 ways to tell a story, but there’s only ever one plot…that things are not what they seem.”

Early on in Bad Turn Worse, a character mentions this maxim credited to writer Jim Thompson (“The Grifters”, “The Killer Inside Me”) apropos of almost nothing. It’s kind of a clunky, inauthentic interjection, but the message is clear and crafty: directors Simon and Zeke Hawkins know they’re not re-inventing the wheel in terms of plot, so where they really hope to grab your attention is in how they present their stylish, well-acted feature film debut.

And when you’re talking about a neo-noirsh crime drama involving double-crosses, sociopaths, safes full of cash, and a love triangle, it feels like the story has been told closer to 100 different ways. Bad Turn Worse is about three Texas friends: Bobby (Jeremy Allen White) and Sue (Mackenzie Davis) are wiling away their last days of freedom before heading to college. B.J. (Logan Huffman) is Bobby’s gregarious, dunderheaded best friend — and Sue’s boyfriend — who wants to send the more academic pair off in style. The trio travels to Corpus Christi for a weekend of fun at B.J.’s expense…well, not exactly.

You see the reason B.J. could afford to treat his friends to such a rousing good time is because he stole $20,000 from a safe belonging to his boss Giff (Mark Pellegrino). It’s a particularly bad idea when you consider that Giff is a violent psychopath who hatches a scheme of his own. Giff forces Bobby, Sue, and B.J. to rob his own boss Big Red (William Devane), a gangster who operates a money laundering scheme out of the local cotton mill. As if the threat of being killed by Giff weren’t enough of a problem, the young trio begins to fracture as Sue drifts away from B.J. and toward Bobby.

The fact that Sue ends up coming between the two boys is just one of a number of predictable flourishes in Bad Turn Worse, which (naturally) channels Thompson’s work along with some of the Coen Bros’ pulpier crime stories. (Particularly the dusty, down-home desolation of movies like Blood Simple and No Country For Old Men.) Bad Turn Worse doesn’t quite live up to those inspirations, but there’s plenty here to suggest the Hawkins brothers are worth keeping an eye on going forward. (Especially when they get their hands on a more fully-formed script.)

Bad Turn Worse opens with the dark, dialogue-free sequence of B.J. robbing Giff’s safe, and the brothers display a nice knack for visual storytelling. (The darkness is pierced by a disruptive fire.) And despite the movie’s expansive Texas setting, the three main characters are often shot in a close-up, claustrophobic manner that intensifies their desire to escape. (Bobby and Sue departig for college; B.J. being desperate not to stay stuck in his cotton mill hometown forever.) I wish the middle section of the film had explored those themes a little more deeply instead of defaulting to the Bobby/Sue/B.J. triangle as often as it did. The script by Dutch Southern — that’s seriously the name of the credited screenwriter — does feature an entertaining digression with Jon Gries (Napoleon Dynamite) as a folksy, cheerfully unhelpful sheriff. On the other hand, I’m not sure the film needed *two* separate instances where one character offers a woman money to perform a certain sex act.

The middle portion remains watchable largely because of strong performances from the central trio. The characters themselves are sketches — the good guy, the smart girl, the wild card — but the actors each provide enough interesting color to fill in the empty spots. (Huffman, in particular, takes to his sociopathic role with gusto.) Speaking of sociopathic gusto, Pellegrino tears into the part of Giff and provides a crucial, charismatic sense of danger even when he’s not on screen. Even Supernatural fans who know the actor as Lucifer are likely to find him scary here. Meanwhile, Devane — the other recognizable name/face in the cast — doesn’t appear until the final five minutes in what is essentially a walk-on role.

The 92-minute film moves at a brisk pace, but the confidence with which the Hawkins brothers let the story unfold keeps it from feeling rushed. As a result, there’s a better chance you won’t be quite as bothered by, for example, how quickly and easily the three main characters accept their massively dangerous task. (There’s even a cheeky sequence outlining the impending heist that seems to make a mockery out of the serious trouble these three teens are in.) In the end, things are pretty much precisely what they seem in Bad Turns Worse, but the movie still finds an interesting way to tell a story we’ve seen many times before.