Posted in: Disc Reviews by Archive Authors on April 29th, 2015 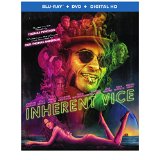 Inherent Vice is the kind of movie I personally love to watch over and over again, partly because it is always tantalizing you with content that you can’t quite get your head wrapped around. Almost anyone would want to see this more than once, even if only to make sure they weren’t stupid for not connecting all the dots. The film has a classy, fun pedigree combing the talents of Paul Thomas Anderson and Thomas Pynchon. Paul is the beloved director of modern classics like Boogie Nights, Magnolia, and There Will Be Blood. Thomas is the novelist of unfathomable masterpieces like Gravity’s Rainbow and V. Both are titans in the cultural zeitgeist of the academic and the bohemian. They both are supremely confident to put together a plot that flies high above our heads. It is also a detective story, but the gumshoe or private dick in this case is a hippie. The story takes place in 1970 and is immersed in the smoke of the period. It is also immersed in a period authentic string of 70’s tunes and wild psychedelic set decoration and groovy duds. It would be pointless to start to outline the plot, partly because the plot is beside the point. The point is to feel the vibe. To settle back, take a deep breath, and hold it in. Hippies are not likely candidates to be private eyes, but it is the perfect way to get a cross section of a time and place. This time and place is as foreign to us today as is Moses in the desert.

If I won’t give you a plot, I will give you a cast of characters. Larry “Doc” Sportello (Joaquin Phoenix) gets a visit from his ex, Shasta Fay Hepworth (Katherine Waterson). She wants his help with a problem. Shasta is the mistress of Michael Z. Wolfmann (Eric Roberts) and he seems to be the target of a plot to get his money. Tariq Khahlil (Michael Kenneth Williams) stops by the dentist’s office where Doc works to give him a job, that also ties to Wolfmann. Our unreliable narrator, Sortelege (Joanna Newsome) seems to float through the story as character as much as a ghost. Jade (Hong Chau) is a sweet Asian hooker who helps out when she can, especially when trying to warn him about “The Golden Fang”. Lieutenant detective Christian F. “Bigfoot” Bjornsen (Josh Brolin) has a bit of a man crush on Doc when he isn’t slapping him around and kicking his door in. Sauncho Smilex, Esq. (Benicio Del Toro) shows up to “help” Doc (but sometimes you’re not so sure). Hope Harlingen (Jena Malone) hires Doc to find her dead husband, Coy (Owen Wilson). They are all mutual acquaintances of Shasta, who has also gone missing, as has Wolfmann. Deputy D.A. Penny Kimball (Reese Witherspoon) is involved because the F.B.I. is involved, but she is also Doc’s current squeeze. A little later, we meet Dr. Rudy Blatnoyd, D.D.S. (Martin Short). He is a dentist but also the probable head of a heroine syndicate ensconced in a high rise that looks like a golden fang. Don’t think anything I have told you is in any way a summary.

It should be noted that this project is Anderson’s attempt to translate someone else’s writing as opposed to writing himself. He felt that Pynchon was someone worthy of such a challenge. They are both idiosyncratic and given to the offbeat.

Now fans of Pynchon might be happier than Anderson’s fans with the final results. Anderson clearly was devoted to making the best Pynchon movie he could, which is not necessarily what Anderson fans want. I don’t think Pynchon or Anderson give a flying fig. They clearly had fun.

Inherent Vice is presented in its original aspect ratio of 1.85:1. The 1080p image is arrived at with an AVC MPEG-4 codec at an average 30-35 mbps. You’re going to get an atmospheric high-definition image presentation here. There’s a bit of grain that works perfectly with the period and hazy nature of the film. The color is often saturated, and little of the image’s colors are reference, just as was intended. It’s a world that is absolutely rich in detail. The grain also gives life to those nearly still moments where Phoenix is working his magic with a puzzled or whimiscal expression. It allows the camera to linger, looking like you just paused the film. It’s a challenging image, to be sure. There are moments that are not intended to be sharp, but then you get pulled into an extremely razor-sharp image to remind you that it’s all there when it is intended. This is a completely atmospheric film that would have been crushed with brightening colors or cleaning up the flaws. It’s not even appropriate to call them flaws. Everything you see is exactly as it was intended to be. Minor digital noise offers slight moments of distraction, but nothing you can’t live with.

The DTS-HD Master Audio 5.1 is almost nothing but dialog. Most other sounds are muted. You have to strain to hear all but a few musical cues. The audio presentation sucks us in to try and pick up on the subtle sounds. But it’s the stylistic dialog that is most important here. Delivery of lines is not always clear, and you’ll have to pay attention or make use of the subtitles. That’s not because of competing noise; it’s merely the true-to-form characters.

Inherent Vice is a comedy wrapped in a mystery inside an enigma. This movie has often been compared to the Coen brothers’ The Big Lebowski, and it is a good comparison, because they are both immersed in the stoner mentality. If you are not a stoner, or your friends are not stoners, you’re probably not gonna grok the proceedings. Grok, by the way, is a phrase from the time period meaning to merge, blend, and lose identity in the group experience. If you can’t grok, you just won’t get it.