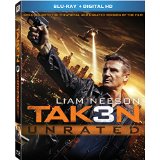 “You do know the combination, don’t you?”

It’s a Taken film, and the third one in the series. You should have the ingredients down by now. Let’s run through the checklist, shall we? You’ve got your daring escapes, check. You have some awesome car chases with a lot of mashed-up metal, check. You’ve got some torture, of course. Waterboarding is in these days. You have the standard carnage level, check. And check. It’s all there, but credit the folks behind the franchise for finding ways to deliver every last drop of the expected stuff and still turn the third part of a trilogy on its head enough to make it more interesting than the previous two films. Or were you expecting pretty much more of the same?

“Don’t be such a pessimist.”

No need to really introduce Bryan Mills (Neeson) to anyone. He’s the ex-CIA operative with a unique set of skills. For the last two films he’s been using those skills not to protect his country, but rather to protect his wife and daughter. Now he’s failed on one count. His now ex-wife Lenore (Janssen) has been murdered, and Bryan’s being set up as the fall guy. Now, those daring escapes have the added complication that while he wants to elude the police, he doesn’t want to actually hurt them. Still, he’s got to stay free to find the real killer. Unlike a certain former NFL running back, he hasn’t been searching the golf courses and country clubs. There’s a riddle to be solved, and he needs time to get through it. Of course, folks are going to have to get shot along the way. And this time he has a smart detective on his tail by the name of Franck Dotzler (Whitaker).

Here’s where the film separates itself from the others. The cat-and-mouse game is essentially between two good guys. There’s a dynamic here that was completely missing in the other films. Think Harrison Ford and Tommy Lee Jones from The Fugitive. There’s even a scene where they finally speak, albeit on the phone, and there’s no dramatic jump into a power station’s turbines. But the gist is really the same. Bryan wants to declare his innocence, and Dotzler gives him the “it’s my job to bring you in and someone else’s to worry about” guilt. It’s a defining moment here even if it is over the phone. Whitaker is a strong presence, and the chase is just so much more fun now. Add the flip-flop of Bryan now being hunted as well as hunting ,and you have yourself a better ride than you thought you strapped in for. Often you hear someone connected with a franchise talk about turning it on its head. I really think it’s true here.

With the addition of Whitaker, the cast is better than the previous films. We also see the return of Maggie Grace as daughter Kim. Somehow she’s quite a bit better here. I often found her a bit annoying in the previous films. She’s got just the right amount of screen time and just the right amount of things to do. Bryan’s team get to play a little more of a role in this one. Bryan takes advantage of the Rabbit Hole, a stash/safe house to serve as his base of operations. That means the help of Sam (Orser), the communications wizard, Casey (Gries), the munitions expert, and Bernard (Warshofsky), the trained sniper. With these guys watching his back there’s more room for some intricate missions. These guys act like they’ve really been together a long time. This is the kind of subtle chemistry that keeps things entertaining. Dougray Scott takes over as Stuart St. John, Lenore’s current husband. The part was originally played by Xander Berkeley in the first film. Scott is much more dynamic in the role, which is good, because he figures much more prominently in this one. Sam Spruell is the underused character here as Malankov, a Russian black ops guy. He looks like such a little guy, but he’s as mean and cold as they come. Of course, we don’t get to see much of Famke Janssen because of… you know… the whole getting killed thing.

This is the first Taken film that takes place in the United States. The film stays in L.A. even if the shooting crew did not. Spain was used for many of the locations, most particularly the highway locations for the big car chase. The use of Spain is pretty seamless with the actual L.A. material, and I have to say it all took me by surprise to discover how much of the film was made in Spain. Good job by production design and location managers of doing the homework going in.

Most of this movie is straight action adventure. Liam Neeson has pretty much established himself in the genre. Of course, his recent tirade on guns and gun control run a bit counter to his action roles. I find it more than a little bit hypocritical. Eastwood’s Dirty Harry once said that there’s nothing wrong with a lot of shooting as long as the right people get shot. Maybe Neeson needs to consider doing his anti-gun shtick to an empty chair.

Taken 3 is presented in its original aspect ratio of 2.39:1. The 1080p image is arrived at with an AVC MPEG-4 codec at an average 30 mbps. The high-definition image presentation is pretty solid. This one was shot on film, and I can’t tell you how much it shows. There’s still an organic feel that comes with celluloid that I still can’t get enough of. There’s plenty of sharpness even if the action moves too fast to appreciate the fine detail. When it does slow down enough, it’s all there. Neeson has that certain look when he’s puzzling things out, and I found those shots to be priceless here. Black levels are superior, offering very precise shadow definition and inky blacks when called for.

The DTS-HD Master Audio 5.1 is going to be an active one. Your subs are going to resonate with the explosions. Surrounds will zing bullets around your head, and the score is often quite exhilarating. In all of this mayhem you can expect the dialog and often witty chatter to come through just fine. This is absolutely an immersive audio presentation.

Deleted Scene: (7:16) This is a flashback sequence for the Malankov character.

Sam’s Bunker aka The Rabbit’s Hole: (3:01) You can play very small bits individually or all as one. The Sam character gets you familiar with the tech Bryan uses as if he’s preparing you for your own mission.

Taken To L.A.: (4:16) A look at the L.A. locations more as a setting for this film to set it apart from the other two. You’ll see the Spain locations that sub for L.A. as well.

A Taken Legacy: (4:54) A look at the trilogy with clips from all three films.

From all appearances, this one is being billed as the last. I think it’s one of the best, and there’s certainly more storytelling that could be done. I would love to see more of an ensemble film using even more of the team. That’s material that is mined best here, but we still don’t get enough. What really counts, however, is box office. While I think this is the best of the trilogy, it brought in the least cash domestic and not as much as the first when you count the growing global box office figures. The budget was higher. Neeson appears to be done, and I might just believe him, but who knows? “I know what you’re thinking…keep it to yourself.”

Gino Sassani is a member of the Southeastern Film Critic's Association (SEFCA). He is a film and television critic based in Tampa, Florida. He's also the Senior Editor here at Upcomingdiscs. Gino started reviewing films in the early 1990's as a segment of his local television show Focus. He's an award-winning recording artist for Omega Records. Gino is currently working on his 8th album Merchants & Mercenaries. Gino took over Upcomingdiscs Dec 1, 2008. He works out of a home theater he calls The Reel World. Favorite films: The Godfather, The Godfather Part II, The Body Snatcher (Val Lewton film with Karloff and Lugosi, not the pod people film), Unforgiven, Gladiator, The Lion King, Jaws, Son Of Frankenstein, The Good, The Bad And The Ugly, and Monsters, Inc.
Inherent Vice (Blu-ray) The Mentalist: Season 7