Posted in: Disc Reviews by Archive Authors on June 2nd, 2015 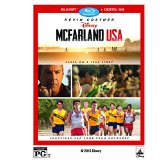 The town of McFarland, California is North of Los Angeles and South of San Jose. More specifically, it is near Bakersfield and not too far south of Fresno. San Diego is practically spitting distance from Tijuana. I say this because much of California is alien to me. The movie McFarland, USA is about delving into the realities of California. Forget that this is a feel-good sports movie for a minute. This is a movie about the Latino experience from a true story about a coach from 1987, but the film updates some of the changes that have taken place since then. Today Latinos make up 39% of the population of California, making them the largest segment of California society. It is no secret that the trends toward America becoming predominantly Latino are still a ways off, but very real. The point is that America is changing, so get used to it. We are all Americans.

This film is very positive and inspiring, but often in ways that are unexpected. It is about how we can find value in the most unexpected places, and the new America is just as proud and strong. It is about hard-working people who are among the poorest in the country who can been seen as a reserve of unexpected strength.

Jim White (Kevin Costner) is not perfect. That’s why he lost a good job at a good school as a football coach. He struggles to find a job and can only find one that is across the street from a prison. That’s because it is in one of the poorest places in the country. When Jim moves his family there, he is constantly confronting culture shock. The only restaurant serves food he doesn’t understand. The wall in the house he was given has a mural of the Virgin Mary. He sees a gang cruising the streets and expects his worst fears to be confirmed. He learns over time that many of his preconceptions about life were wrong. Jim immediately gets in trouble in his job as assistant to the football coach. Thankfully, he still has a couple of other jobs at the school. As the physical education teacher, he comes to see other possibilities for his students than his original preconceptions. Jim creates a cross country track team where one wasn’t there before. Everyone thinks he’s crazy.

The film works on two tracks. One is the inspirational sports film, which we all know will make us leave the theater feeling good. The other is showing how Americans assimilate. Jim is a white American (actually named White, no less). Both sides are wary and uncertain how things will work, but they do. Americans have been doing this for a couple of centuries, not always so successfully. Maybe we are getting smarter. The secret of America is always making its diversity work for it. It is the land of opportunity, and it is never more clear than in a film like this. All the young men in this film become better when they strive for a dream that seems out of their grasp. It is also interesting how well Jim’s two daughters adapt to their new circumstances as aliens in their own country.

Costner is actually getting better and better as an actor lately, after taking time off to start a new family in recent years. Both McFarland, USA and Black And White, two recent Costner films, show an actor game for anything. I’ve always thought Costner was a terrific screen actor, but more truth and reality is showing through all the time. All the faults and strengths of a man struggling to make things work under the most difficult circumstances come shining through. Costner is definitely showing his age, which makes him seem even more human and real. The rest of the cast is great, including the always-dependable Maria Bello in the thankless role as the long-suffering wife.

McFarland USA is presented in its original aspect ratio of 2.39:1. The 1080p image is arrived at with an AVC MPEG-4 codec at a very constant bit rate of 35 mbps. The high-definition image presentation provides a warm color palette. There’s a lot of orange and brown in the tone. Contrast provides the best example of the quality of the image. Most of the locations and colors are drab. When you set this off with the bright reds of the uniforms and the rather nice vistas where the team goes to compete, you get quite a natural study in contrast. Black levels are more average with little in the way of inky blacks or fine shadow definition. Still, this is a relatively average image marred by softness and a lack of any real texture. Likely much of this is intentional.

The DTS-HD Master Audio 5.1 is really only there to service the dialog. The score gives up some sweeping dynamic range for emotional cues. The best stuff is the quiet acoustic guitar work. These notes have wonderful attack and clarity. Those musical moments keep this audio presentation from being merely a mediocre effort. Don’t look for the subs to say too much here. Again, this is a simple presentation, very much as it should be.

McFarland Reflections: (8:29) Kevin Costner sits with the real McFarland team and coach. They offer their own insights into their story and what it has meant for the community itself.

McFarland, USA is a Disney film, which means it is a family film, but doesn’t, in this case, mean it is dumbed down. It is a fairly hard-hitting look at poor families doing what many poor families in this country have always done, finding a better way of life.