Beyond the Reach (Blu-ray) 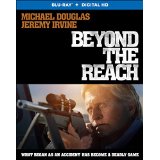 I’m hard pressed to think of a movie star who is better at playing rich a-holes than Michael Douglas. He’s played a Murderous Rich A-Hole, a Rich A-Hole Who Gets Put In His Place, and a Self-Destructive Rich A-Hole, to name just a few. And that’s not even counting his Oscar-winning turn as Gordon “Greed is Good” Gekko, the Definitive Rich A-Hole. It’s tempting to tidily sum up Beyond the Reach as “Gekko’s Got a Gun.” Unfortunately, what starts out as a picturesque two-hander becomes more preposterous as it goes along before completely flying off the rails in the final act.

The larger-than-life corporate shark Douglas plays this time around is named John Madec. He hires a young, talented, brokenhearted guide named Ben (Jeremy Irvine) for a hunting expedition in the Mojave Desert. Director Jean-Baptiste Leonetti and screenwriter Stephen Susco let us know Madec is a jackass before we even lay eyes on him; as Ben walks into the local sheriff’s office to meet Madec, we see his monstrous Mercedes truck taking up three parking spaces outside.

Madec and Ben — polar opposites in terms of temperament and social status — clash immediately, but press on nonetheless. During their excursion, Madec accidentally kills…something he wasn’t supposed to. Instead of taking his chances with the authorities, Madec uses a toxic cocktail of blackmail and bribery to keep Ben quiet. When that plan doesn’t work out, Ben has to dodge Madec and the desert’s harsh, unforgiving conditions to stay alive.

Beyond the Reach is based on a 1972 young adult novel called “Deathwatch” by Robb White. (Why am I not surprised that even YA novels were more hardcore in the ’70s?) The story was previously turned into a 1974 TV movie starring Andy Griffith(!!) as Madec. It’s a better-than-average candidate for the remake treatment, given the timeless nature and bare-bones structure of the story. (The most modern thing in this movie is Madec’s truck; more on that in the Special Features section.) The best parts of Beyond the Reach are the stylistic shout-outs to the Westerns of Sam Peckinpah, especially when the film alternates between panoramic, breathtaking vistas and claustrophobic close-ups of the two actors’ faces.

The two lead roles are actually quite well suited to each of these actors’ strengths. Douglas once again makes for a charming enough jerk; Madec randomly uses a Wall-E impersonation to make sulky Ben break a smile. It’s entertaining watching him chew the scenery, even if I didn’t totally buy Madec’s leap from “spoiled rich hunter” to “sadistic murderer.” And after a physically torturous turn in The Railway Man, Irvine is once again asked to suffer extravagantly on-screen. The problem is the script ultimately lets each of them down.

Ben is supposed to be the terse and principled counterpoint to Madec’s off-putting brashness, but the character is so underwritten that it’s hard to understand and invest in the decisions he makes following the fatal hunting accident. There’s also the relationship between Ben and his college-bound girlfriend (Hanna Mangan Lawrence), which isn’t developed nearly enough when you consider how significant it ends up being.

And then there’s that final act. I didn’t mind that Beyond the Reach threw in Chekhov’s gun along with Madec’s high-powered rifle, but the final 15 or so minutes of this movie are so stupefyingly contrived and illogical that it ruined any goodwill the movie might have engendered up to that point. (Including overlooking some of the contrived and illogical stuff that goes down before that disastrous finale.)

Beyond the Reach is presented in an aspect ratio of 2.40:1. The 1080p image is arrived at with an AVC MPEG-4 codec at an average of 18 mbps. This Lionsgate Blu-ray release absolutely had to present this film in the widest possible aspect ratio for the small screen since the stunning landscapes are easily the best thing about Beyond the Reach. The wide, panoramic shots of the otherworldly New Mexico landscape offer extraordinary detail, as do the close-ups on Douglas and Irvine. Flesh tones are warm, and the color palette is arid and sandy; the most notable source of color is the painful-looking shade of eggplant that Ben’s skin takes on after spending too much time in the sun. The only minor blip is some aliasing and noise during some darker scenes. (Particularly the sequence where Madec flings sticks of dynamites at Ben like he’s trying to kill the Road Runner.)

The DTS-HD Master Audio 5.1 track is lively and only a half-step behind the terrific visual presentation. Immersion largely comes courtesy of the whooshing desert wind. There is some good directionality on display whenever Madec fires his rifle and the shots ring out from the front speakers to the rest of the sound field. Subs get a workout during the aforementioned dynamite fight and whenever Madec’s massive Mercedes roars to life. For a movie with only two main characters and extended dialogue-free stretches, the track does a nice job of enhancing the viewing experience.

Audio Commentary with actor/producer Michael Douglas, producer Robert Mitas, and director Jean-Baptiste Leonetti: There’s a bit of Captain Obviousness to this track — somebody actually says, “And this is you” to Douglas when Douglas pops up on screen — but there are also some fun facts to be gleaned. I especially liked hearing about the ways the location scouting process influenced the script. (An old oil pump and some busted TVs inspired the Wall-E ad-lib and Madec’s first rifle shots in the movie, respectively.) Douglas departs about halfway through the track, and the filmmakers go on to talk about different versions of the ending, which they admit to pumping up to include a final scare that wasn’t in the book. (Horrible idea.)

The Making of Beyond the Reach: (12:02) Examines the arduous process of filming on Navajo land in New Mexico and breaks down challenge of creating tension with two characters alone in the desert. This is a pretty standard “Making Of” featurette that probably explores the story’s themes — young innocence vs. corrupt older generation — more than the actual movie did.

Six Wheeling — Inside and Outside the Ulimate Ride: (10:27) An informative look at the movie’s third lead: the Mercedes G63 6×6 truck Douglas’s character drives. This is actually a pretty entertaining deep dive of the awesome, absurd vehicle and its many amenities. (In the book, the duo takes Ben’s raggedy Jeep into the desert.)

Beyond the Reach has a promising premise for minimalist thrills, but the movie is ultimately undone by sloppy storytelling and a dreadfully dumb ending. The Blu-ray, at least, offers a fantastic A/V presentation. I can’t recommend you run out and rent this one; but if you do, you’ll be well-served to turn it off about 15 minutes before the end.