Posted in: Disc Reviews by Gino Sassani on July 6th, 2015 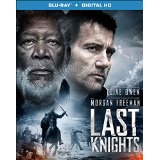 “During the long, dark period of the Great Wars, an elite class of soldier rose from battle. Their unbreakable code was simple: possess a noble heart of courage, right conduct, and absolute devotion to one’s master. From out of those years of bloodshed an empire would emerge. Its power would assimilate persons of every color, creed, and faith. This uncontested rule eroded the traditions of the great knights… but not for all.”

Last Knights is an ambitious direct-to-video production. It sports a rather elite class of actors headed by Morgan Freeman, who adds a ton of gravitas to any role he plays. The sets and computer-generated extensions provide the film a rather stirring environment in which to tell an epic tale that owes more than a little to the classic Ronin 47 story. The snow-driven locations in the Czech Republic provide that final sweet element that takes this film far above the usual kinds of films we find in the direct-to-video market.

“Honor is something that all men are born with. It cannot be taken from you, nor can it be granted. It must only be not lost.”

I love that quote. It might have become my favorite film quote of all time. I can picture the words coming from my own grandfather. It’s a classic idea and a classic story told many times and in many ways. Lord Bartok (Freeman) has been a loyal nobleman to the empire for years. His family has held the position for nine generations. His loyal resident and general is Raiden (Owen). He is one of the few remaining adherers to the ancient code. He would do anything Bartok commanded him to do. But now the Emperor’s Minister Geeza Mott (Hennie) is demanding ever-increasing bribes from the noblemen, which in turn requires them to tax those living on their lands. After 30 years of corruption, Bartok decides to make a stand. He is summoned to the capital where he deliberately insults the Minister with a cheap gift and ends up in a Mexican standoff with swords at many throats. Bartok’s is at the throat of Minister Mott.

Now he’s arrested and must appear before the Emperor (Moaadi), where he shows no remorse for his actions. Mott intervenes in the sentencing and forces Raiden to behead his master, an act Bartok demands him to obey. It is the end of Bartok’s house, and they are driven from their homes. Raiden appears to fall into a deep depression, and a year goes by with Raiden fallen into a seemingly hopeless despair.

Mott lives this year in constant fear of reprisal. It is almost a revenge in itself. He’s paranoid and wastes resources on bodyguards and iron gates to keep out his imagined assassins. His resident Ito (Ihara) is also a holder of the code. He follows Raiden for that year and reports his downward spiral to Mott. It appears to be over when Raiden sells the sword Bartok gave him for more drink. Of course, it’s not over, and the fight to redeem Bartok’s honor will come.

There are three very distinct movies here. The first act is absolutely great stuff. Freeman delivers a powerful presence, and his story is compelling throughout. There’s great chemistry between Morgan Freeman and Clive Owen as these men find their hands forced by cruel fate. It’s a quiet film, at this point rich with wonderful dialog about honor and choices. Once Freeman is gone, a lot of that grandeur goes with him.

The middle act of the film is at times painfully sluggish and slow. Director Kazuaki Kiriya allows his film to get stuck in the mud. I understand that it’s important for us to appreciate the circumstances for Raiden and his men. It’s a clever idea that ends with a rather nice twist. But he takes too long to spring his trap, and a film once compelling and exciting becomes torture and boredom. Fortunately, the film manages to rise out of the murk and become yet another movie once again.

The third act fulfills the thrilling promise of swords clashing and heroic deeds of daring-do. Once again I was awakened from my slumber-like trance and engaged in the actions on the screen. Now we have a fitting climax. Of course, there’s a bit too much computer work here, and at times it’s extremely obvious and perhaps not quite necessary. Kiriya built up such a fine first act that I wish he’d managed to find a way to keep that kind of momentum going. Perhaps we’re all more than a little jaded these days. I don’t really need to have hundreds of moving parts in my battles. It doesn’t all have to be as large as Lord Of The Rings. I think we’ve lost the ability to appreciate the closer confines and intimate encounters in battle. It certainly would have played out as a wonderful companion to what Freeman and Owens started in the first act. Sometimes less is better, particularly when you have the performers to pull it off like we have here. I guess it comes down to trust in the resources that you have there at the time.

The best decision made on this movie was the incredible mix of cultures and geography. The movie isn’t really set in a time or place that you could completely nail down. I love that mix of cultural elements that makes this story its own kind of thing amid all of the familiar elements. It was done with every aspect of the movie from the location, costume design and the cast itself. This is quite the international cast, to be sure. We have actors from America, Japan, Korea, Mexico, Iran, Canada and Britain. The crew contains just as many nations represented in the mix from Italy to Japan. It’s a perfectly brilliant combination that gives us something we haven’t quite seen before. It’s that unique atmosphere that makes this worth watching even through its muddling middle.

Last Knights is presented in its original aspect ratio of 2.40:1. The 1080p image is arrived at with an AVC MPEG-4 codec at an average 35 mbps. This high-definition image is steeped in atmosphere. The cold, snowy locations provide a cold color palette that manages to pull you directly into this story. Needless to say there is very little color, particularly in exterior scenes. It’s a frosty, drab world. The only splash of colors comes from the costumes and in interior shots. Here you get a nice taste of color and texture that provides rather good contrast to the atmosphere. The film’s a bit too glossy for my tastes. This would have been nice on film with just enough grain to provide an organic feel. It’s a really noticeable flaw, in my opinion. The CGI is, at times a bit too obvious and doesn’t always blend as seamlessly as intended. Black levels are a bit washed by the cold color temps. The best detail is in tight shots. The film utilizes mostly natural light, so the image can be dark and lose some of its sharpness.

The DTS-HD Master Audio 5.1 is not quite as impressive. One of the downsides to the international cast is the sheer amount of ADR needed. Some of it is actually quite bad, reminding me of a 70’s cheap martial arts film. The ADR also robs some of those performances of the cutting clarity and precision that you get when Freeman delivers his speech before the Emperor. It’s a pin-drop moment that’s delivered with excellent attention to the slightest detail. I’m talking the expanse of the hall and Freeman’s wonderful voice combined for some incredibly crystal moments. The score isn’t a great one and does distract from some of the action. But there is quiet in a few crucial moments. Surrounds offer a few battle moments of note. There’s not a lot of sub response here even during the explosive battle scenes.

Behind The Scenes Of Last Knights: (22:03) Cast and crew revel in the international production and both the challenges and advantages of doing a film this way. Plenty of behind-the-camera footage which focuses on the action scenes. They all talk a lot about the code depicted in the film. We could all use more of that for sure.

A Look At The Special Effects Of Last Knights: (5:04) You get a look at several scenes through the various layers of effects to final look. There’s no narration of any kind. It’s all just production footage.

Interviews With Cast And Crew: There are several, and they all run under 10 minutes. You must play them individually. Much of the footage is included in the first feature.

This was indeed a pleasant watch. There are elements of the feudal Japan films here and the various samurai films we’ve seen over the years. And, while the plot isn’t exactly original, this is a very original film when it’s all said and done. It’s one I will absolutely watch again, and likely soon. I suspect there’s enough going on that I’ll pick something up of value in the second viewing. Yeah, I might fast-forward through some of the middle. Kiriya took a familiar tune and arranged it with some exotic elements so that while it’s all somehow familiar, it’s brand new. He must have thought he had something there.  “It’s tough to argue with that logic.”

Gino Sassani is a member of the Southeastern Film Critic's Association (SEFCA). He is a film and television critic based in Tampa, Florida. He's also the Senior Editor here at Upcomingdiscs. Gino started reviewing films in the early 1990's as a segment of his local television show Focus. He's an award-winning recording artist for Omega Records. Gino is currently working on his 8th album Merchants & Mercenaries. Gino took over Upcomingdiscs Dec 1, 2008. He works out of a home theater he calls The Reel World. Favorite films: The Godfather, The Godfather Part II, The Body Snatcher (Val Lewton film with Karloff and Lugosi, not the pod people film), Unforgiven, Gladiator, The Lion King, Jaws, Son Of Frankenstein, The Good, The Bad And The Ugly, and Monsters, Inc.
Contest: Win Kill Me Three Times On Blu-ray From Magnolia Home Entertainment Contest: Win Echoes Of War On DVD From ARC Entertainment