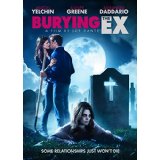 Feel like your girlfriend can be a little clingy? You’ve got nothing on Max, the slacker at the center of Burying the Ex. The movie operates in a genre — mixing broad comedy and horror — that has been largely (and sadly) missing from the big screen for the better part of two decades. That’s why I was delighted to see that the man at the helm here is none other than Joe Dante (1978’s Piranha, Gremlins 1 and 2), who has made some of the best horror comedies of all time. Burying the Ex isn’t near that level, but it’s still a fun and welcome diversion.

Max (Anton Yelchin) is a 20-something underachiever who works as a clerk in a horror-themed shop. His big goal in life is…to open up *his own* horror-themed shop! Max’s live-in girlfriend is Evelyn (Ashley Greene), a hardcore environmentalist with a type-A personality. Everyone’s in Max’s life — especially his boorish half brother Travis (Oliver Cooper) — can see Evelyn isn’t the girl for him. The only person who can’t see this is Evelyn herself, who seizes on Max’s promise that they’ll be together forever. The good news for Max is that he doesn’t have to go through the awkwardness of a breakup. The bad news is Max dodges that bullet because Evelyn is killed in a freak accident right before he can dump her. The worst news is his promise that they would be together forever was made shortly after a satanic genie arrived in the shop where Max works.

“She’s back, she’s dead, and she thinks we’re still dating.”

Initially, Max is wracked with guilt but starts to find his mojo when he connects with a gorgeous fellow horror movie nut named Olivia (Alexandra Daddario). But just as he’s ready to move on, Evelyn re-emerges — digging oneself out of a grave is hard work! — and remains obsessed with spending all of eternity with Max. Eventually it dawns on Evelyn that there’s only one surefire way for the two of them to spend the rest of their undead lives together: she has to kill Max.

None of this is taken very seriously, of course. The material veers more toward the “comedy” side of the horror-comedy scale. In the place of genuine scares, we get a few gross-out gags — there’s actually a projectile vomit-related outtake following the end credits — and a deep appreciation for horror films. Max and Olivia instantly bond over their love for the kitschy and macabre, a theme that Dante previously explored in his 1993 film Matinee. Burying the Ex also sprinkles in plenty of horror-related Easter eggs — vintage clips of Bela Lugosi and the recently-departed Christopher Lee, along with a hint of Bernard Hermann’s Psycho score and shout-outs to filmmakers like George A. Romero — for fans of the genre. There’s even room for appearances by Dante vets like Dick Miller (both Gremlins, Small Soldiers, The Hole) and Archie Hahn (Small Soldiers, Matinee, The ‘Burbs).

Given all those factors, you would think this project was specifically catered to Dante’s talents. However, Burying the Ex is actually based on a 2008 short film written and directed by Alan Trezza, who is the credited screenwriter here. The story is as predictable — if somewhat bloodier — than your traditional romantic comedy, so the movie’s comically morbid twist is a welcome tweak. The production is transparently (and charmingly) cheap; unintentionally or not, it adds to the film’s comedic value. If anything, the limited budget was more of a distraction during some of the more static or awkwardly-staged scenes.

Yelchin makes for a decent slacker hero. His relaxed performance helps cover up the fact that spineless Max is not a very good boyfriend. I realize we’re supposed to think Evelyn is a shrew, but I was delighted by Greene’s performance. The joke here is that Evelyn’s overbearing demeanor doesn’t change all that much once she is reincarnated as a zombie. Daddario makes for an affable dream girl, even if Olivia feels less like a real person than a screenwriter’s fantasy. Meanwhile, Cooper commits to the role of Obnoxious Best Friend and helps compensate for Yelchin’s more laid-back energy.

That casualness percolates throughout the rest of Burying the Ex, which won’t give anyone nightmares but is amusing enough to keep your attention throughout its 90-minute running time.

Burying the Ex is presented in an aspect ratio of 2.40:1. The 1080p image is arrived at with an AVC MPEG-4 codec at an average of 26 mbps. To be honest, this movie is no one’s idea of a visual feast. In fact, much of the presentation reminded me of a multi-cam sitcom. That being said, the Blu-ray from Image Entertainment nails the important parts of this comedic-horror presentation. Namely, the blood is super saturated and a rich red, while black levels — most notably on display during a graveyard screening of Romero’s Night of the Living Dead — are inky and feature strong separation. In fact, detail here is so good that the makeup job for Undead Evelyn doesn’t always hold up to HD scrutiny.

The DTS-HD Master Audio 5.1 track doesn’t offer a ton in the way of immersion, but makes up for it with some classic horror movie sound effects. It’s there in the “squish” when Evelyn takes a bite out of human flesh. The dramatic thunderclaps and string score by Joseph LoDuca (the Evil Dead films) also sound appropriately robust and over-the-top. Still, this is an unambitious, dialogue-heavy comedy, and all the sonic elements play well together.

The lack of special features is disappointing. Obviously, I would’ve loved to have seen/heard from Dante (this is his first feature since 2009’s The Hole), but it also might’ve been nice to check out the original short film.

Burying the Ex is a somewhat twisted take on the rom-com love triangle, even if it doesn’t really push into the scare zone. (If you’re interested in a recent, more balanced horror-comedy offering, check out Housebound.) Think of this as the slacker version of Life After Beth made by people who happily decided to steer into the horror-comedy skid rather than shying away from it.