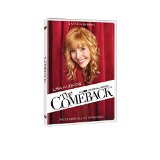 “What’s this? The Comeback comeback?”

The most unlikely program to air on HBO over the last year didn’t feature dragons or detectives…it was the story of a diva. Obviously, The Comeback — the rare HBO show that wasn’t granted a second season — isn’t as lavish as Game of Thrones or as ambitious as True Detective. But even for a network with a sterling reputation for taking chances and thinking outside the box, the return of The Comeback as an 8-episode “limited series” was somewhat of a shock.

We previously covered the show’s first season on this site, so I hope you don’t mind if I focus on the newest batch of episodes after a quick synopsis. Created by Michael Patrick King (Sex and the City) and star Lisa Kudrow, The Comeback is the story of Valerie Cherish (Kudrow), an actress who had a hit sitcom in the ’90s called “I’m It.” The action picks up in 2005 with Valerie starring in a reality show called “The Comeback,” which chronicled her return to television on a cheesy sitcom called “Room and Bored.” Throughout that first season, Valerie suffered a long list of indignities — including being cast as the dowdy, tracksuit wearing Aunt Sassy on “Room and Bored” — and frequently clashed with one of the show’s head writers, a hateful slob named Paulie G. (Lance Barber, more passive aggressive about his awfulness this time around). Season 1 concluded with the premiere of “The Comeback”, which painted Valerie as the villain of her own reality show. Of course, that made her more popular than she’d been in years.

“They’re picking you up for another season…how’s that?!”

If you think that sounds meta, wait till you hear what season 2 is about. It’s been about 10 years since “The Comeback” was unceremoniously canceled after one season. (Sound familiar?) During that time, Valerie has toiled in a series of student horror films and infomercials. As she assembles a rag tag camera crew — which includes intensely disinterested nephew Tyler (Mark L. Young) — to film and pitch a new reality show to Bravo, Valerie gets word that HBO is making a show with Paulie G. called “Seeing Red” that chronicles his heroin addiction and troubled relationship with Valerie during the making of “Room and Bored.”

Valerie storms HBO’s offices…just in time to nail an audition to play the character based on her. (Valerie Cherish has been re-imagined as “Mallory Church.”) It is, after all, the role she was born to play, and Valerie has proven willing and able to do anything to stay in the spotlight. So if you’re scoring at home: season 2 of The Comeback is about the making of a TV show based on the making of the show from season 1 that was chronicled on “The Comeback.” (Does your head hurt yet?)

All you really need to know is that Valerie is as high-maintenance and self-centered as ever. Kudrow — adopting the grand, haughty, irritating cadence of a Golden Era Hollywood starlet — is excellent (and once again Emmy-nominated) in the part. The actress pushes Valerie right against the edge of being unlikable and irredeemable; I love that there’s a stealth reading of this show that legitimately paints Valerie as the villain. However, she also shows us that the character is hard working, loyal, and eager to please (probably to a fault). Kudrow easily re-inhabits Valerie’s comedic skin, but the actress absolutely nails the season’s major dramatic moments, which include Valerie auditioning to play Mallory and Valerie sneaking a peek at her stark-looking dailies on the more dramatic “Seeing Red.”

The Comeback is hard to watch. I’m referring to both the visual presentation — except for the final 10 or so minutes of season 2, everything is seen from the vantage point of Valerie’s shaky, ever-present reality show crew — and the constant humiliation Valerie faces. Season 2’s indignities include attending the Golden Globes (but not really), having to simulate oral sex with a co-star (Seth Rogen plays the Paulie G. character in “Seeing Red”), and filming a scene in the trunk of a car filled with snakes (ok, only one of them was a live snake). If there’s an overriding arc to the season it’s the price of stardom. As Valerie inches closer to respectability (and an Emmy!), she barely has time to acknowledge that her marriage to long-suffering husband Mark (a wonderfully irritable Damian Young) is collapsing or that her closest companion/friend — flamboyant hairstylist Mickey Deane (Robert Michael Morris) — is deteriorating from his battle with cancer.

Season 2 also makes salient points about Hollywood. Ten years ago, reality shows weren’t the accepted cottage industry they are today; so I guess you could say Valerie Cherish was ahead of her time with “The Comeback.” There’s also a moment in Ep. 5/“Val is Taken Seriously” when a New York Times writer remarks to Valerie that her “Seeing Red” performance is “brave.” Valerie reads “brave” as code for looking ugly or unappealing on camera and has a mini-meltdown.

Even if The Comeback didn’t jab at Hollywood, this new batch of episodes would work purely on a fan service level. All the major players are back. That includes Laura Silverman as reality show producer Jane (now an Oscar winner), Dan Bucatinsky (Kudrow’s producing partner), who returns as intense publicist Billy. We also get extended cameos from Malin Akerman and Kellan Lutz as the “Room and Bored” cast members who went on to bigger and better things. (Just like Akerman and Lutz did in real life.) Legendary TV director James Burrows turns up briefly as “himself” again (dispensing wise words that Valerie has trouble hearing) and proves to be quite an effective actor. There are also tragicomic appearances from Robert Bagnell (as Paulie G.’s former writing partner Tom) and Bayne Gibby as stressed out “Room and Bored” staff writer Gigi.

Besides Rogen — who plays up his ultra-genial, merry prankster reputation here — new guest stars include Chelsea Handler and Sean Hayes as themselves. There’s also a parade of Bravo reality stars, including Brad Goreski, Carla Hall, Lisa Vanderpump and network honcho Andy Cohen. Each of them acquits themselves quite nicely as actor, which is no surprise given the amount of time they’ve all spent in front of cameras.

This new DVD set of The Comeback features all 21 season 1 and 2 episodes on four discs. Some of the bonus material — “Valerie Backstage at Dancing with the Stars”; commentaries from Kudrow, King, and “It Girl Valerie Cherish” — has been ported over from the previous release. The new special features are comprised of some meager deleted scenes and commentaries with Kudrow and King on the season 2 premiere and finale. It’s a relatively bare bones yet oddly appropriate release. (Feels like Valerie would hate watching herself in HD.) Here’s hoping HBO doesn’t wait another 10 years to chronicle the misadventures of Valerie Cherish.