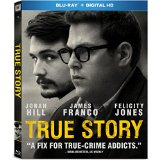 “Sometimes the truth isn’t believable. That doesn’t mean that it’s not true.”

Talk about truth being stranger than fiction! That proverb absolutely applies to the real-life story of Mike Finkel and Christian Longo, two men from seemingly disparate backgrounds who were thrust together by extraordinary circumstances. Their relationship is the basis for True Story, a drama about duality and deception. But while the truth is often stranger than fiction, that doesn’t necessarily mean it’s more entertaining.

“Everybody deserves to have their story heard.”

Finkel (Jonah Hill) was an award-winning journalist for The New York Times. When we meet him, he’s on assignment for an article on the African slave trade. Around the same time, we also meet a charming young man (James Franco) in Mexico City who introduces himself to a young woman as a New York Times writer named…Mike Finkel. I say the real Finkel “was” a journalist for the Times because he was found to have created composite characters for his African slave trade article. He was consequently fired by the Times and blackballed by the entire journalism industry. Finkel retreats to his Montana home with supportive girlfriend Jill (Felicity Jones) when he receives a strange, life-changing phone call.

A reporter (Ethan Suplee) informs him that an Oregon man named Christian Longo was arrested in Mexico. Upon his arrest, Longo — who is accused of murdering his wife and three children — claimed to be New York Times writer Mike Finkel. The real Finkel is struck by the coincidence, but also recognizes a once-in-a-lifetime professional opportunity. He reaches out to Longo in jail with the promise of conveying his story. What he finds is a thoughtful charismatic charmer who claims to be Finkel’s biggest fan. In exchange for giving Finkel exclusive access to his story, Longo asks that the journalist help him become a better writer. As the trial approaches, it becomes harder for Finkel to tell whether he can trust and believe Longo. (The very last thing Finkel needs is another shaky story.) It also becomes harder for the audience to tell which one of these men is using the other.

The movie is based on Finkel’s own account of events, which were compiled into the book “True Story: Murder, Memoir, Mea Culpa.” By all accounts, True Story largely sticks pretty close to real-life occurrences. First-time feature film director Rupert Goold — who also co-wrote the screenplay with David Kajganich — focus heavily on the similarities between Finkel and Longo, who are presented as cracked mirror images of each other.

The downside of that laser focus on the Finkel/Longo relationship is that it comes at the expense of exploring Longo’s heinous crime; the greatest amount of care and devotion shown toward the victims comes with the captivating opening shot of a dead body crammed inside a suitcase. The other casualty is Jones, a recent Oscar nominee for The Theory of Everything, who has little to do here beyond fret disapprovingly at the man she loves descending down a moral rabbit hole.

The two leads are certainly up to the challenge. There was a minor uproar when the trailer debuted and it became apparent that Hill and Franco — whose previous collaboration was decidedly sillier —were indeed headlining a drama that didn’t wink at the audience. The difference between this and something like A Deadly Adoption — the recent Lifetime movie starring Will Ferrell and Kristen Wiig that was poker faced about its absurdity — is that Hill (Moneyball) and Franco (127 Hours) are goofballs who have gotten more acclaim for their dramatic big screen work. Hill excels at playing characters (Superbad, The Wolf of Wall Street) who are all id. Here, he tones down — but still taps into — that part of himself to play the quietly narcissistic Finkel. Meanwhile, the fact that Franco can play the part of dim stoner or hyper-focused intellectual equally well helps make his version Longo appropriately tough to read. However, the actor’s off-center charisma gives you the nagging sense that you probably shouldn’t trust Longo, even when the character is probably supposed to be sympathetic.

In fact, if there are any (unintentional) laughs to be wrung out of True Story, they don’t come from Hill or Franco. I actually got a few chuckles out of some overly melodramatic notes orchestrated by Goold. (The director otherwise makes a nicely assured feature film debut.)

Ultimately, I feel True Story put too much stock in the Finkel/Longo dynamic. The duality and bond between the two characters is played up to the point where it’s even noted that they have very similar handwriting. The result is that the film seems to be building up to a plot twist or earth-shattering revelation that never comes.

True Story is presented in an aspect ratio of 1.85:1. The 1080p image is arrived at with an AVC MPEG-4 codec at an average of 33 mbps. Besides the African/Mexico City prologue — which gives the image the only noteworthy moments of warmth — the action bounces back and forth between NYC, snowy Montana, and the Pacific Northwest. The result, as you might expect, is a chilly, desaturated palette that is rendered here with impressive detail. Some of the interior jailhouse scenes between Finkel and Longo go a little soft occasionally, but these slight blips — some of which appear like they might be intentional — are minor compared to the largely impressive imagery on display. (There’s a scene between Hill and a detective played by Robert John Burke that takes place along a shoreline with a hypnotic setting sun in the background). Overall, another strong HD effort from Fox

The DTS-HD Master Audio 5.1 track is similarly strong, especially when you consider this really is a dialogue-driven drama. When Finkel is at his Montana cabin, the rears give us a subtle, firm sense of the snowstorm just outside the walls. The string-driven score by Marco Beltrami also feels weightier thanks to the breadth and clarity of this sonic presentation. Like the movie itself, some of the sound effect beats can feel a bit overwrought, but this track goes beyond what you’d usually expect from a relatively low-key drama.

Deleted Scenes: (16:44) There are five scenes, including an alternate ending, and they each include optional director’s commentary. These scenes contain the majority of Jill’s emotional arc (and help explain why Jones signed up for this movie). Meanwhile, Goold can barely hide his distaste for the action-driven alternate ending. (Goold refers to it as generic and “from a different movie.”) Features a Play All option.

Promotional Featurettes: A quartet of relatively shallow mini docs: Mike Finkel (3:33) takes a quick look at the writer’s fall from grace and stab at redemption; Who is Christian Longo (3:56) actually features more commentary from the real Finkel than the preceding featurette and expresses befuddlement at Longo’s crimes; The Truth Behind True Story (4:03) is your basic synopsis and examination of the movie’s themes; The Making of True Story (5:26) is largely redundant but does have Franco talking about Goold being chosen based on the strength of his theatrical work, and the director expressing his desire to make a doppelganger story.

Audio Commentary by Rupert Goold: For his first time at bat with one of these, Goold proves to be a helpful and engaging host. The director/co-writer talks at length about balancing the Finkel/Longo stories — would the movie be told purely from Finkel’s perspective or have a more impartial voice? — and discusses making certain cuts and decisions to maintain the film’s pacing. (We also learn Hill legitimately bruised his knuckles while performing Finkel’s final-act meltdown.) I may have been underwhelmed by the final result, but I appreciated hearing Goold’s justifications for making the choices he did.

Ironically, the thing that would’ve made True Story a more effective dramatic thriller is the same thing that got the real Finkel in hot water.

I’m not saying the movie *needed* to have an M. Night Shyamalan-style twist to make it worth anybody’s while. But the fact is some of the very best fact-based thrillers play around with real-life events to raise the dramatic stakes. Instead, the movie seemed to be as determined to stick to the facts as the post-scandal Finkel must be. It’s too bad because audiences are absolutely savvy enough to take movies that are “based on a true story” — even one that’s actually called True Story — with a grain of salt and still enjoy themselves.

Pick this up if you’re interested in seeing Hill and Franco playing somewhat against type; skip it if you’re looking for pulse-pounding true crime thrills.

Ricki and the Flash The Comeback: Seasons 1 & 2