The Killing: The Complete Fourth Season 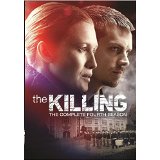 The Killing will leave behind two lasting legacies: it’s the show that wouldn’t die, and it could never quite stick the landing. The bleak crime drama drew intense criticism after failing to resolve its central mystery at the end of season 1, and was canceled by AMC after wrapping up the Rosie Larsen case in the season 2 finale. The show got a last-minute reprieve when AMC ordered a third season that I personally considered to be show’s strongest. But instead of leaving well enough alone, The Killing returned for a six-episode fourth season on Netflix.

“Everybody has a secret.”

Season 4 begins mere hours after the events of the season 3 finale, which saw homicide detective Sarah Linden (Mireille Enos) execute her lover and former partner after finding out he was the serial killer known as the Pied Piper. Her new partner, Stephen Holder (Joel Kinnaman), helps Sarah cover up the crime. The duo seems to have gotten away with their own Killing, but the stress of the secret puts a strain on their partnership. The increasingly guilt-ridden Linden constantly seems on the verge of breaking down and confessing, while Holder has a pregnant girlfriend (Jewel Staite) and even more of an incentive to keep himself out of prison. There’s also the fact that seemingly lazy colleague Carl Reddick (Gregg Henry) isn’t such a dunce after all and slowly begins unraveling their cover-up.

The show — an adaptation of the Danish series Forbrydelsen — also gives Linden and Holder a violent new homicide to solve. This one is a doozy: the well-to-do Stansbury family (father, mother, two daughters) is killed in their upscale home. The only survivor is 17-year-old son Kyle (Tyler Ross), who is also fingered as the shooter and is discovered with a self-inflicted gunshot wound in the head. Holder thinks it’s an open-and-shut case of a son flipping out and killing his family, but the bullet to the head has left Kyle with memory loss. (Or has it?) Kyle is also a student at a military academy whose headmistress, Col. Margaret Rayne (Joan Allen), is fiercely protective of her boys. She steps in as the only adult authority figure in Kyle’s life and brings him back to the academy, where he is alternately teased by cruel classmate Lincoln (Sterling Beaumon) and protected by straight-arrow student A.J. (Levi Meaden).

Season 4 mostly plays out in typical Killing fashion with Linden and Holder working their way through multiple red herrings in the Stansbury case. (Even the most casual TV viewer knows the creepy photographer neighbor we meet in the second episode probably isn’t the killer.) Of course, there’s now the added wrinkle of Linden and Holder dodging their own murder wrap while they try to catch a killer. The result is beneficial for both leads. Enos, relentlessly dour and stone-faced even when Linden wasn’t on the clock, gets more of an emotional arc to play as Linden gradually cracks under the pressure. Meanwhile, Kinnaman — whose star-making swagger during the show’s first couple of seasons briefly threatened to turn him into a movie star — gets to be the stable(r) one for a change (at least for a while) as recovering drug-addict Holder tries to live a cleaner life and keep his partner from flying off the rails.

The biggest difference, however, boils down to numbers. Whereas The Killing streeeeeeeetched the Larsen case well past its breaking point — the thing took 26(!) episodes to solve — season 4 balances two major arcs (the Linden/Holder cover-up, and the Stansbury case) in a grand total of six episodes. Creator Veena Sud, formerly a producer and writer on CBS’s Cold Case, seemed to want to break out of that procedural, crime-of-the-week mold with The Killing and really examine the 360-degree effect a brutal crime can have on a victim’s family and the cops who investigate the murder. It’s an admirable goal for sure, but also a timely one as television series continue to shift toward telling more serialized stories. Part of the problem is that Sud bit off more than she could chew — the tangled web of the Larsen case also involved the Seattle mayoral race — in a moment where TV viewers are craving shorter, close-ended stories due to the unprecedented and overwhelming number of viewing options. (Courtesy of new, original content platforms like…Netflix!)

As a result, this bite-size version of The Killing is an improvement, but the show still can’t break its worse habits. The series is consistently ponderous and preposterous. Instead of trusting viewers to pick up on themes for themselves (Linden only comes alive when she’s working homicide cases, much to the detriment of her son Jack, played by The Way Way Back‘s Liam James), we get on-the-nose writing that has Holder telling Linden that she identifies too closely with the dead. We also didn’t need to actually see Linden’s frosty relationship with her mom (guest star Frances Fisher) to understand why she’s such a bad mother herself. The biggest offender, however, is the overwrought season/series(?) finale that has multiple characters staring off into the distance and making melodramatic speeches that reveal their darkest secrets. (To be absolutely clear, the Stansbury killer *is* revealed here.) The final few minutes are also a lifeline for Linden/Holder shippers…assuming there’s people out there who’d want to see these two romantically involved.

It’s too bad because, as always, there are some strong performers here. Oscar nominee Allen excels at playing authority figures, and the show hints at a connection between Col. Rayne and Linden — they’re both strong women in male-dominated environments — that doesn’t really go anywhere. I was especially impressed with Ross’s inscrutable work; the actor’s expertly wounded performance legitimately leaves you wondering whether Kyle is suffering from head trauma…or guilt over murdering his family in cold blood. Beaumon (spectacularly douche-y as Lincoln) and Meaden (intensely militant as A.J.) make for equally effective bullies. There’s also good news for long-time Killing fans: the finale brings back Billy Campbell as Mayor Darren Richmond. The bad news is Richmond returns in a contrived, deus ex machina twist.

The Killing: The Complete Fourth Season features all six episodes on two discs. There are no special features. The more things change, the more they stay the same. Despite some strong moments in this new batch of episodes, the show once again botched the ending. The difference this time is that it looks like The Killing might actually be dead.