Bottoms Up: Rise of the Backside 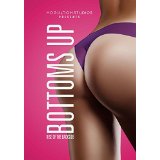 In a relatively short amount of time, Moguldom Studios has built up a diverse stable of bite-size documentaries that focus on contemporary African American life. Some would say these independent “docutainment” films are limiting themselves to a niche audience, but I appreciate them for tackling well-worn topics from a different cultural perspective. Bottoms Up: Rise of the Backside is one of two largely superficial plastic surgery docs released by the production company this week. The cheeky (ha!) title was my first clue that this wouldn’t be a totally serious examination of the subject.

Bottoms Up opens with a South Florida student named Alicia Ortiz consulting with a plastic surgeon about unnecessarily enhancing her backside. We’ll get back to Alicia in a bit, but the bulk of the documentary is a mixture of seminal hip-hop music video clips that contributed to the Rise of the Backside (Sir Mix-a-Lot’s “Baby Got Back”, Juvenile’s “Back That Ass Up”, Major Lazer’s “Bubble Butt”) and jokey commentary from people like 2 Live Crew member Luther Campbell and comedian Solo Jones.

The healthy amount of screen time Jones gets is indicative of this documentary’s more outwardly comedic tone. The goofy, lascivious approach isn’t shocking when you take the subject matter into account. (It’s a documentary about butts!)

In between the one-liners (“In 2070, everyone will have a booty like J. Lo”) and music video clips (naturally we get stills of Jennifer Lopez on the red carpet and shots of her days as a Fly Girl on In Living Color), the movie does take a bit of time to note that the twerking fad that swept the country a few years back was almost certainly appropriated from the movements of female African dancers. There’s more than a trace of bitterness from some of the commentators — in addition to Campbell and Jones, we get a roster of stylists and magazine staffers — about the fact that it took Miley Cyrus’s performance at the VMAs for something that had been an embedded part of African culture for a very long time to go mainstream.

But those moments of pure insight are few and far between. In the midst of all the juvenile jokes, we return to the case of Alicia, who decides to go through with the butt implants. We are subsequently shown cringe-inducing footage of both the procedure and its immediate aftermath. (Alicia’s entire backside is a sickening shade of purple, making it virtually impossible for her to sit comfortably.) I don’t consider myself to be particularly squeamish, but these images clashed jarringly with the lighthearted proceedings we’d been shown up to this point. It doesn’t even play as an effective slap in the face/wake up call — Alicia winds up being thrilled with her new assets — so it mostly comes off as off-putting, ineffective storytelling.

Whereas Knifed Up — the other work of plastic surgery “docutainment” released by Moguldom Studios this week — falters because it tried to cover too much ground in 45 minutes, Bottoms Up struggles mightily to fill the exact same scant amount of screen time. On top of that, the final act swerve into seriousness is likely to knock you on your backside.

NCIS: Season 12 (Blu-ray) Knifed Up: The Evolution of Cosmetic Surgery