Posted in: Disc Reviews by Gino Sassani on August 19th, 2015 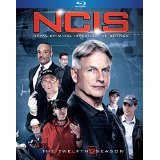 CBS has finally decided to release the number-one-rated show in the world on high-definition Blu-ray. It’s a milestone event for the network and for fans of the show, and it only took 12 years to get it done. To be fair, Blu-ray hasn’t quite been around for 12 years, but many networks have gotten us caught up with popular shows in high definition by this time. It’s remarkable that it did take this long to get a season of NCIS on Blu-ray. Let’s hope the numbers warrant that future seasons be given the same treatment and that we’ll then be able to get the previous 11. It’s an experiment CBS has tried with both CSI and NCIS: LA. Unfortunately, numbers must not have supported that move. But if ever a series deserved to live a long life in high definition, this is the one.

Special Agent Gibbs (Harmon) heads up this group of criminal investigators. Harmon has always been good, but I dare you to find a character he’s played better. He just eats up the part. You won’t have any trouble believing that Gibbs is the seasoned veteran investigator leading this team. Special Agent DiNozzo (Weatherly) is a former Baltimore homicide detective who often lets his determination run his investigation into trouble. He’ll bend a rule or throw a punch, whatever it takes to bring down the bad guy. Pauley Perrette plays the goth chick/forensic specialist Abby Sciuto. She reminds me a ton of the Penelope Garcia character from Criminal Minds. She’s flirty, far too informal for Gibbs, but is a lot smarter and tougher than she appears. Making himself more visible in this series is David McCallum as pathologist Ducky Millard. Ducky is the Quincy of the group as he checks out the bodies. His dry wit makes him my favorite character on the show. Sean Murray plays Tim McGee, who we’ve seen go from a young man with little self-confidence to a strong agent in the field. That doesn’t mean he still doesn’t suffer the barbs of Tony’s sarcasm. Last season we were introduced to Emily Wickersham as Agent Ellie Bishop. She comes with a little history. She had applied for the job years ago, and something about her stayed with Gibbs. She’s not a copy of Ziva by any means. She’s a fresh face who also brings a lot of odd quirks. She loves to sit on the floor or often on desks or tabletops. She’s a bit bouncy and likely will bond well with Abby. She rubs the old-school guys the wrong way a little at first, but they quickly respect her unique perspective. She’s a good fit, and I don’t think it will take long for you to warm up to her. She’s settled in and already feels like a part of the team dynamic.

How does a series go for 12 years and still find ways to keep the show interesting? NCIS appears to have found the secret. Not only has the show survived, it has thrived. It has often been the # 1 drama on network television, but that has only expanded in its 12th year. This last television season found the series recognized as the # 1 show of any kind in the world. On top of that, it doesn’t appear to be losing any ground. Year 12 is one of the best to date, and the show just keeps on getting better with age.

One of the reasons for this is the writing and the cast. There appears to be a symbiotic relationship here that is unlike anything else you’re likely to encounter on television. Everyone here appears to genuinely like everyone else. I’m not talking about the love-fest stuff you always get in interviews or release bonus features. There’s a bounciness that pervades the show both on and off the screen. The writers appear to flourish with that kind of energy and find ways to reveal character elements that are new each season, and over 12 years that can’t be easy. The truth is, however, that these guys make it look deceptively easy. Each character gets their time to shine, and this season has given us numerous highlights for each, allowing us to see something in them that we haven’t seen before.

For Gibbs it’s the huge story arc of the season. For the first time he’s been given an arch-villain of sorts. That character is Sergei Mishnev, played by Alex Veadov. He’s targeted Gibbs and takes away someone very close to him this season. The loss also brings about a new dynamic between Gibbs and FBI Agent Fornell, played by one of my favorite Hill Street Blues stars, Joe Spanos. We also get to meet the last of Gibbs’ ex-wives to come to the show. His # 2 arrives in the form of Rebecca Gibbs, played by good old 7 of 9, Jeri Ryan. She’ll be a replacement for the character of Diane, who will be leaving the show this season. Diane always brought us some light moments, and I suspect that’s just what Rebecca was there for as well.

Ducky gets the best episode of the season and perhaps of the entire 12 years to date. We get a flashback episode called So It Goes. When a case has Ducky and Bishop traveling to England, it brings back memories for Ducky of his life there in the 1960’s. Here’s where things get totally cool. The episode turns out to be a wonderful tribute to McCallum’s time in The Man From U.N.C.L.E. The young Ducky is played by Adam Campbell, and he looks remarkably like a young David McCallum. They dress him very much as his U.N.C.L.E. character, with the same mop-top hair, right down to his mannerisms and environments that include a friend who looks like a young Robert Vaughn. I’ve seen the new U.N.C.L.E. film, and this is far more a tribute to that series than the movie could ever be. Fans of that show must see this episode if you see no other NCIS episode in your life. But I suspect you’ll want more. I’m hoping the popularity of this episode causes them to return to this era. Maybe there’s a spinoff in here somewhere. You’ll absolutely love it.

McGee gets a special episode for a holiday treat. House Rules is a tribute to Gibbs’s various rules and a chance for the character of McGee to shine. Hackers bring down the internet in DC, and McGee is the perfect team member to remain and deal with it while everyone else goes home for the holiday. The entire episode is told from a letter he writes to his ailing father to explain why he’s stuck here. McGee gets to kind of play Gibbs here a bit and show his leadership skills. It shows what a long way he’s come from his first episodes.

Abby gets a new love in Park Ranger Bert, who shares a name with her stuffed animal. He’s running into the expiration of Abby’s two- month rule, and the team try to talk her into giving the guy at least an extension. It’s another nice look into Abby’s quirky life, but also a look at her more serious side without being too…serious.

Some of the best stuff for DiNozzo is his scenes with Robert Wagner as his father. He’s living with Tony now, and there are some great moments between these two. Wagner manages to bring out a wonderful range from Weatherly that’s got to be candy for the fans. Tony is finally getting over Ziva and has a new love interest this season.

Jimmy has a daughter that he names after Ducky’s mother. We meet Bishop’s husband Jake, and he’s played by Jamie Bamber ,who we’ve talked to here at Upcomingdiscs not too long ago. You can check out that interview Here.

And let’s not ignore the production folks who keep the production values high. We start out with an explosive episode that finds many of our team in a helicopter that’s shot down. These are not the kinds of episodes you usually get in a procedural network television show. Then again, NCIS is not your usual television procedural.

Each episode is presented in its original broadcast aspect ratio of 1.78:1. The 1080p image is arrived at with an AVC MPEG-4 codec. Finally a high definition image presentation for NCIS. It was worth the wait. This show sports pretty good production values that rival cable shows that spend a lot more money on a lot fewer episodes per year. Colors are vibrant and lifelike. Black levels are quite deep, offering excellent shadow definition. They don’t load too many episodes per disc, so the sharpness isn’t muted by compression issues.

The DTS-HD Master Audio 5.1 is pretty much there to serve the dialog. You get that extra pop that wasn’t on the DVD’s. That means mostly deeper sub response when called for. It means more dynamic range to the score and more depth to the overall audio presentation.

Pre-Flight Jitters – Filming On Location: (9:54) This is mostly an introduction to Bamber as Jake. We also go on location where the episode was filmed at an actual airport terminal.

Bad To The Bone: (11:18) The focus here is on the new bad guy and the cat-and-mouse he plays with Gibbs this season. It’s a departure from what’s been done in the past, to be sure. But it works.

Rocky Carroll – Director: (6:45) The actor finally got the chance to direct an episode, and this takes us behind the scenes. Of course, there’s the expected love-fest.

Inside Season 12: (24:54) This is the traditional season highlight reel. Cast and crew talk about the milestone episodes and reveal some of the big stories from season 12.

Table For Ten: (30:19) I look forward to this feature every year. The cast gather at a dinner table and answer questions from the fans. This is always a wonderful look at the way the cast interact in a casual setting and one of my favorite features each year.

There is a bonus DVD if you get the title at Best Buy. It includes another 40 minutes of bonus material.

It’s this kind of character development that keeps shows interesting over long periods of time. It takes that relationship between actor and director to keep things evolving. None of these characters are where we found them, and yet they’ve retained the charm that made them interesting in the first place. The show is approaching 300 episodes, a mark it will pass in its 13th season. I don’t see this ending anytime soon. When it comes to NCIS, “you never really move on”.

Gino Sassani is a member of the Southeastern Film Critic's Association (SEFCA). He is a film and television critic based in Tampa, Florida. He's also the Senior Editor here at Upcomingdiscs. Gino started reviewing films in the early 1990's as a segment of his local television show Focus. He's an award-winning recording artist for Omega Records. Gino is currently working on his 8th album Merchants & Mercenaries. Gino took over Upcomingdiscs Dec 1, 2008. He works out of a home theater he calls The Reel World. Favorite films: The Godfather, The Godfather Part II, The Body Snatcher (Val Lewton film with Karloff and Lugosi, not the pod people film), Unforgiven, Gladiator, The Lion King, Jaws, Son Of Frankenstein, The Good, The Bad And The Ugly, and Monsters, Inc.
William Castle Film Collection Bottoms Up: Rise of the Backside