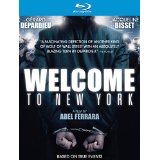 “This film was inspired by a court case, the public stages of which have been filmed, broadcast, reported and commented on throughout the media worldwide. Nonetheless, the characters portrayed in the film and all sequences depicting their private lives remain entirely fictional.”

The disclaimer that appears at the top of Welcome to New York is only the first indication that this flawed, unflinching drama — based on the Dominique Strauss-Kahn affair — seeks to blur the line between fact and fiction.

Gerard Depardieu stars as Devereaux, a prominent French financier and a presidential hopeful in his home country. Near the start of the film, a colleague alludes to rumors of Devereaux’s more unsavory predilections, and it doesn’t take long for us see them play out for ourselves. During a visit to New York, we watch Devereaux and a couple of friends — along with a couple of other (ahem) paid friends — partake in some debauchery involving champagne, milkshakes, and naked bodies. We also see that the party doesn’t stop for the insatiable Devereaux, who eventually comes face to face with a hotel maid who entered his room, thinking it was empty.

Director Abel Ferrara (Bad Lieutenant, King of New York, Ms. 45) isn’t one to shy away from potentially controversial subject matter. That’s why it was a little surprising to see the action cut away from what happened next between Devereaux and the maid. (The incident is later revisited in a couple of different ways.) Nevertheless, Devereaux is arrested and accused of rape before he could leave New York. The arrest brings Devereaux’s coolly efficient wife Simone (Jacqueline Bisset) to the Big Apple to help clean up the mess created by her scumbag husband.

The similarities to the Strauss-Kahn case are obvious, but to me they’re mostly beside the point. (Strauss-Kahn begs to differ.) The film plays out less like a chronicle of the Strauss-Kahn affair and more like a character study of any prominent, potentially sex-addicted public figure. Welcome to New York, however, bypasses the rousing revelry of something like Wolf of Wall Street.

Instead, the party sequences with Devereaux and his entourage — along with the subsequent sex scenes — are presented in a strikingly clinical way that is the opposite of sexy. That same objective, brutally unwavering eye is applied to the scenes where Devereaux is processed and placed into jail — including a humiliating strip search that showed me more of Gerard Depardieu than I wanted to see — and the sequence where Simone inspects the impossibly posh temporary home ($60,000/month!) where Devereaux eventually serves his house arrest.

Besides making Devereaux considerably less handsy in jail, Depardieu’s performance doesn’t change that much once the character falls from grace. The actor uses the same stubbornly proud saunter in jail that he does in his posh hotel, with only minor modulations to his posture. (Devereaux also saves his playful twinkle for his concierge rather than his correction officers.) It’s a performance that is impressive in its minimalism. Bisset’s Simone could’ve been a one-dimensional cold fish, but the actress doesn’t shy away from displaying the character’s emotions. (Anger, disappointment, exasperation with her husband.) The story doesn’t really delve into specifics about Devereaux (an admitted womanizer) and his past, so even the couple’s most heated arguments end up taking on a disappointingly abstract quality.

In fact, a good portion of the final act — which includes a visit between Devereaux and a therapist — devolves into immaterial psychobabble that stands in contrast with the blunt visual presentation. Welcome to New York curiously opens with some text that reveals the result of the real-life case that inspired this film; I didn’t mind knowing how the case turned out because the movie wasn’t structured as a mystery. However, that opening is followed by a quick scene where the real Depardieu talks to a handful of journalists about his reasons for accepting this role. It’s an interesting inclusion, to be sure, but it’s also the first and only-time the real-life filmmaking process intrudes on the film. So it makes me wonder why Ferrara decided to include this bit at all.

The final scene is an overwrought suggestion that Devereaux is doomed to repeat the same behavior that got him into so much hot water. It’s also the most overtly fictional creation in an intriguing movie that otherwise presents a powerful man’s self-destruction as if it were a seedy documentary.

Welcome to New York is presented in an aspect ratio of 1.85:1. The 1080p image is arrived at with an AVC MPEG-4 codec at an average of 23 mbps. Despite being set, in part, in austere boardrooms or courtrooms, the image is largely accompanied by a warm, vaguely golden tint. (The image becomes predictably chillier during Devereaux’s jail stint.) Clarity is impressive, even if the image isn’t quite razor sharp. Digital noise pops up only briefly, most notably during a police lineup scene. There’s a richness to the background and close-ups where you might otherwise find extraordinary fine detail. Black levels are terrifically deep, particularly during a dimly lit sex scene shown largely in silhouette.

The DTS-HD Master Audio 5.1 track is split pretty evenly between French and English dialogue. There’s an option that only has English subtitles pop up when characters are speaking French to go along with the all-encompassing English subtitle option for the entire film. Dialogue aside, this is a surprisingly potent presentation, most notably during a full-bodied cover of “America, the Beautiful” by Paul Hipp. Sub activity is almost non-existent, but there aren’t exactly a ton of opportunities to crank up the bass. There’s also nice separation from the front speakers (where the dialogue resides) to the rears (where we get some dynamic NYC street noises).

Remember when I said Ferrara isn’t one to shy away from controversy. Well in addition to Welcome to New York’s subject matter, that fiery streak extends to the making of the movie itself.

Apparently, the director doesn’t approve of this version — which clocks in at 108 minutes vs. Ferrara’s 125-minute cut — we’re getting courtesy of MPI Home Video/IFC Films/Wild Bunch. It may not be the version the director intended, but this cut of Welcome to New York certainly has its merits.

And those merits — a tour-de-force performance by Depardieu, and a bracingly clear-eyed first half — are considerable, despite losing a good amount of steam toward the end.