Posted in: Disc Reviews by Gino Sassani on September 14th, 2015 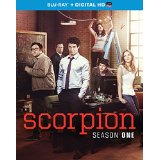 “My name is Walter O’Brien. I have the fourth highest IQ ever recorded: 197. Einstein’s was 160. When I was 11 the FBI arrested me for hacking into NASA to get their blueprints for my bedroom wall. Now I run a team of geniuses, tackling worldwide threats only we can solve…”

By now you are used to the geeky technical expert that is a requisite part of many television crime-solving teams. It’s become such a stereotype that it’s more formula than character by this point. So what if you had an entire team of these super-intellects, and there was only one normal person in the line-up. What would that look like? You don’t have to ask yourself that question any more. If you’re curious about the outcome, you might find this new procedural drama from CBS of interest.

“Toby (Thomas) is our behaviorist. Sylvester’s (Stidham) a human calculator. Happy (Wong), a mechanical prodigy. Agent Cabe Gallo’s (Patrick) our government handler. And Paige (McPhee)? Well, Paige isn’t like us. She’s normal, and she translates the world for us, while we help her understand her genius son. Together we are Scorpion.”

The quote from the show pretty much sums up the team here. This is all supposed to be based on a true story. Walter O’Brien (Gabel) is real enough. So is the Scorpion team he’s apparently assembled for the feds. In fact, Walter is one of the executive producers and writers on the show. I suppose that accounts for how arrogant and unlikable the character of Walter turns out on the screen. It’s a bad idea to write hero drama for oneself. Just look at anything written by William Shatner. It’s a huge weak link in the series and acts as too big of a distraction to truly appreciate the things that are being done here.

There’s nothing likable about Walter at all. It gets boring hearing him spout his 197 IQ several times every episode. We get it, but I suspect the real Walter just doesn’t want to let us forget it. There must be a rule as to how much screen time is allowed to pass before it’s obligated that he remind us of his IQ. This is the kind of guy who walks into a psychiatrist’s office and his first remark is that he could have gotten into their college when he was seven. Walter is the kind of guy who must assert his being better than you at every turn. I suspect the real Walter is much the same. It’s fine from a character standpoint, but it just gets old, particularly when you’re binge-watching the show. The hardest part to believe here is that anyone would be this loyal to him. It’s also hard to take when he pronounces nuclear as nucular. It’s something this character would not only avoid but would ride someone else for doing it. He’s also so smart he can’t tell a corn snake or Texas rat snake from a deadly adder. So it’s kind of that his arrogance hasn’t even been earned. I can’t imagine spending seven or eight seasons with this guy. I give him three at best.

There are likable characters here. The real surprise performance comes from Katharine McPhee as Paige. McPhee came out of the American Idol talent search, and one would have expected her to choose a singing career. I’m not that familiar with her singing voice, but she is actually a pretty fine actress. She has a lot of weight on her shoulders here and manages to steal every scene she appears in. She does better than hold her own. I think what I like most about her is how natural her performance seems. I never get the feeling she’s acting. There’s a warmth about the actress that really carries over into the role. Her son Ralph, played by Riley B. Smith, is also a breath of fresh air. For some reason he idolizes Walter and puts himself at risk to help him. The show doesn’t totally avoid the Wesley Crusher syndrome here, with Ralph saving the day a couple of times. I guess he’s just cuter, and the mother/son relationship here adds desperately-needed heart to the series.

Most of the other performers are also relatively solid but are not given as much good stuff to do. I like the show most when it tries to dig deeper into a character, but the writers just don’t let us do that often enough to satisfy. Instead these characters get too rigidly defined and end up more than a little robotic in their performances. I suspect some of that is intentional, but smart doesn’t have to mean cold and calculated.

Toby is the psychiatrist or behavior scientist. He also has an addictive nature, particularly when it comes to gambling. Walter managed to save him from some loan sharks who wanted to kill him. Sylvester is the numbers guy who is also pretty much afraid of everything. He has to find some courage when his job requires him to be out in the field. He also has a crush on Walter’s sister, who is dying of MS. Happy is the short girl in the group, but she’s actually the one most likely to kick your butt. She’s cynical and not very good at positive emotions. Toby is trying to date her, but I’m not sure how that’s going to ever work out.

Of course, there’s Robert Patrick, and he manages to survive on his strong screen presence. He’s got that commanding kind of persona that works extra-well here. I haven’t been disappointed in the actor yet. I only wish he had better material to work with here. Cabe has history with Walter when he was 11. He got him to help with government projects. They had a falling out when Walter thought he was doing calculations to deliver supplies to refugees, but he was in reality working out a bombing pattern that killed 2000 civilians. He’s a bit wary of being used by the government again but builds up a little trust with Cabe that gets threatened severely by the end of the season.

The cases get to be a little hard to take. The team always seems to overthink the solutions. The result is somewhat Rube-Goldberg solutions that left me scratching my head. A great example is a kid trapped in a sinkhole at the shoreline. The hole is filling up with water faster than they can rescue him. They can actually swim down and get stuff to him. There’s also a huge PVC pipe to allow access. So instead of simply running a long snorkel line to feed him air, they get a dialysis machine. Hook it up to his blood vessels and recirculate his blood to keep getting him oxygen while under water. Forget the danger of infection and the stuff that does go wrong; it’s so ridiculously over-complex that it all plays out more silly than serious.

The show does excel at some of its stunts and action sequences. Production values are indeed high, and the show looks pretty good. But is all of that enough to make up for the numerous character flaws and plot over-reaches? Not really.

Each episode is presented in its original broadcast aspect ratio of 1.78:1. The 1080p image is arrived at with an AVC MPEG-4 codec. I’ve already mentioned the high production values. It all comes through quite well in this high-definition image presentation. Colors pop, and some of the vistas are extraordinary. Black levels are solid and inky. The image excels at detail in this razor-sharp image. CBS is smart enough to limit the number of episodes per disc. That’s the right way to do it, for sure.

The DTS-HD Master Audio 5.1 is mostly there to serve the dialog. There are some nice explosive moments that allow your sub to wake up. Surrounds are used for atmosphere, and the result is a very natural audio presentation.

Building Team Scorpion: (14:28) Audition footage highlights this feature on the characters and the relationships on the show. Cast and crew offer their experiences getting the gig and working on the show.

Chasing The Plane: (5:16) Behind the scenes footage of the big plane action in the pilot.

When Hetty Met Scorpion: (2:02) A look at the Hetty crossover.

Living On The Edge: (2:18) A look at the season finale’s crane rescue featuring Robert Patrick doing some of the stunt work.

Inside The Brain With Eddie Kaye Thomas: An interactive collection of short features tied to areas of the brain.

The pressure is always on to make bigger and more complicated solutions, and that’s going to backfire soon enough. At times this show is like the anti-McGyver who shows off true genius by being able to make simple solutions work for complicated problems. The opposite is going on here, and it can only work for so long. That’s the problem with Rube Goldberg devices. They are too top-heavy and will eventual collapse from their own weight. Smart people should take note. You have “a lot more to offer than just fixing routers”.

Gino Sassani is a member of the Southeastern Film Critic's Association (SEFCA). He is a film and television critic based in Tampa, Florida. He's also the Senior Editor here at Upcomingdiscs. Gino started reviewing films in the early 1990's as a segment of his local television show Focus. He's an award-winning recording artist for Omega Records. Gino is currently working on his 8th album Merchants & Mercenaries. Gino took over Upcomingdiscs Dec 1, 2008. He works out of a home theater he calls The Reel World. Favorite films: The Godfather, The Godfather Part II, The Body Snatcher (Val Lewton film with Karloff and Lugosi, not the pod people film), Unforgiven, Gladiator, The Lion King, Jaws, Son Of Frankenstein, The Good, The Bad And The Ugly, and Monsters, Inc.
Nightingale (Blu-ray) Tuesday Round Up: September 15, 2015