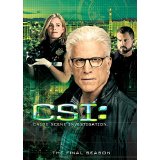 That sound you hear blaring out of UpcomingDiscs headquarters this week is probably The Who. We’ll be saying B-Y-E to CSI, as The Final Season of the long-running procedural crime drama arrives courtesy of CBS/Paramount, which also delivers CSI: Cyber — Season 1. If you listen closely, you might also catch a little Electric Light Orchestra as Universal Music Group offers up ELO: Live in Hyde Park. HBO dives into the disturbed psyches of Nightingale and The Jinx: The Life and Deaths of Robert Durst. Shout! Factory passes down The Legacy and The Bold Ones: The Protectors — The Complete Series.

Disney swings by with Monkey Kingdom, MPI Home Video rockets Closer to the Moon and cops to The Seven Five, while A&E Home Video revisits The Returned: Season 1. Warner Bros. geeks out with The Big Bang Theory: Season 8, and you can already check out our take on Peanuts: The EMMY Honored Collection.

And I reckon you guys don’t like free stuff as much as I figured you did. Remember that once a month we’re going to give away a free DVD title from among the comments in our weekly Round-Up posts. All you have to do is comment on a Round-Up post — like this one! — and tell us which of these titles you’re most excited to watch or read about. The winners and their prizes will be announced the first week of every month right here in our Tuesday Round-Up post. You can’t win if you don’t comment.