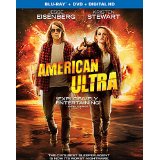 “Why are people trying to stab you?”

People in action movies aren’t usually inclined to stop and ask that question out loud. In American Ultra, a small army of CIA operatives repeatedly try to stab, shoot, gas, and blow up an underachieving slacker and his girlfriend. Seems like a lot of trouble for a panic attack-prone convenience store clerk who sketches a goofy graphic novel about an adventurous ape on his downtime. American Ultra is funny, violent, and tonally-jarring at times. However, it’s also a fun subversion of the action genre and (more specifically) “supersoldier” movies.

“Where did it all begin?”

American Ultra actually starts with a battered and bruised young man chained up in an interrogation room. We get flashes of items (a frying pan, a dust pan) whose importance will be revealed over the film’s 96-minute running time. The young man is Mike Howell (Jesse Eisenberg), an anxiety-ridden stoner who seems unwilling (and unable) to leave the sleepy town of Liman, West Virginia. Mike is convinced that his patient, long-suffering girlfriend Phoebe (Kristen Stewart) is too good for him, especially after his plans to propose to her during a Hawaiian vacation end in humiliation. What Mike doesn’t know is that there’s a very good reason he’s not able to leave Liman.

Turns out Mike is the only remaining asset in a scrapped supersoldier program shepherded by CIA agent Victoria Lasseter (Connie Britton). When Lasseter learns her arrogant colleague Yates (Topher Grace) plans to eliminate Mike to make room for his own “Tough Guy” program, she travels to Liman to “activate” Mike. Soon after, Mike becomes an accidental, unwitting killing machine.

There’s quite a bit to like here, starting with the casting of Eisenberg as an action hero. The actor — known mostly for his nebbishy screen persona — raised a few eyebrows when he was cast as Lex Luthor, but that choice made sense to anyone who saw his witheringly intellectual performance as Mark Zuckerberg in The Social Network. However, watching Eisenberg’s slight, tentative Mike straight-up kill someone with a spoon is an even bigger (and totally amusing) departure. His rapid-fire stammering is also used to great effect as one-step-behind Mike struggles to cope with what’s going on. Eisenberg also has an ideal screen partner in Stewart. (The duo previously starred together in Adventureland.) The Twilight actress usually projects a dour aura that can be tough to pair. That same straightforward toughness — which can be off-putting in different roles — helps ground American Ultra’s outrageousness, and her warm, no-nonsense attitude serves to balance all of Eisenberg’s freak outs. Simply put, Eisenberg and Stewart just make sense together.

The movie is directed by Nima Nourizadeh, whose previous feature film credit is the out-of-control party comedy Project X. The filmmaker brings some of the same anarchic spirit to American Ultra, most notably during the climactic supermarket shootout that includes a cool single-take flourish. Before that, there are plenty of goofy and graphic kills, some of which momentarily take the viewer away from the movie’s comedic wavelength. It’s a tricky tightrope to walk, and American Ultra takes an interesting approach.

The writer is Max Landis (son of director John Landis), who previously explored what it might be like for a group of ordinary kids to get superpowers in Chronicle. American Ultra covers some of the same ground as Mike gradually discovers his lethal abilities. Landis also throws in a number of subversive little touches that anyone who loves action movies will appreciate. (Instead of suiting up for the final confrontation with a flak jacket and a cache of weapons, Mike throws on…a Hawaiian shirt.)

American Ultra also has a capable supporting cast that helps sell a lot of the silliness. Grace is in full twerp mode as his Adrian Yates throws one comically bratty hissy fit after another. Walton Goggins (The Shield, Justified) turns up as a psychotic, aptly-named contract killer named Laugher. He’s funnier than John Leguizamo, who turns up as a drug dealing, conspiracy nut job friend of Mike’s. And I was personally amused by the sight of Britton (Mrs. Coach on Friday Night Lights) gearing up to kick some butt.

I like that American Ultra includes an undercurrent of sadness toward a lead character who is a chronic underachiever for reasons he can’t really comprehend or control. The movie also doesn’t shy away from the sweetness in the bond between Mike and Phoebe. American Ultra was marketed as a Pineapple Express-style stoner comedy — Mike is a “stoned cold killer” — but the humor here is largely situational (revolving around Mike’s insane predicament), as opposed to stemming from jokes and riffs.

American Ultra is presented in an aspect ratio of 1.85:1. The 1080p image is arrived at with an AVC MPEG-4 codec at an average of 31 mbps. Most of the action takes place over the course of a single, action-packed night, so I’m happy to see that the deep black levels here offer very nice separation. One fight sequence boasts blasts of neon and blacklight, which come through brilliantly. Otherwise, this is a strong, blemish-free modern presentation — with fine detail on close-ups — that leans a bit on the gray side (except for Phoebe’s red hair), even during the daytime sequences. (Although some brief domestic moments between Mike and Phoebe offer pleasing warmth.)

The DTS:X track (a relatively new challenger to Dolby Atmos) is spectacular. (Full disclosure: my sound system doesn’t support DTS:X, so the version I reviewed was the track’s DTS-HD Master Audio 7.1 core.) Not surprisingly, there is fantastic and detailed separation here. Dialogue mostly stays up front, but Marcelo Zarvos’ kinetic score is distributed between the channels in thoughtful, interesting ways. Of course, what you really want to hear about is the action, and this track excels in every way. You’ll hear the subs stir to life during the opening scene to support the propulsive music cues. That’s a prelude to the movie’s room-shaking explosions. Each hand-to-hand combat blow carries an extra oomph behind it. There’s also terrific directionality during the movie’s firefights as the bullets zing through every available channel. The temptation is to go way over the top with this presentation, but every element here is perfectly calibrated.

Audio Commentary with director Nima Nourizadeh: Although the filmmaker offers some interesting insight into some of his visual and thematic choices, this track is a bit of a snoozefest. Nourizadeh often falls into the trap of narrating the action on screen rather than giving us anything new. You’re ok skipping this one.

Activating American Ultra: (40:22) Now we’re talking! This “Making Of” documentary is a much livelier and more effective look at the project’s genesis, including interviews with Nourizadeh and Landis. (The writer said he wanted to poke fun at the Bourne movies and was inspired to write the script by a stoned friend at a party.) The cast also pops by to talk about their characters (Eisenberg and Stewart discuss re-teaming), and we get some behind-the-scenes footage of Eisenberg going through his fight choreography.

Assassinating on a Budget: (3:25) A music video-style compilation of Mike’s unconventional killing tools, including a cup of noodles, a spoon, and a kettlebell.

American Ultra debuted late during the most recent summer season…and it completely flopped. (The movie grossed about $15 million against a relatively modest $28 million budget.) The film’s underwhelming performance — even against modest expectations — was surprising given the number of people calling for non-sequel/non-superhero options at the multiplex. (Landis, for one, did not take it well.)

Of course, just because a movie is “original” — meaning “not based on a pre-existing property” — it doesn’t mean that it’s good…or worthy of my hard-earned money. That being said, I think American Ultra *is* worth a look, especially for action junkies who don’t mind a tweak of their beloved genre.