Some Kind of Beautiful (Blu-ray) 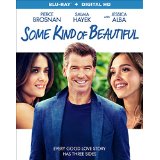 “Why are the Romantics relevant today?”

Some Kind of Beautiful shamelessly embraces every rom-com cliché in the book. The utterly nonsensical title, the main characters’ impossibly-posh digs, and the film’s exceedingly contrived and predictable plotting are probably enough to send jaded moviegoers running to the airport exit. So why am I not kicking this film to the curb? Well it helps that this particular group of attractive stars shares a relaxed, mature chemistry that carries the story through its more outlandish shenanigans.

Pierce Brosnan stars as Richard Haig, a literary professor at Cambridge who focuses on the Romantic period. Actually, the thing he really focuses on is the multitude of attractive coeds who fill his lecture hall. Some Kind of Beautiful opens with the philandering Richard delivering an “it’s not you, it’s me” speech to a surprising recipient. Richard recounts the story of how he became involved with a particularly stunning and ambitious student named Kate (Jessica Alba), who throws him for a loop by revealing that she’s pregnant right before her graduation and impending return to the United States.

Much to both of their families’ surprise — most notably Richard’s cranky misogynist dad Gordon (Malcolm McDowell), and Kate’s disapproving older half-sister Olivia (Salma Hayek) — Richard buckles down and does the responsible thing: he marries Kate and follows her and their baby to Los Angeles. Richard and Kate predictably drift apart — even though the breakup is a shock to Richard’s system — and he reverts back to his loafing, lothario ways. Eventually, Olivia hits a rough patch in her own relationship and comes to stay with Kate, which (naturally) leads to a connection with Richard. But when Richard’s precarious immigration status threatens to get him booted from the U.S. — and away from his foul-mouthed moppet son Jake (Duncan Joiner) — the reeling Romantic sets about making himself into a better man for all the people in his life…not just the women.

“How can you teach the Romantics when you can’t even have a real feeling?”

Olivia actually says the above words to Richard about halfway through Some Kind of Beautiful; it’s just one of many examples of the film’s on-the-nose writing. In fact, the look, sound, and feel of this flick — which was glossily directed by Tom Vaughan and written by Matthew Newman — sometimes make it seem like a slightly exaggerated rom-com parody. (I’m especially thinking of some of the cheesy soundtrack choices.) The tone, however, doesn’t feel self-aware at all. Instead, Some Kind of Beautiful — originally titled How to Make Love Like An Englishman presumably until someone noticed Brosnan is famously Irish — mostly takes a guileless, old-fashioned approach to romance. (Or rather “Romance,” since he likes of Lord Byron, John Keats and Samuel Taylor Coleridge are name-checked.)

To be honest, the more jarring tonal dissonance in Some Kind of Beautiful mostly occurs whenever the sillier, sitcom-y hijinks (Richard camps out in Kate’s beach house long after they’ve split; there’s a mishap involving painkillers and alcohol that you can spot a mile away) collide with the story’s unabashedly romantic moments. The transitions can be bumpy — especially when F-bombs drop in out of nowhere to jolt us from the polished proceedings — but they are largely smoothed over by a game and likable cast.

“He’s hot and funny and smart, and he’s got the suave accent.”

Brosnan is obviously well-equipped to play an incorrigible ladies’ man, even though it’s been 13 years since his last outing as James Bond. (2002’s Die Another Day.) However, down-on-his-luck Richard is actually closer to the actor’s scruffy work in The Matador. Although he’s adept at one-liners, comedy doesn’t quite come naturally to Brosnan, so you can sometimes see him straining for laughs. Overall, it’s a kick to see him loosen up and try romance on for size…without world-saving stakes. (Brosnan was also an executive producer on Some Kind of Beautiful.) The actor has pleasing chemistry with the red-hot Salma Hayek, his After the Sunset co-star who gets to act out a version of Meg Ryan’s most famous scene. The sparks are apparent right from their first scene together, when Richard and Olivia flirt at a bar before they realize their connection to Kate.

Alba easily has the most thankless role of the trio, but she’s honestly not in the movie enough to disrupt the good vibes for too long. On the other hand, Benjamin McKenzie (Gotham) is underused as Kate’s goofy, annoyingly-friendly paramour. (It feels like a chunk of his storyline is laying on someone’s cutting room floor.) McDowell is also a crass hoot as Richard’s bad dad.

One of the things I found most appealing about Some Kind of Beautiful is that it took time to explore familial bonds — between fathers and sons, and between sisters — in the midst of all the usual romantic hijinks.

Some Kind of Beautiful is presented in an aspect ratio of 2.40:1. The 1080p image is arrived at with an AVC MPEG-4 codec at an average of 33 mbps. The tone is slightly chillier — yet still lively and exceedingly appealing — during the early Cambridge scenes. Naturally, things turn warmer and brighter once the action shifts to Malibu. There is fine detail to be found here in close-ups (Richard’s perpetual stubble), medium shots, and the ridiculously gorgeous panoramic shots. (Even the hints of sepia during the story’s early flashbacks to Richard’s childhood come through effectively.) In short, the movie’s attractive stars get a fittingly attractive visual presentation here, courtesy of a fine Blu-ray release from Lionsgate.

The DTS-HD Master Audio 5.1 track is largely here to serve the dialogue, which comes through cleanly at all times. The subs pretty much get the day off here (only surfacing briefly to boost a musical selection), and the rest of the surround sound field is largely populated by Stephen Endelman’s cheery score. Background noises occasionally butt their way into the rear speakers along with the music, but this track doesn’t offer the strongest sense of immersion during scenes at Richard’s lecture hall or at the party where Richard makes a fool of himself. Not surprisingly, this isn’t the most ambitious or demanding track in the world. However, fidelity is spot-on here and the job definitely gets done.

Inside the Heart of a Romantic: (6:11) A pretty basic featurette where the cast and crew give a rundown of the story and discuss what attracted them to the project. The movie’s cliches managed to find their way here too: at one point, Alba actually talks about how Los Angeles is like a character in the film.

Some Kind of Beautiful is definitely uneven and overstuffed (Richard’s job search and immigration status keep butting in at inopportune times) and it also ends pretty much how you’d expect. That being said, I still enjoyed 00 its likable, colorful cast of characters and its focus on a grown-up group of characters who have problems and concerns that extend beyond the bedroom. (Though, to be clear, bedroom issues are still the main event here.)

Check this out if you want to see a looser version of Brosnan than usual…and you have a high tolerance for schmaltz.