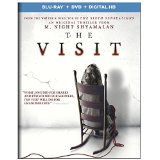 At this point, the most shocking M. Night Shyamalan-related twist would be for the director to make a movie that people actually enjoyed. (The “M.” stands for “maligned,” right?) Hopes weren’t exactly high when it was announced Shyamalan — who was once fated to become either “the next Hitchcock” or “the next Spielberg” — would be dabbling in the fading found footage genre. So imagine my surprise to find that The Visit — a broad, nutty mix of comedy and horror — is the director’s loosest, most playful effort since Signs. It’s also his first (subjectively) non-terrible flick in about a decade.

We meet a harried single Mom (Kathryn Hahn) as she prepares to send her two children on a week-long trip to meet her estranged parents. Becca (Olivia DeJonge) is a 15-year-old aspiring filmmaker who decides to document the experience of meeting her grandparents on camera; she also wants to find out the reason Mom had a falling out with them. Tyler (Ex Oxenbould) is a 13-year-old freestyle-rapping, germophobic goofball who enjoys undercutting his older sister’s self-seriousness. The pair take a train to the rural Pennsylvania town where their mother grew up and are met at the station by Nana (Deanna Dunagan) and Pop Pop (Peter McRobbie), who take the kids back to their dilapidated farmhouse.

“Bedtime here is 9:30. It’s probably best you two shouldn’t come out of your room after that.”

Once they’re at the farmhouse, Becca and Tyler set out to bond with their exceedingly genial grandparents and get to the bottom of their estrangement from their Mom. (Which might involve the well on the family property.) However, the kids start to notice some disturbingly erratic behavior. Also, why does Pop Pop keep going into the detached shed? Is mold really the reason they’re not allowed in the basement? And what are those strange noises that occur in the house at night after the kids have locked themselves in their room? Can they be explained away rationally — “They’re just old” is a recurring refrain — or is there something more sinister going on?

I won’t answer any of those questions here because a big part of the fun I had with this film involved trying to separate the material that was actually relevant to the story from the quirky flourishes. (Is it a coincidence that Becca’s camera captures not one, but two monologue-spouting wannabe actors?) It’s a particularly refreshing turn of events when you consider Shyamalan’s last two films — After Earth and The Last Airbender — were aggressively joyless. And the fact that The Visit overtly courts laughs also separates it from The Happening; it’s been seven years since the latter movie came out and I’ve come to appreciate it as a cult comedy classic, but I still have no idea if Shyamalan was being serious with that thing. (In that way, it’s the “Trapped in the Closet” of movies.)

Not all of the attempts at humor stick the landing here, but the crucial difference is that the director is in on the joke this time. (An early hide-and-seek set piece is particularly successful at mixing shrieks with laughs.) In other words, The Visit is the first time in a long time that we’re laughing with Shyamalan rather than at him.

For The Visit, Shyamalan somewhat shares the marquee with prolific producer Jason Blum, who has made a mint with micro-budgeted/highly-profitable chillers like the Paranormal Activity, Insidious, Sinister and all of their sequels. Shyamalan’s recent struggles are well-documented, but Blumhouse Productions is quietly in something of a slump. Even though their films almost universally qualify as financial successes, Paranormal Activity will wrap up next year, this summer’s Insidious: Chapter 3 was the lowest domestic grosser in the franchise, and Sinister 2 won’t come close to matching its predecessor. (And that’s without even getting into the creative rut most of those films are stuck in.) So while on some level it’s mildly depressing to see someone with Shyamalan’s gifts “stoop” to making an ultra-low budget horror flick, you could make the case that Blumhouse needed someone of his caliber just as badly.

Then again, I happen to think making a $5 million horror/comedy — which is the reported budget for The Visit — is a better fit for Shyamalan’s classical idiosyncrasy than handing him $150 million to adapt a cartoon or make a sci-fi epic with Will Smith. This is, after all, a guy who happily included cheesy short films he made as a kid on his DVD releases. Let’s not get it twisted though: Shyamalan *is* vastly overqualified to be making a found footage film. But instead of palpably slumming, the director throws himself into the form and elevates it to the extent that it can be elevated. The script, also written by Shyamalan, builds in a semi-legitimate excuse for the characters to be carrying cameras around all the time and allows for more interesting, cinematic angles than we’re accustomed to from this genre. (It also allows for multiple perspectives.)

Of course, Shyamalan hasn’t broken all of his bad habits overnight. The Visit — which clocks in at a sleek 92 minutes — feels overwritten, and I’m not just talking about the too-cute-by-half meta commentary from aspiring filmmaker Becca. Some of the subplots/potential red herrings (possible demonic visions, abandonment issues involving Becca and Tyler’s dad) do more to bog down the story than capture the imagination. And while I was amused by the running joke in which Tyler uses a female pop star’s name to avoid cursing, I have to throw a challenge flag on the notion that a 13-year-old boy even knows who Sarah McLachlan even is.

Either way, The Visit plays out with an oddball energy that kept me off-balance and engaged me the entire time. One second Shyamalan is adding a schlocky, over-the-top musical cue to his score-free soundtrack, the next moment things are getting uncomfortably confessional between Becca’s cameras and the rest of her family. A lot of the comedy comes courtesy of Oxenbould, a vibrant young comic actor. (Which is lucky for him because I don’t see much of a rap career in his future.) DeJonge is the sullen counterpoint who retains her teenage girlishness even as she spouts Shyamalan’s hyper-literate dialogue. Dunagan and McRobbie shine in what are easily the trickiest roles in the film. (Dunagan’s work is especially revelatory…in more ways than one.) The duo radiates a benign menace that allows the audience to attach their own fears and insecurities to moments like the one where Nana asks Becca to climb into the oven. Hahn also manages to be a funny, flighty presence despite the fact that she literally phones Skypes in her performance.

I haven’t been overly impressed with some of the aforementioned horror offerings from the last couple of years. I feel like many of them follow a pat formula that leads to the same conclusion. (Real talk: even though I enjoy the series, the last three Paranormal Activity movies essentially end the exact same way.) Say what you will about the ending of The Visit and its curiously sappy coda, but it’s not like anything anyone’s seen in a while. (It features the Yahtzee game from hell and one of the most gag-worthy moments involving something other than blood in recent memory.)

The Visit is presented in an aspect ratio of 1.85:1. The 1080p image is arrived at with an AVC MPEG-4 codec at an average of 34 mbps. As I mentioned before, Shyamalan does his best to elevate the found-footage genre from a visual standpoint. Whereas these films are usually characterized by shaky, intentionally low-quality images, The Visit offers a crisp (no camcorder grain to be found) and vibrant (particularly for Becca and Tyler’s clothes) presentation courtesy of this Blu-ray from Universal. The snowy Pennsylvania farmland where most of the action takes place also offers some resplendent whites. At the other end of the spectrum, black levels are inky for the scenes where Nana is sundowning and offer tremendous separation, which results in greater detail and puts the audience on edge. Overall, this is a terrific visual presentation in a genre that generally doesn’t offer very much to look at.

The DTS-HD Master Audio 5.1 track is similarly more active and dynamic than what you usually find in this sort of film. To be fair, Shyamalan and the filmmakers essentially cheat in this regard, adding atmospheric noises that wouldn’t sound nearly as good if the only source were Becca and Tyler’s cameras. (An early scene at a train station offers some particularly nice immersion.) What the film sacrifices in authenticity, it makes up for by presenting a more impactful cinematic experience. The jump scares here pack a pretty good wallop. Separation is more defined than usual. Dialogue consistently stays within the front speakers, while background noises tend to only pipe up during outdoor sequences or scenes that don’t involve Becca conducting an interview. While the track isn’t as much of a pleasant outlier as the visual presentation, it’s still a cut above the typical found-footage offering.

Alternate Ending: (2:25) This emotional scene grants Hahn’s harried Mom the “elixir” to reconnect with her estranged parents. Sorry, Tyler T. Diamond Stylus-haters: I don’t believe this scene was meant to replace the freestyle rap that takes place over the end credits.

Deleted Scenes: (8:34) There are 12 scenes total, and most of them are expendable. The exceptions include more disconcerting rambling from Pop Pop, Tyler having to overcome his germaphobia around Nana, and a glimpse at the fictional “Housekeepers of Houston” show that serves as a punchline.

The Making of The Visit: (9:56) This slickly-produced mini doc — which is much showier than the movie itself — is basically all about Shyamalan rediscovering his low-budget roots after a couple of big-budget flops. The director talks about how the “danger” had gone from his work, and describes feeling like a kid again while working on this film. (He can be seen flinching behind the scenes —along with the rest of the audience — during the movie’s most disgusting moment.) Also includes some audition footage from the largely unknown cast.

Becca’s Photos: An in-character gallery of Becca and Tyler posing with their grandparents, which becomes 10 times creepier after you’ve seen the film.

The Visit is funny (on purpose!), weird, and probably more than a little messed up. In other words, it actually has a personality. I happen to think modern horror movies could use more of those qualities, even if the personality attached to this film will prove off-putting to some. I’m gonna stop short of saying The Visit is a return to form for Shyamalan — The Sixth Sense holds up to repeat viewing even if you know the twist; Unbreakable is my personal favorite of his movies — but it’s a much-needed step in the right direction.