Bolero / Ghosts Can’t Do It 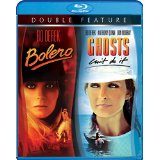 My first exposure to Bo Derek was Michael Anderson’s horror film Orca. While she may have had a minor part in the film, she had a rather unique beauty about her that was hard to ignore. After Orca, she dropped off my radar for the better part of five years, until her familiar face came to me in Shout Factory’s Bolero/Ghosts Can’t Do It combo pack. Once again I was graced with her unique beauty, but with a new understanding of her acting career: mainly how it was influenced by her relationship with her late husband John Derek. The two films in this Blu-ray set are towards the end of the pair’s collaborative projects, but I believe it is an accurate portrayal of their contribution (or lack thereof) to cinema as a whole.

For those who don’t know, the Dereks’ relationship was not something you would call conventional. She was seventeen and in high school, and he was married and in his forties. In order to maintain their relationship legally, John divorced his wife and eloped with his young lover to Germany, where they remained for three years before returning to the States to marry. While this fact might be quite disturbing to some, it is necessary to mention, because the Dereks produced their first collaborative film project while abroad for those three years. The independent production, Fantasies, was shot in Greece in 1973, with unknown Greek actors and actresses and Bo Derek (then unknown) as the lead. The film was not released until 1981 due to the controversy surrounding the film: a seventeen-year-old girl exploring her sexual fantasies involving an older man, complete with nudity. Following Fantasies, John Derek wrote and directed three more films exploiting Bo’s beauty before ending his career as a director: Tarzan, The Ape Man, Bolero, and Ghosts Can’t Do It.

This Blu-ray double feature starts with Bolero, the Dereks’ second-to-last film together. As you may have gathered from my introduction, John Derek (writer and director) stops at nothing to exploit and capitalize his young wife’s sexuality. Bo stars as Ayre “Mac” MacGillvary, a young woman who has just graduated from a British boarding school. In celebration, she invites her friend and her family’s chauffer (George Kennedy) to accompany her in traveling the world, soliciting her virginity. They travel to an undisclosed Arab country in search of a sheik (as per Mac’s initial fantasy), but they finally arrive in Spain, where Mac spends quite a bit of time seducing a young bullfighter.

Ghosts Can’t Do It, on the other hand, is a little more complex than just a young woman seeking sex. Katie (Derek) is a young woman with an older husband named Scott (Anthony Quinn). Scott has a heart attack and becomes quite depressed about his health and age, so he promptly commits suicide. Tragic though it may be, the film does not stop there. Instead, Quinn gets to linger around in the celluloid as a ghost who feels sorry for his actions, and develops the ability to speak directly to his young wife for the entire film. He then instructs her to travel the world in search of a body for him to “possess,” so that he may lay with his young wife one final time. Apparently, this is a comedy.

In terms of watchability, Bolero wins by a long shot. Although it was essentially an overlong soft-core pornography, it had a certain charm to it. While watching, I didn’t seem to mind watching. However, both this film and Ghosts each took home two of the infamous Razzies for each year they were produced: Worst Film and Worst Actress. Grant it, neither film was great by any means, but I feel as if I have spoiled myself by watching too many terrible films, because I have seen much worse. Bolero is indeed cheesy, steamy, with virtually no plot other than “let me relinquish my virginity to an exotic stranger,” but there is a clear evidence of craftsmanship when it comes to pacing, editing and cinematography. As disturbing as it sounds, John Derek knew what he wanted to do: exploit his wife through a medium that he knew how to manipulate well.

Ghosts Can’t Do It, John Derek’s last film, has more evidence of creativity to it. I really enjoyed the way he made Anthony Quinn appear ghost-like: shrouded in darkness with a distorted, ripple-like motion interrupting his images. It is simple, but I think it really worked as a visual effect. What does not work is the comedic dialog. Because Quinn is alone during his scenes as a ghost, you can tell he is just reciting his lines rather than picking up on the visual cues given by Bo Derek in her scenes. It is painfully obvious that there is absolutely no chemistry between the two actors. While this film is not as raunchy as Bolero, it really was a bummer to watch, simply because you can feel the film try so hard to be comedic, and it ultimately falls flat. On a different note, Ghosts has an interesting cameo appearance of a very young Donald Trump.

There is something eerie lingering over the plot of Ghosts Can’t Do It. An older man, whose wife is Bo Derek, haunts her in the afterlife; persuading her to kill in his name, so that he may admire her sexual beauty one last time. Perhaps, with this film, John Derek ended his career because he felt he created a fantasy he was too afraid to admit was his own. Indeed, I may be exploring an extreme possibility, but I’m sure I am not the only one who can see the correlations. Mr. John Derek left us in 1998 without making another film, so for me, my theory will always remain a possibility.