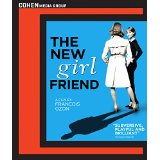 “Being a woman’s hard work.”

Femininity — the quality and essence of being a woman — is at the forefront of The New Girlfriend, a gender-bending and genre-bending offering from French director Francois Ozon. The film is a curious mix of farce, rom-com hijinks, frank sexuality, and serious drama about loss. The formula isn’t always cohesive, but it makes for an intriguing twist on the old “boy meets girl” story.

In this case, it’s actually “girl meets boy…sort of.” Claire (Anais Demoustier) receives the shock of her life after her best friend Laura (Isild Le Besco) dies. A brief flashback sequence near the beginning details Claire and Laura’s strong bond since childhood, and Claire vows to take care of Laura’s husband David (Romain Duris) and their infant daughter Lucie after Laura becomes gravely ill. But when Claire goes to check on them one day, she stumbles upon a pretty unexpected sight: David is wearing a blonde wig and some of Laura’s clothes while feeding Lucie.

– “Every child needs a mother.”

Claire understandably freaks out, but David explains that he enjoyed dressing as a woman before his marriage to Laura and the urge returned after her death. David asks Claire to keep this a secret from everyone, including her husband Gilles (Raphael Personnaz). Eventually, Claire and David’s secret bonds them together and helps them get over their depression over Laura’s death. David even dares to leave his house for the first time dressed as a woman, and he takes on an alter ego named “Virginia.” Not surprisingly, things become increasingly complicated as Claire strains to preserve David/Virginia’s secret.

In the immediate aftermath of the David/Virginia reveal, the material is played pretty (*ahem*) straight and treated with respect. The New Girlfriend makes sure to note that David had a perfectly normal childhood with supportive parents and a healthy, honest marriage with Laura. But Ozon — who also wrote the script, based on a short story from British writer Ruth Rendell — has specialized in titillating material and complex female relationships in films like Swimming Pool, Young and Beautiful, and 8 Women. So it’s not really a surprise when those preoccupations come to the forefront. (Baby Lucie is practically set aside for the majority of the film.)

The idea that Claire enables David’s “Virginia” outings because it’s a way for her to spend time with her beloved friend again bubbles beneath the surface, but Ozon pushes things over the edge by inserting a sexual element to that longing. (And it’s not the only same-sex fantasy we get in this film.) It’s a provocative direction to go and, as I mentioned, it’s certainly not surprising given Ozon’s track record. I just think it would’ve been more daring to pull back on the reins a bit and depict a more platonic love on screen that is no less intense. That being said, the sex scene that the entire movie builds up to is affecting and erotic. Ozon also makes subtler visual choices, like having Claire dress in a more masculine manner when she’s around Virginia.

It definitely helps that the two leads have pretty terrific chemistry. Duris gives a delicate performance that becomes bolder and more vibrant as David/Virginia becomes more comfortable in her skin. Demoustier carries the action extremely well and terrifically portrays Claire’s confusing swings from depression to elation and lust. Ozon thankfully doesn’t let either Claire or David off the hook; there’s a strong suggestion that each of them have their own selfish, damaging motives for maintaining their secret. I also enjoyed Personnaz underplaying Gilles’ cluelessness; he’s simply an understanding husband who is kept in the dark.

The New Girlfriend also incorporates comedy and even a Rom-Com 101 shopping montage (set to Katy Pery’s “Hot N Cold”, no less) to go along with the sex and seriousness. The mix doesn’t always work, but things particularly go off the rails during a contrived final act tragedy that threatens to blow up Claire and David’s secret but ultimately brings everyone together. It’s a wonky, melodramatic way to end what had otherwise been a refreshingly off-kilter romance.

The New Girlfriend is presented in an aspect ratio of 1.85:1. The 1080p image is arrived at with an AVC MPEG-4 codec at an average of 35 mbps. This Blu-ray immediately impresses with the film’s opening sequence, which features fantastically fine detail during close-ups of what looks like a woman prettying herself up. That detail carries over to the rest of the film, which offers good looks at Claire’s facial freckles and Virginia’s 5 o’clock shadow during medium shots as well. The image smoothly vacillates between bright and sunny (during happier times in Claire and Laura’s relationship, and a country getaway for Claire and Virginia), and gray and gloomy (Claire’s depression). Overall, this is a very pleasing visual presentation, even if it’s not the most spectacular thing anyone’s ever seen.

The DTS-HD Master Audio 5.1 track is in French with English subtitles, and there is no dubbed English track. Dialogue and many of the film’s sound effects are in the front speakers, while the rears are mostly reserved for Philippe Rombi’s score and the pop songs on the soundtrack. We also get some very subtle atmospheric sounds during outdoor scenes; the best use of background noise actually comes during a brief shower room sequence.

Romain Duris — Portrait of an “Actress”: (45:47) This is an entertaining, fly-on-the-wall “Making of” documentary that follows the film’s star as he talks about his diet and beauty regimen to become “Virginia.” Duris and co-star Demoustier seem to have a strong, chummy rapport, as we watch them constantly joking and rehearsing with each other while preparing to film key sequences. In French with English subtitles.

Deleted Scenes: (10:24) There are nine scenes total, and they include a couple of extended looks at Claire’s work life (both her struggles after Laura’s death and the way she perks up after meeting Virginia) and a few sequences that slightly expand on the theatrical cut. The scenes are presented as a single entry on the Special Features menu, but you can skip from chapter to chapter.

The New Girlfriend takes some serious subjects (gender identity and transformation) and gives them a playful, sexy twist. Although it inevitably leads to some false notes, both the filmmaker and his stars have taken care to treat the story with respect. Check this out if you’re in the mood for an unconventional take on romance and womanhood.