Posted in: Disc Reviews by Gino Sassani on January 30th, 2016 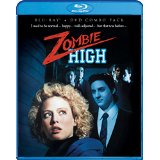 Shout Factory is churning out the 1980’s horror films to provide us with a steady diet of schlock-o-rama. Through their Scream Factory series we’ve been getting many double-header collections along with the occasional horror film that stands alone, if not standing out. The films are the kind of thing you gather a bunch of friends together and have yourself a marathon of films that make you laugh as much as make you scream. The latest in this series is the 1987 Zombie High. Of course, the film doesn’t have a single zombie, at least not in the classic Romero style, and it appears to take place at a college instead of a high school. But let’s not let plot points get in the way of a good title. In fact, Zombie High is remembered more for how it was made than for the final product.

The filmmakers literally invaded the campus of USC in L.A. In what many describe as a pretty cool con, they were able to convince the school’s staff and students that a major film was being shot there, and the crew was given a ton of cooperation from the school. USC has the oldest film school in the nation, and you might understand why everyone would be eager to help out a big film that wanted to use its locations and resources. Those resources included everything from camera equipment to providing the labor both behind and in front of the camera. The movie was made for very little money, because so much of the cost was picked up by USC in their attempt to “cooperate”. Zombie High just might be the only completely stolen film to be released to any kind of a wide audience.

USC film students joined the cast and provided most of the production crew as the movie shot during the Christmas break of 1986. Because of that brilliant coup, the movie sports higher production values than its budget would suggest. The pretty much had free rein over the campus and shot anywhere they wanted. By the time anyone caught on, the film was in the can. Recently, a film crew did much the same thing by secretly shooting at the Disney parks in Orlando without anyone knowing they were making a film. Zombie High went much further by getting the college to pitch in on the production; it would also create a bit of a guaranteed audience in the college crowd.

The plot appears as lifted… or “borrowed” as everything else on the film. If you’re looking for good old American flesh-chomping zombies, you’ll be very disappointed. Virginia Madsen stars as Andrea. She’s just received a scholarship to study at a previously all-male college. Her boyfriend Barry (Wilder) doesn’t like the idea of being separated from her, particularly at a campus where the guys outnumber the girls 10-1. His jealousy is quickly justified when Andrea is immediately attracted to the first guy she meets. He happens to be a teacher at the school. He’s Dr. Philo (Cox), and he also falls for Andrea. This is going to create complications, but not the usual teacher-student affair kind.

The school has a secret. They are performing a brain surgery on the students where they install a radio crystal in their brains. It serves two very important functions. It creates perfect students who study hard, don’t party, and love classical music. In the process a substance is extracted that is granting the faculty members a fountain of youth. It’s all about to be threatened when Dr. Philo doesn’t let Andrea fall under the procedure.

This is certainly more Stepford Wives than zombie film. Instead of robots, the students are lobotomized in order to create the perfect students. The school sends these perfect students out into society where they become prominent citizens including senators and presidents. There’s an attempt to build a creepy atmosphere, but the movie makes a huge mistake by revealing all of the plot from the start. By the time we see the “changed” students, we already know exactly what’s going on. Someone loved their idea too much and just couldn’t wait to tell the audience all about it. In doing so they wasted any opportunity that existed to leave us guessing for a while. Was it aliens, ala Invasion of the Body Snatchers? Was it demonic possession? You’ll never get a chance to guess, because the film tips its hand too early.

All we’re left with is a couple of pretty good performances. Madsen actually goes above and beyond here to carry that thrilling atmosphere, but we know much more than she does, so we don’t get to follow her on that ride of discovery. There’s no gore or extreme violence here to make up for the lack of thrills. Once we’re in on the secret, it was sadly time to change the channel.

Zombie High is presented in its original aspect ratio of 1.85:1. The 1080p image is arrived at with an AVC MPEG-4 codec at an average 35 mbps. There’s not much that could be done to make this film look good. The image displays inconsistency throughout. Colors fade in and out, and the film’s natural grain has been processed to the point that there are times it looks like bad digital noise. Black levels would more accurately be described as gray levels with almost no deep shadow definition. The print is free from scratches and other artifacts, so there was an effort to clean things up a bit. You just can’t get better than the source material.

The DTS-HD Master Mono track is actually pretty bad. I hate having to ride the remote control, but that’s exactly what you’ll have to do here. Music is mixed too loud, and just when you try and compensate, the dialog is so buried I turned on the sub titles just to be able to keep up. It’s either that or get blasted each time the music returns.

Many of the traditional 80’s horror elements are here. It’s a school, so there is the typical “cool” factor, but it doesn’t last long because of the idea of changing the students into perfect kids. The pacing is slow enough that you can’t really appreciate the solid locations and set pieces that were conned out of USC. It’s the best achievement of the film. Now if they could have made something better out of it… “Have a nice day.”

Gino Sassani is a member of the Southeastern Film Critic's Association (SEFCA). He is a film and television critic based in Tampa, Florida. He's also the Senior Editor here at Upcomingdiscs. Gino started reviewing films in the early 1990's as a segment of his local television show Focus. He's an award-winning recording artist for Omega Records. Gino is currently working on his 8th album Merchants & Mercenaries. Gino took over Upcomingdiscs Dec 1, 2008. He works out of a home theater he calls The Reel World. Favorite films: The Godfather, The Godfather Part II, The Body Snatcher (Val Lewton film with Karloff and Lugosi, not the pod people film), Unforgiven, Gladiator, The Lion King, Jaws, Son Of Frankenstein, The Good, The Bad And The Ugly, and Monsters, Inc.
Jesse Stone: Lost in Paradise Heist (Blu-ray)