Posted in: Disc Reviews by Brent Lorentson on February 4th, 2016 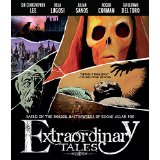 Edgar Allen Poe is on a short list of writers that has long been deceased that just about everyone has heard of.  At some point in school we all had are chance to read about the taunting of The Raven or a number of Poe’s other famous works. With Extraordinary Tales we get an animated treat in the form of 5 animated tales written by the master of the macabre.  This is more than just a simple animated retelling of the stories as each tale is given its own unique narration and animated style. Is it worth the time to sit back and watch these classic tales or did they belong on the shelf to collect dust?  Come along with me and I’ll tell you about my journey if you dare.

Whether you’re a fan of Poe or simply only vaguely recall the name from those Classical Literature courses you’re trying to forget, there is something on this release I’m sure will connect with each viewer.  Using 5 of Poe’s more popular works isn’t the only bait the film makers have decided to use to entice viewers; after all there have been numerous adaptations of his work in the past.  The appeal is that every story, though told in narration is animated with its own unique style, ranging from 50’s comic book style to oil paintings that have come alive.  The styles are so drastic from one another that in ways it’s hard to even compare the works without tipping your hat so to speak on your own artistic preference.  After all ones taste in art varies from one person to the next.  I say this because this is a piece that is hard to show objectivity without personal preferences nudging their way in.

The stories contained in the feature are as follows.

“The House of Usher”

“The Facts in the Case of Mr. Valdemar”

“The Pit and the Pendulum”

“The Masque of the Red Death”

Besides the animation giving the stories their unique look, each story has its own narrator.    Those lending their voice talents to the piece Sir Christopher Lee, Bela Lugosi, Guillermo Del Toro, Roger Corman, and Julian Sands.  The most notable one that stands out is Lugosi, after all he hasn’t been with us for some time.  The recording for his piece is from an old canned recording session he did for “The Tell Tale Heart”.  The recording shows its age but still is effective none the less and only goes on to show that these tales are timeless.

Personally my favorite is “The Facts in the Case of Mr. Valdemar”, it was the story I was least familiar with but I simply dug the old school comic style along with the narration from Julian Sands.  The piece though that struck me with its odd beauty is “The Masque of the Red Death”, the decision to do this as a painting come to life results that are far more effective than the previous entries.

There is mystery and exploration of the supernatural and in all the stories the horror of death in its many forms.  For those that are long time fans of Poe or you have a bug of curiosity this has something for everyone.

Extraordinary Tales is presented in a 1.85:1 aspect ratio.  The 1080p image is arrived at with AVC MPEG-4 codec at an average of 30 mbps.  This is a beautiful piece of work on display here. The different looks of each piece offer a refreshing experience as each story unfolds.  The images are sharp and clear throughout.  We get to see the high contrast in the blacks and whites as “The Tell Tale Heart” plays out.  From the water color beauty of “The Masque of the Red Death” to the fun old school comic look of “The Facts in the Case of Mr. Valdemar” the animation is beautifully displayed and remains true to its style.

The DTS Master Audio 5.1 track sadly isn’t on par with the beautiful visuals.  Relying heavily on the recorded narrations we only get subtle hints of the score and some ambient sound, to increase the atmospheric tales.  The Lugosi segment is the one recording that doesn’t sound polished and does come through showing its age.  I don’t mind the lack of polish on this track simply because as I mentioned before it only adds to the timelessness of the tales.

The Art of Extraordinary Tales: (5:51) Here we mainly have a collection of storyboards and some of the digital work that went into the creation of the stories.

The Making of Extraordinary Tales: (40:41) A pretty informative piece about how the project came to life as well as what went into bringing each of the stories to the screen.  The director and his producer offer plenty of insight into the many stages of the film.

While not everyone may be a fan, this is the kind of film I wish they showed us in school to further my appreciation of Edgar Allen Poe.    Whether you want to sit down and watch it in one sitting or take it one tale at a time, there is no right or wrong way to watch this, but I guarantee you will come away with a greater appreciation of Poe’s work in the end.

Brent Lorentson is a horror writer and film critic based out of Tampa, Florida. With a BA in Digital Film, he co-wrote and co-directed Scavenger Hunt. His short stories have appeared in various horror anthologies. In 2019 his short script Fertile Blood will be a part of the anthology horror film Slumber Party. He is currently working on his first novel A Dark and Secret Place set to be released in late 2019. Favorite Films: Taxi Driver, Fight Club, I Saw the Devil, The Wild Bunch, Dawn of the Dead, A Clockwork Orange, Pulp Fiction, Heathers, The Monster Squad, and High Fidelity.
Show Me a Hero (Blu-ray) Da Vinci’s Demons: Season 3 (Blu-ray)