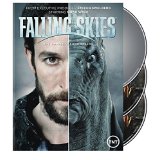 “Our final fight didn’t go as planned. But one thing was clear…this would be the bloodiest battle yet.”

TNT’s post-apocalyptic, alien invasion war drama has never been short on casualties. So hearing that the last episodes in the show’s run would result in even more losses — human and otherwise — wasn’t exactly a shock. Following a fairly ludicrous cliffhanger, the final season starts off quite promisingly before falling back on some bad habits. Unfortunately, it all culminates with a semi-disastrous series finale.

“For once, we have the upper hand.”

In case you missed it, season 4 concluded with history professor-turned-human resistance leader Tom Mason (Noah Wyle) flying an airship to the moon(!) along with his half-human/half-alien daughter Lexi (Scarlett Byrne) to destroy a crucial power core of the enemy Espheni. Lexi sacrificed herself, while Tom was thrust into deep space and presumed dead back home. However, a close encounter with a strangely familiar entity results in Tom miraculously returning to his home planet and being reunited with his 2nd Mass military regiment, which includes wife Anne (Moon Bloodgood), his three sons — Hal (Drew Roy), Ben (Connor Jessup), and Matt (Maxim Knight) — and right-hand man Col. Dan Weaver (Will Patton).

If this sounds familiar, it’s because the show’s second season also opened with Tom mysteriously returning from a trip aboard a spaceship with a foggy memory. This time, Tom comes back more certain about his mental and physical well-being. More importantly, he returns with an aggressive, provocative edict.

The invading Espheni appear to be on the ropes following the destruction of their power core, but it’s still a bit of a surprise when the cerebral Tom advocates a ruthless offensive strategy to end the war once and for all. It’s a provocative theme for the season for a number of reasons. For the vast majority of the show, humans have been severe underdogs to the Espheni, so it’s interesting to see how they decide to proceed once the tables are finally turned. It’s also tempting to question Tom’s psychological state and seeming shift in personality, especially after his unexplainable return; except that a hyper-assertive approach actually makes logical sense in this case. Falling Skies also points out that the aliens aren’t the only ones capable of inhuman acts in this conflict. (Certain people get a little kill-happy.)

The early-season highlight is Ep. 4/“Pope Breaks Bad”, which has resident scoundrel John Pope (Colin Cunningham) violently in despair after Tom decides to bring the fight to the Espheni instead of saving a loved one. It’s an entertaining storyline — continued in the action-packed Ep. 5/ “Non-Essential Personnel” — and a believable culmination of the tense Mason/Pope relationship. Unfortunately, it’s also the moment where the season starts to hit the skids.

Despite his rough, irresponsible exterior, Pope has always functioned as an important counterpoint to the more Boy Scout-y Mason. Having Pope finally snap and lose his mind may have been believable, but it also robbed the show of a valid, invaluable point of view. Even worse, it sidetracks the season’s promising start.

Falling Skies all but abandons its “find your warrior” thesis in favor of the kind of human-on-monstrous-human conflict that consistently grinds The Walking Dead to a halt. So when members of the 2nd Mass arrive at a military compound commanded by an old friend of Weaver’s (Melora Hardin), we immediately know their warm welcome won’t last. Even worse, the series finale/“Reborn” hastily thrusts the humans back in their familiar underdog role and gives the Espheni a silly, left-field reason for invading Earth in the first place. On top of that, the episode’s one meaningful death is cheapened in the end, and the action — which winds up being a stealth attack on Washington, D.C. — doesn’t deliver the epic scale the show promised. (Heck, it doesn’t even come close to some of the skirmishes from random episodes in previous seasons.)

The good news is this capable cast is game to the very end. Wyle (his voice gruffer and his face more weary than it was during his boyish breakout with ER) proved to be as capable a leader of this cast as Tom was of the 2nd Mass. Patton probably had the most satisfying arc in the series, as the militant Weaver learned to rely on others and found a family with the 2nd Mass. Cunningham was always a compelling irritant, so it was fun seeing him really cut loose in these final episodes. Unfortunately, Roy and Jessup are largely saddled with a love triangle involving Sarah Carter’s Maggie — Hal’s flame who shares an extra-terrestrial bond with Ben — that ends in a somewhat predictable way. (Despite the presence of guest star Catalina Sandino Moreno as a woman who gets Hal’s attention.)

Falling Skies: The Complete Fifth Season features all 10 episodes on three discs. Disc 3 contains all of this set’s bonus material. Most of them — “Farewell to the Skies”, “Cast Goodbyes”, and “A Look Back” — are bite-size featurettes. The exception is the 49-minute “2015 WonderCon Panel with the Cast.”

The show fitfully flirted with greatness, but it never got there. Creator Robert Rodat’s idea to re-tell the story of the American Revolution through the lens of an alien invasion story was a good one, and it allowed him to explore the many effects of war. (There’s a PTSD storyline in season 5 involving Mpho Koaho’s Anthony.) In the end, Falling Skies was a consistently entertaining action-drama that unfortunately ran out of steam in the end.