Posted in: Disc Reviews by Brent Lorentson on February 9th, 2016 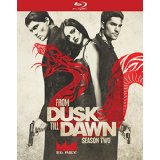 Season one of From Dusk Till Dawn gave us a ten-episode remake of the hit original movie while setting up a mythology to stretch its story over numerous seasons. Season two wastes no time in blazing its new path as it continues the blood-soaked adventure that departs from the famed Titty Twister and takes us deeper into the vampire syndicate.  How does season two fare?  After making it through the 10-episode season, I can say I survived this bloody, testosterone-laced thrill ride, but it does have a few missteps along the way.

When we first meet Richie Gecko (Zane Holtz) and Santanico (Eiza Gonzalez), they are working together with the goal of taking down all the powerful vampire clans.  The first episode is a telling glimpse of the direction Robert Rodriguez and his team plan to take the series as the episode unfolds around a heist that doesn’t go as planned.  Separated from his brother, Richie now has a chance to make a name for himself, and as the season plays out, we get to see just how ambitious he really is.

As for Seth Gecko (D.J. Cotrona), he’s fallen apart after losing his brother to the vampires and has developed a pretty bad drug habit.  Kate (Madison Davenport), who is mourning the loss of her family as well, is doing her best to take care of Seth.  Seth is trying to hold it together by taking Kate on some small-time heists, but nothing seems to be working right.

To complicate matters, the big bad for season two enters, Lord Malvado (Esai Morales), who makes a strong entrance wearing a coat made up of his victims faces.  For a character who makes such a strong entrance, I was more than a little disappointed when we see his motivation is nothing more than to get Santanico back into the club to dance and bring in customers.  The idea of ownership over people/vampires is something we see throughout this season as they briefly explore human trafficking as a form of feeding.

While the season plays on, Seth and Richie reluctantly cross paths after they learn about a big score that their Uncle Eddie (Jeff Fahey) tells them about.  Seth is in it for the money; Richie and Santanico see it as a way to hurt Malvado.  It’s when the show is focusing on the crime elements that I feel it is at its best.  Seeing them plan heists along with the double-crosses along the way is what shines here.

Where the show seems to flounder is with its mythology about a blood source that is simply waiting to be tapped quite literally like oil.  Apparently the ancient vampires buried 1000 innocent souls, and if you find this location, it’s supposed to be a powerful blood source.  This is the quest Carlos (Wilmer Valderrama) has set out to find in his attempt to dethrone Malvado from the top, since he figures whoever has the blood source has the real power.  As this storyline plays out it only goes on to seem more ridiculous then goes a step further and becomes pointless.  I kept hoping there would be some kind of payoff with this storyline, and it when it came, it was a moment that evoked the urge to throw my remote at the TV.

There is plenty of silly fun to be had with this show.  Seeing Jake Busey make his Sex Machine role his own has been fun, and this season we get to see some of his “new gifts” put into action.  Danny Trejo also makes an appearance as The Regulator, a mysterious killing machine resurrected by Malvado to go after Santanico.  We even get a new bar to take the place of the recently destroyed Titty Twister, Jacknife Jeds, that seems to be the more legit business with less after-hours bloodshed.

Coming away from the show, despite my gripes, it still manages to be a fun ride.  This is B-movie heaven for the small screen.  This is clearly Robert Rodriguez’s’ baby, and his cinematic stamp is all over this; every episode is like a 45-minute contained film. You get action, gore, beautiful women, and plenty of over-the-top characters to keep you entertained throughout the season.  This isn’t a show aiming to win awards; this is a show that’s offering an escape from reality and delivers 45 minutes of escapism bliss, and I’m down for that.

From Dusk Till Dawn Season 2 is presented in a 1.78:1 aspect ratio.  The 1080p image is arrived at with an AVC MPEG-4 codec at an average of 30 mbps.  This is a sharp-looking series; even with some of the bad color grading in flashbacks I still like the overall look of this film.  A lot of detail is captured here, and you can really appreciate some of the visual effects on display.  Even though red may be the color that rules the series, the black levels have a definite separation and look good.

The DTS Master Audio 5.1 track is the quality you would come to expect from a big-budget blockbuster film.  When the show is thrusting you into one of its many action sequences, the speaker separation gives you an immersive experience.  The dialog is clear throughout, as well as the Mexican honky-tonk music playing at the bar.  This is a solid lossless track that continues to impress with every episode.

Audio Commentaries:  We are given two audio commentaries for the episodes that Robert Rodriguez directs.  Joining Rodriguez on the tracks are several members of the cast.  Rodriguez always manages to deliver a great commentary track filled with insight for fans and blossoming DIY filmmakers. There are a few quite moments, but overall these are tracks worth giving a listen to.

From Dusk Till Dawn: Inside the Episode: (16:16) Here we get an episode-by-episode breakdown of what occurred with the characters and the story.

Behind the Scenes Featurettes: (24:25) Several mini-segments put together with a play-all option.  We get everything from the creators talking about the pulp origins and the Mexican mythology that inspired the story, to a look at the costumes and effects.  There is a lot of information in a short amount of time, but worth a look.

New York Comic Con Panel:  (44:35) Your standard panel with the cast and director discussing the process of making the show and fielding questions from the audience.

While Season two came out of the gates guns ablaze, the show definitely has its faults.  If you’re looking for a break from the heavy dramas and just want to binge-watch some cool eye candy, this is your show. The tale of the Gecko brothers seems to have only gained some steam, and it looks like their crime spree will be going for at least another season.

Brent Lorentson is a horror writer and film critic based out of Tampa, Florida. With a BA in Digital Film, he co-wrote and co-directed Scavenger Hunt. His short stories have appeared in various horror anthologies. In 2019 his short script Fertile Blood will be a part of the anthology horror film Slumber Party. He is currently working on his first novel A Dark and Secret Place set to be released in late 2019. Favorite Films: Taxi Driver, Fight Club, I Saw the Devil, The Wild Bunch, Dawn of the Dead, A Clockwork Orange, Pulp Fiction, Heathers, The Monster Squad, and High Fidelity.
Freeheld (Blu-ray) Tuesday Round Up: February 9, 2016