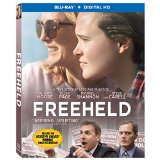 The story is the star in Freeheld, which chronicles a same-sex couple’s fight for equality. The film is based on the Oscar-winning documentary short of the same name and follows Laurel Hester, a New Jersey cop with terminal lung cancer, as she attempts to pass her pension benefits to domestic partner Stacie Andree. Despite being a modest production, Freeheld was able to enlist some top-drawer acting talent. Unfortunately, it also attracted a risk-averse team of filmmakers who tell Laurel and Stacie’s story in a thoroughly rote and uninspired manner.

The movie begins in 2002 with Laurel (Julianne Moore) bailing her partner Dane (Michael Shannon) out of a jam during a sting operation. This opening is meant to illustrate that Laurel is an exceedingly capable police officer, but the clumsily-staged sequence has the unfortunate side effect of shining a light on director Peter Sollett’s limitations. (Same goes for a subsequent storyline involving a double homicide that is equally clunky.) Laurel is also a lesbian who worries about someone at her job finding out about her sexual orientation, so she drives to Pennsylvania to take part in social activities. That’s where she meets Stacie (Ellen Page), a younger woman who sparks Laurel’s interest.

Despite Laurel’s gruff and abrasive behavior at the outset, the two fall in love and buy a house together in Ocean County, New Jersey, where Laurel is still hesitant to introduce Stacie as her romantic partner. Their lives are rocked when Laurel is diagnosed with late-stage lung cancer. She applies to have her pension benefits assigned to Stacie — who works as a mechanic — but her application is denied by the board of chosen freeholders, the county’s governing body. With Dane’s support, Laurel and Stacie decide to fight the freeholders’ decision, which eventually attracts the attention of Steven Goldstein (Steve Carell), an outspoken gay rights activist in New Jersey.

Freeheld bumps up against the notion that Laurel was an exceedingly reluctant gay rights activist. In other words, she didn’t want to be a symbol…she just wanted the same opportunity that any other officer in her department (many of whom weren’t nearly as decorated as Laurel) had to pass their benefits on to a spouse. The “activist” mantle is thrust on her by people like Goldstein, and the movie doesn’t necessarily see this as a bad thing, which is an intriguing notion that is largely left unexplored.

Instead, Sollett and writer Ron Nyswaner — who previously explored LGBT themes in his screenplays for Philadelphia and Soldier’s Girl — place Laurel and Stacie’s story in an overly familiar box. Not only does Freeheld tread the same ground as other (and better) movies about gay rights (Philadelphia, Milk) and terminally-ill lead characters (Love Story, The Fault in Our Stars), but it does so in much less dynamic and interesting ways. Sollett, who brought a pleasing verve to Nick and Norah’s Infinite Playlist, is particularly disappointing with his work here. His direction is hopelessly stilted and stale; the story takes place in the early/mid-2000s, but this hopelessly square and generic movie easily looks like it takes place in the 1980s or before.

Even the aforementioned top-drawer acting talent can’t fully salvage things here. Moore, the reigning Best Actress Oscar winner, is more effective when she’s portraying Laurel’s stoic strength toward the end than when she has to play cops and robbers early on. And Page brings a warm, soft spark to Stacie. However, the two talented actresses share little-to-no romantic chemistry, which makes Laurel and Stacie’s connection fall flat. Shannon is good as Laurel’s gruffly supportive police partner, but even he seems to occasionally fall into a parody of a “Joisey Cop.” And even though Carell’s over-the-top performance seems to belong in a different movie, I was grateful for the jolt of life he provided once his character showed up.

Meanwhile, the freeholders are depicted as a callous group of butt-coverers — with the exception of the one played by The Good Wife‘s Josh Charles — and there’s also an undercooked storyline about another closeted cop at Laurel’s precinct (played by Luke Grimes) that plays out precisely how you’d expect.

I get the sense that the filmmakers were more concerned with doing justice to Laurel and Stacie’s story and less worried about making a vibrant piece of entertainment. Their intentions are certainly noble, but it doesn’t make for a very good movie.

Freeheld is presented in an aspect ratio of 1.85:1. The 1080p image is arrived at with an AVC MPEG-4 codec at an average of 36 mbps. You won’t be surprised to hear this film isn’t a visual feast by any stretch, but this Summit/Lionsgate Blu-ray proves to be more than capable. Despite a few bright daytime scenes early in Laurel and Stacie’s courtship, the palette here is a bit overcast, so colors aren’t really meant to pop. That’s also the case during the frequent sequences set inside the drab freeholders’ chambers. The good news is that fine detail — particularly close-ups when Laurel’s health deteriorates — is impressive. Black levels are deep and offer strong separation, especially during Laurel and Stacie’s first date.

The DTS-HD Master Audio 5.1 track is here to serve the dialogue, but it also finds space to bolster the story in ways the visual presentation can’t quite accomplish. For example, there are low-key, atmospheric noises — during a beach outing, and a trip to a busy bar — that effectively set the scene. The protestors that Goldstein eventually rounds up also pack a room-filling wallop with their chants. There’s even an understated bit of directionality during the movie’s action sequence (yes, there’s just one), when the sound of a car taking off down the street travels from the front speakers to the rears.

All of the bonus material — except for the original Freeheld documentary — is presented in HD.

Audio commentary with director Peter Sollett, Julianne Moore, and Ellen Page: Recorded just before the film’s limited release, Page (also a producer on the project) reluctantly takes the lead during this low-key conversation. The trio helpfully points out the ways that events in the film mirror their real-life counterparts, but there are several stretches in this commentary that are either too silent or too rambling. (Page and Moore get also giggly while watching their love scene.)

The Making of Freeheld: (13:55) Although this is obviously much shorter than the commentary track, I think this featurette does a better, more concise job of summarizing Laurel and Stacie’s story, and how the filmmakers sought to capture it. (The process included “casting” the right house for Laurel and Stacie.) We get cast and crew comments — including from Freeheld documentary director Cynthia Wade — along with a glimpse at some of the cameos from real-life figures in this saga.

Freeheld to Freedom — Ocean County Then and Now: (8:53) Stacie, Dane, and other people in Laurel’s life pop up to discuss how they supported each other during and after Laurel’s ordeal. This mini-doc also positions Laurel and Stacie’s battle as a key point in the fight for marriage equality.

Freeheld: (38:49) Of course, the best special feature is the 2007 Oscar-winning documentary short that inspired the film, which is included in its entirety here. In addition to the dramatic moments that were recreated for the feature — most notably Laurel’s climactic plea to the freeholders — we see more casually intimate footage of Laurel and Stacie at home. It also becomes apparent that the movie exaggerated certain aspects of the story for dramatic effect. (Looks like Dane was far from the only cop in Laurel’s precinct who supported her.)

The cast and filmmakers’ hearts were certainly in the right place, but those good intentions didn’t result in a movie worthy of its subjects. The main reason I’d recommend you check out this Blu-ray is to watch the original documentary and some of the other solid bonus material.