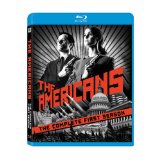 “…Super secret spies living next door. They look like us. They speak better English than we do. I mean, come on. Someone’s been reading too many spy novels.”

And now someone has expertly taken the cloak-and-dagger intrigue of a great spy novel, transplanted it onto our television screens, and called it The Americans. While the show is very clearly set during the Reagan era, its complex, multi-layered portrayal of the human beings on both sides of the Cold War makes it feel thrillingly alive today.

At first (and second and third) glance, Elizabeth (Keri Russell) and Philip Jennings (Matthew Rhys) look like a picture-perfect married couple. They have a teenage girl named Paige (Holly Taylor), a precocious boy named Henry (Keidrich Sellati), and they live in suburban Washington, D.C. in 1981. Unbeknownst to anyone else — including their two kids — Elizabeth and Philip also happen to be deadly KGB agents.

Elizabeth is the more ruthless of the pair, while Philip doesn’t actually think America is so bad. Nevertheless, they each work tirelessly to subvert the U.S. government by eliminating KGB defectors and gathering information by any means necessary. (Cue some steamy basic cable sex scenes.) While Elizabeth and Philip question their devotion to each other and the Motherland, things become complicated when dogged FBI agent Stan Beeman (Noah Emmerich) moves into the neighborhood. As if having an FBI agent across the street weren’t bad enough, Stan has also been recently assigned to the bureau’s counterintelligence division. Is his arrival a sign that the U.S. government is on to Philip and Elizabeth or is it simply a phenomenal stroke of bad luck?

While Philip decides to take the “Keep your enemies close…” approach and befriend Stan, The Americans largely resists the temptation to have that cat-and-mouse game serve as the basis for the show. Instead, creator Joe Weisberg focuses on Elizabeth and Philip’s marriage to explore fascinating ideas about loyalty, commitment and identity.

If you play a role long enough, how long until you actually start to become what you’re pretending to be? The Americans applies this notion to Elizabeth and Philip’s relationship, as well as their extended time in the U.S. living among other Americans. On one hand, the pair was thrown together in Moscow as part of an arranged marriage. Then again, they’ve also spent close to 20 years living together with two very real children. Complicating matters is the fact that their missions occasionally require them to use the power of seduction to get the job done; in one extreme case, Philip (under a false identity) becomes seriously entangled with Martha (Alison Wright), an eager-to-please secretary at the FBI. The ups-and-downs of the Jennings marriage get a little redundant during the first part of the season. (“Let’s be a real family”…“No, this is just an assignment!”) Thankfully, the show makes a tough, more definitive call on the matter in the game-changing Ep. 9/“Safe House.”

The Jennings marriage drama remains compelling because it is rooted in very relatable feelings of jealousy and doubt. Except here, those feelings are amplified to the nth degree because of the life-and-death stakes.

Although I just dedicated a very long paragraph to the Jennings marriage and the show’s family drama, The Americans also totally works as a kickass spy show. Director Gavin O’Connor (Warrior) helmed the 69-minute pilot and established the show’s tone, which makes The Americans feel like it would fit snugly alongside some of the great, paranoid capers of the 1970s like The Day of the Jackal and The Conversation. In addition to bone-crunching violence in each episode and a pulse-quickening car chase in the season finale/“The Colonel”, it’s a kick to see the characters use the (now-outdated) technology of the era. Oh and I can’t move on without mentioning Elizabeth and Philip’s various wigs and costumes. The show and the actors wisely play it straight while they’re wearing some truly ridiculous get-ups.

To play Elizabeth, Russell officially leaves behind all traces of Felicity Porter. (This is probably what it would look like if her Mission: Impossible III character worked for the Russians.) What remains is the actress’s innate ability to command the screen. Elizabeth comes off as both icier and more passionate than Philip. Rhys plays the more compassionate half of the pair, but Philip’s absolute commitment to protect his family bubbles just beneath the surface. (The Welsh actor’s over-enunciated English works in his favor, since Philip is also putting on an accent.) Elizabeth and Philip have their differences, but Russell and Rhys are a good match, and the show doesn’t stack the deck in favor of one character or the other.

At least Elizabeth and Philip get to spend quality time together during their missions. Emmerich’s Stan is so intensely devoted to his job that he neglects his own family and threatens to ruffle feathers among his colleagues, including wisecracking partner Chris Amador (Maximiliano Hernandez). While the Jennings attempt to bring down the U.S. government from the inside, The Americans shows us an equally dedicated FBI counterintelligence unit determined to defend its country. Stan’s major prize is Nina (Annet Mahendru), an inexperienced KGB agent working as an FBI mole at the Russian embassy. Despite the fact that he has dangerous Russian spies living a few doors down, The Americans goes to great lengths to show Stan is not a fool. In fact, the measures taken by both Stan and the Jennings nicely mirror each other as the season progresses and the Cold War heats up.

Emmerich is impressive as the flawed Stan, who would easily be the star of most other shows telling the same story. The Americans features wonderful, nuanced performances across the board. Mahendru seems to grow as a performer as Nina’s role becomes more prominent. Guest star Derek Luke (Antwone Fisher) radiates easy charisma as Gregory, who represents the KGB’s efforts to recruit America’s oppressed minorities. Luke makes his debut in episode 3/“Gregory” along with Emmy winner Margo Martindale (Justified), who plays Elizabeth and Philip’s outwardly chipper handler Claudia. Martindale never pops up for more than a handful of scenes per episode, but her performance effortlessly hints at what a formidable woman Claudia is. Finally, Wright’s scenes as the big-hearted Martha provides some welcome moments of levity.

By now, we’re used to (and maybe even prefer) morally murky protagonists. I mean, we just got done “rooting” for a serial killer and a meth dealer. But even Dexter Morgan only killed criminals who fit his code, while terminally ill Walter White started making meth to secure his family’s financial future. Unlike those shows, there really isn’t anything in The Americans designed to make Elizabeth and Philip Jennings palatable to American audiences: they are spies and killers whose job it is to destroy the United States. In that sense, the show is most closely related to The Sopranos, another family drama about an alternately cold-blooded and clueless clan. The Americans keeps us watching by treating everyone directly (and indirectly) involved in the Cold War as humans, rather than faceless, abstract notions of spies and government drones.

The Americans: The Complete First Season is presented in its original 1.78:1 aspect ratio. The 1080p image is arrived at with an AVC MPEG-4 codec at an average of 20 mbps. Much like its characters, the show spends much of its time in the muck and shadows. That makes for a generally muted palette. I’m sure a good part of this was done intentionally, but I still think there was a missed chance for greater contrast between the brighter scenes in suburbia and the covert missions. The image is generally sharp during close-ups, but softer in medium shots than many other TV offerings on Blu-ray. Black levels are strong and feature good separation, which helps when keeping track of what’s going on. The exception is some inconsistently noisy, darkened interiors in the pilot. It wasn’t really issue in any other episode, so I’ll just chalk it up to the pilot being filmed months before. Overall, this Blu-ray’s subdued visual presentation is probably quite faithful to what was intended, but it doesn’t exactly make for the most satisfying HD experience.

The DTS-HD Master Audio 5.1 track offers a more aggressive mix than what I’m used to getting from television shows. At first, the sound field is dominated by awesome early 1980s tracks like Quarterflash’s “Harden My Heart”, Fleetwood Mac’s “Tusk”, and (of course) Phil Collins’ “In the Air Tonight.” (Composer Nathan Barr also deserves a shout-out for his exciting, urgent score and unsettling theme music.) Once the show eases up on the ‘80s music — at least until the finale, with its perfect use of Peter Gabriel’s “Games Without Frontiers” — you’ll notice the subtle ambient effect during scenes in crowded bars or the FBI offices. On the other hand, it’s not hard to notice the thump from the subs during the many hand-to-hand confrontations, which helps the viewer feel every punishing blow. Dialogue also comes through clearly in this track, which does a great job of immersing you in this period.

Each of the three discs offers deleted scenes. The rest of the bonus material can be found on Disc 3.

Deleted Scenes: (12:02) A mostly inessential batch of scenes, including an excised storyline in the season finale that apparently saw Stan’s wife Sandra (Susan Misner) break her leg in a car accident. Presented in standard definition.

Commentary on “The Colonel” by Joseph Weisberg, Joel Fields, and Noah Emmerich: Show creator Weisberg is joined by writer/producer Fields, and Emmerich (Stan) for this jokey, informative commentary. We learn Steven Spielberg offered input on the editing of the climactic car chase, while Emmerich repeatedly lamented his character’s lack of wigs this season. It’s definitely worth a listen. There are also subtitles for the commentary track.

Gag Reel: (3:37) Pretty much your standard blooper reel filled with bleeped-out curses, although there was more dancing than I expected. Presented in standard definition.

Executive Order 2579: Exposing The Americans: (13:19) The best bonus feature on this set uses Reagan’s real-life executive order as a jumping-off point to examine the show’s creation. Weisberg, who previously worked at the CIA, says he was inspired to write the show after reading about the FBI arresting Russian spies in 2010. Cast and crew also make the point that three decades of perspective allow this show to be more multi-faceted compared to the gung-ho patriotism of 1980s movies and TV shows. Presented in HD.

Perfecting the Art of Espionage: (6:13) In this amusing featurette, we get a look at how real-life spy tactics were incorporated into the show. Those tactics include the Russian martial art Systema, the “Secretaries Offensive” (the method used by spies in which they married the secretaries of prominent government officials) and, of course, the wigs. Presented in HD.

Ingenuity Over Technology: (5:05) This featurette makes the excellent point that the technological limitations of the era make for better drama. The fact that a character can’t just whip out a cell phone and warn someone they’re about to walk into a trap is another reason why making this show a period piece was a great idea. Presented in HD.

It’s hard not to compare and contrast this show to Showtime’s equally-addictive Homeland, which tells a more contemporary jazz spy story from a different perspective while bobbing and weaving along with its bipolar protagonist.

However, The Americans should be enjoyed on its own merits as an engrossing drama. The special features on this Blu-ray from Fox reinforce the idea that the people behind this show know what they’re doing. Season 2 premieres Feb. 26 on FX, and I highly recommend you catch up in time.