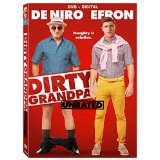 Robert De Niro and Zac Efron have a combined seven Academy Award nominations and a pair of Oscar wins to their names. So it was only a matter of time until these titans of cinema joined forces on the big screen. All joking aside, none of us were expecting Dirty Grandpa to pump up De Niro’s Oscar tally. What *is* a bit surprising — other than how truly bad this charmless, dimwitted, mean-spirited “comedy” turned out to be — is that Efron kind of outclasses his legendary counterpart.

DeNiro stars as Dick (tee-hee) Kelly, who recently lost his wife of 40 years. After attending his grandmother’s funeral, strait-laced Jason Kelly (Efron) agrees to drive his grandpa from Georgia to Boca Raton, Florida at the older man’s request. Dick and Jason used to be thick as thieves, according to the poorly Photoshopped pictures in the opening credits. The pair drifted apart after Jason abandoned his passion for photography to go to work as a corporate lawyer for his dad/Dick’s son (Dermot Mulroney, getting absolutely nothing to do). The road trip is supposed to be one last opportunity for Jason and his grandpa to bond before Jason marries his uptight, controlling fiancée Meredith (Julianne Hough, admirably leaning into her character’s awfulness).

Naturally, Dick has other plans. From the moment Jason walks in on his grandpa in a compromising, self-pleasing position — the movie valiantly tries to turn “doing a number 3” into a thing — we know that they’re not gonna make it to Boca Raton. During a stop at a diner, the duo encounters Shadia (Zoey Deutch), a former college classmate of Jason’s, and her friends Lenore (Aubrey Plaza) and Bradley (Jeffrey Bowyer-Chapman). Dick lies and says that he’s a college professor — which piques chronically horny Lenore’s interest — and that Jason is a photographer for Time magazine. (Meanwhile, Bradley is just here so that De Niro can make a series of forced homophobic jokes.) Lenore invites Dick and Jason to join them in Daytona Beach for some spring break debauchery.

Dirty Grandpa shouldn’t be confused with Bad Grandpa, the Jackass-produced prankfest that at least squeezed some laughs out of scandalizing and irritating unsuspecting victims. With this movie, I barely felt scandalized, but I was definitely irritated.

I realize that both comedy and taste are subjective. I can also kinda see the carefree, brainless vibe Dirty Grandpa is going for. Hough’s prissy nag and Shadia’s oafish boyfriend Cody (Jake Picking) seem to have been transplanted directly from any number of goofy ’80s comedies. The difference here is that basically every one-note character on screen is either pitiful or detestable. (This 110 minute Unrated Version is even more painful, since it tacks on about 8 minutes to the theatrical version.) It would’ve been nice to get some sort of hint that uptight, repressed Jason actually had a bad boy  dying to get out; instead, it mostly feels like his grandfather is legitimately torturing him for much of the movie. Similarly, Dick’s sociopathic behavior comes out of left field after his totally reserved appearance in the movie’s opening scene. We’re told the former military man kept some secrets from his family, but even that feels like a lame retread of the ex-CIA guy De Niro played in Meet the Parents.

Still, the worst thing about Dirty Grandpa is that director Dan Mazer, writer John M. Phillips, and everyone involved in this production have convinced themselves that simply having each character yell out the most randomly offensive things possible qualifies as humor. Turns out the only halfway decent recurring gag in the movie involves Efron’s Jason explaining his boring job (“SEC compliance…LLC agreements”) to people who could not give less of a damn.

The rest of Dirty Grandpa‘s jokes — and it feels generous even calling them “jokes” — largely hinge on the novelty of seeing a screen legend like De Niro yelling crazy things and trying to hump everything in sight. It seems like nobody involved in this production got the memo that De Niro has been appearing in junk that is far beneath his talents for the better part of the last decade. (And he’s been making fun of his own tough guy persona since 1999’s Analyze This.) So watching him dive into trash isn’t quite as earth-shattering as everyone here seems to think it is, although Dirty Grandpa still manages to stand out from the junk pile.

Efron, who became a Disney-minted heartthrob thanks to High School Musical, has settled into starring in raunchy comedies in recent years. So I didn’t think he’d be totally believable as a square, but the actor’s Ken doll looks help sell Jason’s repressed personality. He turns out to be an effective straight man, although maybe I just sympathized with him since it felt like every horribly annoying thing that was happening to Jason was also happening to me. Deutch makes for an inoffensively bland match for Efron, while Plaza — who looks smashing — and the wickedly sharp deadpan she honed on NBC’s late great Parks and Recreation are an odd match for her wildly uninhibited character. The supporting cast also features Jason Mantzoukas as the (overly) friendly neighborhood drug dealer, and Adam Pally as Jason’s crass cousin (a funny actor who nevertheless sets the bar for the movie’s aimless debauchery in the first scene). I also have a vague memory of Danny Glover showing up as Dick’s war buddy, but the scene was so pointless my brain seems to have suppressed it.

Here’s hoping my brain still has enough juice to do the same for the rest of this debacle.

Dirty Grandpa is presented in an aspect ratio of 2.40:1. The 1080p image is arrived at with an AVC MPEG-4 codec at an average of 36 mbps. The sunny, lively visual presentation is one of the few highlights of this Blu-ray experience. Colors pop impressively, whether we’re seeing them on Jason’s preppy wardrobe or the many bikinis on the beach. There’s some nice detail during close-ups, particularly during the scene where Jason Face Times with Meredith and his face is covered in sand. (Though not covered enough to conceal the obscene drawing on his forehead.) The movie was filmed in Georgia, which unconvincingly subs in for Florida. Either way, we do get some pleasing warm tones here during the “Daytona” sequences. (I’m not saying we don’t deserve all of the movie’s cheap jabs at Florida…but at least come here and make fun of us to our face, Dirty Grandpa!)

The DTS-HD Master Audio 5.1 track is as dialogue-driven as your typical comedy, with a few pleasing flourishes. An early scene in a church allows the sound to echo nicely from the front speakers all the way to the rears. A nightclub sequence introduces some solid bass into the proceedings, but the subs are pretty quiet otherwise. The aforementioned dialogue comes in cleanly, which is pretty much the only clean thing about this movie.

“Filthy Filmmakers Who Have No Shame” Audio Commentary: Director Dan Mazer is joined by writer John M. Phillips, and producer Michael Simkin for a predictably rowdy running commentary. Unlike the movie itself, this trio displays flashes of wit as they jokingly compare DeNiro’s Oscars to Efron’s Teen Choice Awards. But this track is mostly useful for production details like Plaza not having a body double as her character was grinding up on DeNiro’s scuzzy senior and Efron having some flesh-colored pants digitally airbrushed during a nearly-nude moment at the beach.

Gag Reel: (1:39) Opens with a bit of freestyle rapping which is followed by the usual curses and flubbed lines.

The Filthy Truth — The Making of Dirty Grandpa: (9:50) DeNiro is absent from this “Making of” — he’s nowhere to be found on any of the behind-the-scenes material, actually — but his starstruck co-stars have plenty of praise for him. Everyone also seems to be in total disbelief he agreed to star in this movie. (That makes all of us!) This featurette also includes some extended looks at what passes for improve comedy/riffing in this movie.

Lessons in Seduction: (3:13) A comically proper and prissy breakdown of Plaza’s Lenore and the character’s blunt, brazen sexual advances.

Daytona Heat: (3:47) I have no idea why anyone thought that anybody would want to see more of the obnoxious cops played by Mo Collins and Henry Zebrowski, but here are Officers Finch and Reiter auditioning for a fake, Cops-like reality show called “Daytona Heat.” This special feature can’t even fully commit to the bit and the ending falls totally flat.

I Got Nothin’ to Hide — A Look at Daytona’s Most Vibrant Drug Dealer: (5:58) A look at Jason Mantzoukas’ equally obnoxious drug dealer Pam, but at least this character’s relentless good cheer makes him more bearable. (If you can overlook the fact that Pam hands out crack like it’s candy.)

Other than a solid A/V presentation courtesy of Lionsgate, there just isn’t very much to recommend here.

I absolutely enjoy a good, inspired raunchy comedy that pushes boundaries. Unfortunately, the most offensive thing about Dirty Grandpa is how lazy and utterly unfunny it is.