Posted in: Disc Reviews by Brent Lorentson on May 25th, 2016 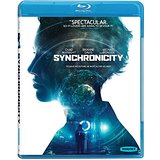 Time travel films have been around for years, and with each film there are viewers who just enjoy it at face value and others who watch it to poke holes in the film’s theories.  I have to admit I fall somewhere in between.  With a film like Back to the Future, I don’t look at it as anything more than silly fun, but then a film like 12 Monkeys comes along, and I just go bananas over its theory and execution.  So when a title like Synchronicity came along, I went into it with an open mind.  I know you don’t need a giant budget to pull off a time travel film; what matters first and foremost is the story and the characters that lead the narrative tale for us.

It’s inescapable to not see the influence Blade Runner has on this film; everything from the set design to the lighting simply screams at us to see the influences. Some may even pick up a familiar Dark City vibe.  Setting these visual tones was for me what worked best for this film, because it at least made it visually fun to look at and to wonder if this story could be happening in the sync with the other two films; after all, the film does bring up the idea of numerous parallel universes.

The film follows a physicist, Jim Beale (Chad McKnight), who believes he’s solved the riddle of time travel, but in order to prove his findings he has to travel into the wormhole to find the rest of his answers.  Many of his questions revolve around a certain mysterious woman who comes along following the success of his first experiment. Abby (Brianne Davis) clearly seems to have something up her sleeve, but is it to hurt Jim’s experiment, or is her flirting simply harmless?  Funding the experiment is Klaus (Michael Ironside), who isn’t in this to achieve a scientific miracle but instead for fame and most importantly the fortune that comes along with the ability of time travel.

Once Jim manages to slip back in time, he discovers it’s not to travel back a matter of years but instead a matter of hours.  Basically he has to be careful not to cross paths with the other self, thus altering the course of time.  To help alert him any time he may be close to his other self, he is attacked by proximity headaches as well as electrical interference.  I wish more fun could have been allowed with this, but the film attempts to stay on track as Jim continues to put together the pieces and understand people’s agendas towards him and his project.

Here is the thing that bothers me: the film attempts to be too smart for its own good.  So much time is wasted on him trying to understand Abby’s motivations as well as what Klaus wants, that when the result is discovered, I couldn’t help but shrug.  What’s missing most are some moments of levity that seem to only come when Jim’s lab assistant Chuck (AJ Bowen) is around.

While the film does earn its merit for at least attempting to do a serious time travel film, I can’t help but feel it missed the one crucial element to putting it over the edge.  It forgot to be entertaining.  The execution is all there, but it’s a story we’ve seen before, and there’s simply nothing new here.  I mean, there is no suspense, there is no fun climatic buildup or action, and it simply deflates all the momentum this film had going for it.  Unfortunately they don’t have a time machine to go back and fix things.

Synchronicity is presented in the aspect ratio 2.39:1.  The 1080p image is arrived at with an AVC MPEG-4 codec at an average of 24 mbps.  While the film very much tries to capture the look of Blade Runner, it unfortunately doesn’t match it.  The film is missing the depth and richness that film manages to capture.  It’s a dark film in the sense where no one seems to be properly lit, leaving everyone in the shadows. Sure, this may be intentional, but at times I just felt one of the characters really just needed to turn on a light switch somewhere.  There isn’t much in the way of detail that you can find in the black levels.  When there is light, it seems the future will be in a hue of blue, which puts the skin tones a little off.  Granted, this may be all intentional. I saw no artifacts or compression issues, but overall I’m not a big fan of the look presented despite how much I love the films from which they got the inspiration.

The DTS-HD Master Audio 5.1 track is a bit simple for your typical sci-fi film.  We get a lot of drones and crashes as the lead character experiences his proximity headaches, but for the most part this is a film that relies heavily on dialog.  The dialog comes through clearly and at a comfortable level, though don’t be surprised if you feel the need to replay a conversation because you feel you missed something.

Audio Commentary with Writer/Director Jacob Gentry:  Although he may be running this track on his own, Gentry manages to keep the track lively by mentioning the numerous influences that brought his vision to life.  After hearing this track he managed to get me to appreciate the film a little more, but not enough to save it.

Interview with Actor Chad McKnight: (6:21) The actor discusses his thoughts on the film and working on the film.

Interview with Actress Brianne Davis: (2:50) A very brief interview segment where the actress goes on to discuss how she feels this is the best project she’s worked on.

Interview with Writer/Director Jacob Gentry: (4:36) Here the director goes over his thoughts on the film and what it all means to him.

I look at this film as something that was on the cusp of being better than it is.  Maybe I’m being hard on it, but really the film brings nothing new to the table.  The biggest thing I got out of the film is that clearly the director enjoys playing with lights.  For those who are heavy into sci-fi maybe you’ll enjoy this one, but for you casual viewers out there, this might be one to hold off on unless you’ve seen everything already on your Netflix queue.

Brent Lorentson is a horror writer and film critic based out of Tampa, Florida. With a BA in Digital Film, he co-wrote and co-directed Scavenger Hunt. His short stories have appeared in various horror anthologies. In 2019 his short script Fertile Blood will be a part of the anthology horror film Slumber Party. He is currently working on his first novel A Dark and Secret Place set to be released in late 2019. Favorite Films: Taxi Driver, Fight Club, I Saw the Devil, The Wild Bunch, Dawn of the Dead, A Clockwork Orange, Pulp Fiction, Heathers, The Monster Squad, and High Fidelity.
Dirty Grandpa: Unrated (Blu-ray) Contest: Win Power Rangers: Wild Force: The Complete Series From Shout Factory