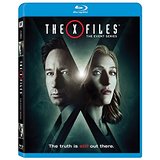 “My name is Fox Mulder. Since my childhood, I have been obsessed by a controversial global phenomenon. Since my sister disappeared when I was 12 years old in what I believe was an alien abduction. My obsession took me to the FBI, where I investigated paranormal science cases through the auspices of a unit known as the X-Files. Through this unit, I could continue my work on the alien phenomenon, and the search for my missing sister. In 1993, the FBI sought to impugn my work, bringing in a scientist and medical doctor to debunk it… which only deepened my obsession for the better part of a decade, during which time that agent, Dana Scully, had her own faith tested. In 2002, in a change of direction and policy, the FBI closed the X-Files, and our investigation ceased. But my personal obsession did not.”

Just in case you don’t know what the heck we’re talking about here.

By the time The X-Files had reached its seventh season, the two stars of the show were feeling the stress of doing over 20 episodes of the series every year. In the eighth season David Duchovny was going MIA, and Gillian Anderson’s Scully character had a new partner in Robert Patrick’s Agent Doggett. They used Duchovny’s absence as a new story arc in the overall mythology, and the story became the search for Mulder. It provided an interesting chance for Anderson to take even more center stage, and she actually handled the changes pretty well. But even Anderson was getting tired, and the ninth and final season would feature Anderson in only a limited role as Doggett and his new partner Agent Reyes, played by Annabeth Gish, became the new agents on The X-Files. The missing Mulder storyline began to get stale, and the show limped through that final season. But fans hoped that Mulder and Scully would find a way to reunite and bring back the core team that really was the heart of The X-Files.

That wish came true rather quickly with 1998’s The X-Files movie. It wasn’t the kind of film fans had hoped for, and the wait continued for another decade until the 2008 X-Files: I Want To Believe. That film didn’t inspire the fans at all. It seemed as though the show was finally dead. I think that by this point everyone concerned with the franchise understood that the film format didn’t present the material at its best. As the years went by there were always rumors and hoaxes about the franchise’s fate. Finally in 2016 hope was again revived when it was announced that in January of 2016 The X-Files would return to the place it belonged. The series would return as a limited-run series. Originally there were to be seven episodes. It seemed like the perfect compromise. Fox had some success with this format with the 24 franchise. It allowed the return of the two stars who could do a limited run without the exhausting schedule of a full season and yet allow enough time for the show to work its original magic. The actual run ended up at six. And as much as I have looked forward to this day, I was overall disappointed with the results.

The first and last episodes act as a bookend story for this “10th” season. My Struggle and My Struggle II were deep in the show’s mythology, with Mulder now believing a reverse conspiracy theory. He’s become convinced that the UFOs were actually a smokescreen by the government to hide their true agenda. The two agents reunite with a video blogger Tad O’Malley (McHale). He’s pretty much a Glenn Beck spoof character who believes he’s uncovered the truth that Mulder has so long searched to find. The investigation leads them to an Independence Day-styled bunker where a recreation of an alien craft hovers and demonstrates cloaking technology. It all leads to the FBI bringing back the X-Files with Mulder and Scully back in their own jobs. From here it’s a monster-of-the-week collection of four episodes with only one being a true winner.

As much as I’ve been disappointed with this revival series in general, I found the third episode to be one of my favorite episodes in the entire series history. It’s a very humorous, tongue-in-cheek romp that finds the duo on the trail of a were-lizard. The best thing about the episode is the treasure chest of Easter eggs to be found. There are tombstones bearing the names of Kim Manners and Jack Hardy, both important members of the original crew who are no longer with us. Manners had directed more episodes than anyone else on the show. He was truly one of the brightest minds behind the original series. The central character is dressed in the wardrobe of Karl Kolchak. Fans of the show know that Carter credits the 1970’s series Kolchak: The Night Stalker as his inspiration for the series. The suite, shirt and straw hat were almost a superhero’s uniform for Darren McGavin, who played the Chicago journalist who stumbled into monsters as a reporter for the Independent News Service. The episode is also populated with actors who had been on earlier episodes of The X-Files. This episode is nothing more than a love letter to the fans.

The rest feature rather stale stories that fail to bring out the best in the show or its stars. There’s an amusing episode where Mulder goes on a mushroom trip that includes cameos by the Lone Gunmen. The inclusion of a mini-me version of the Mulder/Scully duo is amusing. Six Feet Under’s Lauren Ambrose plays the Scully-like Agent Einstein and The Flash’s Robbie Amel plays the Mulder-like Agent Miller.

Of course there is the return of Mitch Pileggi as Assistant Director Skinner, but he’s used only as extended cameos. William B. Davis returns as the Cigarette Smoking Man, who looked like he was 90 back in the 90’s. There’s even a nice spot for Annabeth Gish as Reyes returns. It would have been nice to have seen Robert Patrick as well. The final episode tells us this is the end but finishes with a cliffhanger. What’s up with that?

There are certainly some bright moments, and I think the revival beats the two movies by a long mile. This is the format for the show, to be sure. Chalk up the rust from so many years since we last saw these characters, and check it out for the nostalgia value alone.

Each episode is presented in its original broadcast aspect ratio of 1.78:1. The 1080p image is arrived at with an AVC MPEG-4 codec. This high-definition image presentation makes one thing perfectly clear. Technology has come a long way since the series ran in the 1990’s CGI technology on a television budget was almost nonexistent in the 1990’s. Today it’s as common as you please. The image is certainly crisper and sharper than the show has ever been. Honestly, the production here is better than the films. Details bring a brand-new element to the mix. Black levels are quite nicely rendered. Perhaps the sharp production jump makes this feel somewhat different from the series. Watch them back to back and you are in for a shock. In episode three the brilliant green foliage is remarkable.

The DTS-HD Master Audio 5.1 is pretty much there to serve the dialog and that wonderful Mark Snow music. The atmosphere is the one thing that remains constant over the years.

Deleted Scenes: (5:21) There are only two for the entire season. There is a play-all option.

The Making Of A Struggle: (53:35) This look behind the scenes of the first episode is split into five parts for royalty issues. Fortunately, there is a play-all option. The feature is pretty much led by Chris Carter, who provides a pretty in-depth look at how the series returned and the production on the first episode. We get a great look at the things they found from the original show. The two leads talk frankly about taking on the roles after so much time. So much behind-the-scenes footage including plenty of bloopers and playing around on the set. It’s presented in a video production diary format.

Season X: (1:23:16) This follows pretty much the same style and format but for the rest of the season’s episodes. We get a pretty sweet look at the actors’ process and more information than these kinds of these usually provide for television productions.

Monster Of The Week – A Recap Of The Wildest And Scariest From The Original Series: (10:53) X-Files video blogger Kumail Nanjiani gives us his nine favorite creatures, one for each of the show’s previous seasons.

Green Production: (2:44) More like a PSA that looks at the environmentally friendly aspects of production.

David Duchovny has expressed some agreement that the short run wasn’t exactly what it could have been. He’s declared that six episodes were too few to really do the show any justice. He’s expressed an eagerness to return with a slightly longer run next time. Will there be more? “Yeah, I’ve heard something like that.”

Gino Sassani is a member of the Southeastern Film Critic's Association (SEFCA). He is a film and television critic based in Tampa, Florida. He's also the Senior Editor here at Upcomingdiscs. Gino started reviewing films in the early 1990's as a segment of his local television show Focus. He's an award-winning recording artist for Omega Records. Gino is currently working on his 8th album Merchants & Mercenaries. Gino took over Upcomingdiscs Dec 1, 2008. He works out of a home theater he calls The Reel World. Favorite films: The Godfather, The Godfather Part II, The Body Snatcher (Val Lewton film with Karloff and Lugosi, not the pod people film), Unforgiven, Gladiator, The Lion King, Jaws, Son Of Frankenstein, The Good, The Bad And The Ugly, and Monsters, Inc.
Exclusive Interview With Patrick Rodio: Writer Of All American Bikini Car Wash Star Trek: The Original Series: The Complete Series (Blu-ray)