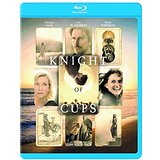 After a tidy, 20-year gap between making 1978’s Days of Heaven and 1998’s The Thin Red Line, director Terrence Malick has morphed into a regular workaholic. Since 2005, the enigmatic filmmaker has cranked out a whopping (for him) four movies, including 2015’s Knight of Cups. Malick’s most recent effort strikes many of the same lyrical, dazzling, and confounding notes as Tree of Life, which is the best-received film from the director’s surprisingly prolific recent run. But while Knight of Cups undeniably has glimmers of grand beauty and ambition, it mostly plays as if someone made a spot-on parody of a Terrence Malick film.

“All these years…living the life of someone I didn’t even know.”

Knight of Cups is ostensibly about a successful but depressed screenwriter named Rick (Christian Bale). We watch Rick as he wanders from one segment of his ungratifying life to the next and tries to form connections with younger brother Barry (Wes Bentley), estranged dad Joseph (Brian Dennehy) and a series of impossibly alluring women (Cate Blanchett, Natalie Portman, Imogen Poots, Freida Pinto, Teresa Palmer, and Isabel Lucas).

And…that’s pretty much it in terms of “plot.” Well, I suppose I should mention that Malick draws inspiration — and snippets of ponderous voiceover narration — from “The Pilgrim’s Progress”, a Christian allegory from 1678. There are also passages from religious/philosophical texts like the “Acts of Thomas” and “A Tale of the Western Exile.” On top of that, the movie takes its title — and each of the story’s eight chapter headings — from tarot cards. I assure you it’s all precisely as pretentious and tiresome as it sounds on paper.

And yet it’s impossible to completely dismiss any Malick film because of the outright artistry on display. While this film lacks the breathtaking ambition of The Tree of Life — which only set out illustrate the origin of all life and explore its meaning…no biggie — you can see some big picture themes in Knight of Cups if you squint just right. Rick’s midlife crisis and the vapidity of Hollywood are certainly familiar tropes that have rarely been presented this way.

The film (just like Malick’s three most recent projects, The New World, Tree of Life, and To the Wonder) was shot by three-time Oscar winner Emmanuel Lubezki. So it’s not surprising to see Knight of Cups employs a naturalistic approach (like the Lubeski-lensed The Revenant) to go along with the camera’s relentlessly intrusive (Birdman) and occasionally disorienting (Gravity) movements. The latter quality helps sell the notion that Rick is drifting through his life, while the fragmented presentation mimics the way humans actually remember things. The tarot card motif also gives Malick’s “story” a nice progression that it might otherwise lack, even if I felt the chapters didn’t really cohere in a meaningful way.

The experimental Knight of Cups has no script to speak of (though Malick earned a “writing” credit), and you get the sense that the filmmaker simply wanted to turn on his camera and see what his talented collaborators came up with. That freedom is almost certainly the reason the director consistently attracts top-notch talent, even if they don’t know what the hell they’re doing in his movies.

Bale (The Dark Knight of Cups?) is obviously a supremely talented performer, but he’s asked to play an empty vessel here. As a result, Knight of Cups lacks a central captivating performance to keep viewers interested in Malick’s doodling. (Like the way Jessica Chastain stole Tree of Life from Brad Pitt and Sean Penn.) Poots makes for a fetching initial object of desire as pink-haired free spirit Della, and Blanchett (as Rick’s ex-wife Nancy) is the only female performer who is Bale’s equal in terms of screen presence. Portman’s Elizabeth has the most overtly emotional arc, but the movie’s airy presentation saps some of her segment’s power. Same goes for Rick’s supposedly strained relationship with his father and younger brother. Meanwhile, Pinto and Palmer make for spellbinding, ultimately disposable distractions. (Although at least they didn’t get their screen time squeezed like Lucas, who barely flits by in the movie’s final chapter.)

There’s a party scene early on hosted by Banderas’ character (who brought a welcome burst of life during his all-too-brief appearance) that features cameos by established actors like Jason Clarke, Joe Manganiello, and a few others. (The eclectic cast also features the likes of Dane DeHaan, Nick Offerman, Cherry Jones, and Joel Kinnaman in microscopic roles.) Some of them seem to be playing themselves, while others are playing vacuous Hollywood phonies; perhaps Malick blurred that line on purpose.

I’d wager, however, those actors had no idea whether they’d even end up in the final cut. Malick also repeatedly uses water (lavish pools, or Rick repeatedly wandering along the shoreline of a beach) as a metaphor for…something. I’d be lying if I said I got it. The problem is you may not care enough to figure it out.

Knight of Cups is presented in an aspect ratio of 2.35:1. The 1080p image is arrived at with an AVC MPEG-4 codec at an average of 34 mbps. As I mentioned before, the film largely relies on a naturalistic presentation. And since a lot of the action was captured in outdoor Los Angeles and Las Vegas locations, the result is often a sunny, pleasingly warm image that nicely contrasts with Rick’s existential funk. This Blu-ray, courtesy of Broad Green Pictures, also offers sensational detail even during faraway panoramic shots. There are some vibrant bursts of color to be found — including Della’s pink wig — but they lean more toward the earthy side (and away from saturation). Given Malick and Lubezki’s involvement, it’s no shock to find that the visual presentation for Knight of Cups is the highlight of this disc.

The DTS-HD Master Audio 5.1 track dedicates a lot of space to Hanan Townshend’s evocative score. Fortunately, there is some effective separation between the front speakers and rears, so the music is presented in a subtly dynamic way. Thanks to the film’s many outdoor sequences, there is also a consistent and immersive whooshing wind that blows throughout the sound field. Even the subs get to chime in, most notably during an early earthquake but also to give the crashing waves at the beach an extra bit of oomph.

The Making of Knight of Cups: (16:02) To the surprise of absolutely no one, the reclusive Malick is nowhere to be found on this featurette. The good news is plenty of the film’s talented cast members turn up to excitedly talk about working on such an unconventional, abstract project. The better news (at least for dum-dums like me) is that pretty much every actor seems as mystified by this film as I was. Several of them talk about how there was no script, and Pinto discusses getting ready to do a scene with Bale and not realizing her co-star wouldn’t be speaking. Fun times!(?) Presented in HD.

Believe it or not, Malick has yet another feature in the can called Weightless, though it’s unclear when we’ll actually see it. (Both Knight of Cups and Weightless were reportedly shot back-to-back in 2012; Knight of Cups spent two years in post production.)

As is the case with pretty much all of Malick’s work, Knight of Cups isn’t for everyone and certainly exercises a different part of our moviegoing brains. I’m all for artistic freedom, and it’s encouraging that Malick gets to make movies the way he wants to make them. But for all the pretty pictures in his films, I find the extreme navel gazing to be a chore I’d rather not go through.