Everybody Wants Some (Blu-ray)

Posted in: Disc Reviews by Brent Lorentson on July 12th, 2016 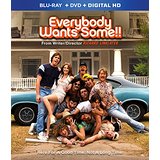 For the Gasparilla International Film Festival, to nab the latest film from writer/director Richard Linklater is kind of a big deal. GIFF was the second festival to show Everybody Wants Some after its debut at the acclaimed South by Southwest festival.  With the film being lauded as a spiritual sequel to Linklater’s cult hit Dazed and Confused, I had to admit I was a bit skeptical about this film and its ability to even match up to its predecessor, after all it was the indie darling that helped launched the careers of Matthew McConaughey, Ben Affleck, Milla Jovovich, and many others.  This ensemble of talented up-and-comers managed to capture this cinematic lightning in a bottle about high school, that for me is a film I manage to watch at least once a year when I come across someone who hasn’t yet seen the film. So how does the film hold up in the face of such expectations?  For me this isn’t just a fun film, but I’m taking a stand and calling this the best party film to date (and yes, I’m daring to say it’s better than Animal House).

It’s time to take a trip back to 1980, a time before social media was ever a thing, and when cars came with tape decks filled with cassettes and people who had record collections were not hit with being called hipsters.  The star of this film for me is the music that is beautifully strung through the film, whether we’re listening to Van Halen, Sugar Hill Gang, or The Knack, what we have is a great assortment of music to set the tone of the film, and we get a musical bag of ear candy to indulge.

With the mood music set, it’s time to meet Jake (Blake Jenner), who is a freshman pitcher who has arrived to his campus just days before school is about to begin.  Jake gets to bypass living in an on-campus dorm and instead is rooming with his teammates in an off-campus home.  It’s the college dream with only two rules: no alcohol in the house and no girls upstairs; we already know it won’t be long till these rules are broken.

The rest of the team is comprised of McReynolds (Tyler Hoechlin), the team captain and star batter, Willoughby (Wyatt Russell), a stoner transfer student who is also a pitcher, Dale (J. Quinton Johnson), who for the most part is Jake’s more grounded navigator to adjusting to college life, and then there is my personal favorite of the group, Finn (Glen Powell), whose words of wisdom border between profound and simply absurd.  I think for many viewers everyone will find their own characters they either relate to or simply just can’t get enough of.  This is one of the few casts I’ve seen put together where the chemistry between them all is just a special kind of movie magic that doesn’t come along too often.

As for the actual plot of them film, it’s a bit thin; after all, it really is simply us following the team around as they travel between every club and party as we watch them get drunk and laid.  It’s the conversations we get in between and the interactions between these young men as they bond and evolve into a team that make this something special.  Between the innocent hazing, we also get some charming moments where the more seasoned students are attempting to train the freshmen how to handle college women.  All this occurs as we watch the team travel from a disco bar, to a country bar, to eventually a punk show.  As we see the cast maneuver through the different clubs and parties, we get to see what Linklater is really trying to say here: that college isn’t just about school and baseball for these guys, but it’s really the place where everyone gets the opportunity to discover who they really are.  A profound notion, for a film surrounded by massive amounts of alcohol consumption.

By the time we finally get to see the guys get together for their first practice and see them in action, we are already fully invested in each of the characters.  I’d love to see these guys together in a film with the attention just on their actions while in a gameplay atmosphere.  As much as I dug this sequence, the part of the film that hooked me the most involves the girl in room 307, Beverly (Zoey Deutch) and Jake’s immediate puppy-dog affection towards her.  Though the interactions between Jake and Beverly are all too brief in my opinion, they are the moments we get to see Linklater shine.  If you haven’t seen his “Before” trilogy, seek them out and enjoy them.  Linklater knows how to create beautiful honest moments with characters as they are dipping their toes into romance.  And for a film that manages to pull you into the heart of the party, it also manages to pull on the heartstrings and hope for the best for this potential couple.

There is no slick photography, or CGI effects, not even a collection of big-name star power.  Instead, Everybody Wants Some is a fun film that captures the optimism of life in those early days when you are leaving home and embarking on the adventure of college.  Is it a film with more optimism than reality?  Of course it is, but that’s the point; this is the film that captures that moment where we all are just ready to cut loose and have a good time, and the movie delivers that from start to finish.  Is this the kind of film that gets handed awards? Not a chance. For me this has been the most fun I’ve had this year at the movies, and it left me with a big stupid grin on my face. I will happily take another trip with these guys, as I already foresee this becoming a new film I’ll revisit often.

Everybody Wants Some is presented in a 1.85:1 aspect ratio.  The 1080p image is arrived at with an AVC MPEG-4 codec at an average of 30 mbps.  Staying true to the time period, there is a lot of color that simply pops on the screen.  All through the film we get sharp detail from the off campus housing to the clubs the team heads out to.  One of the best sequences where we see the color pop the most is when we see the team hit the baseball field. There are no artifacts or compression issues; this is as close as it gets to seeing what the early 80’s was like without the use of a time machine.

The DTS-HD Master Audio 5.1 track is just about the coolest soundtrack you can experience. Not only does this have one of the best collections of songs for a film, but the sound is also quite impressive.  The dialog is clear throughout despite many of the sequences taking place during parties.  No, there may not be any big special sound effects, but thankfully with this mix the music won’t drown out the dialog, and in a comedy that’s actually a good thing.

Everybody Wants Some!! More Stuff That’s Not in the Movie: (25:24)  A mix of bloopers and behind-the-scenes footage of the film

Rickipedia: (3:57) a little segment about how the cast feels director Richard Linklater is an encyclopedia of knowledge about the late 70’s and early 80’s.

Baseball Players Can Dance: (6:42) A look at the rehearsals the cast had to do to pull off their dance moves in the film.

Skills Video: (5:17) A fun little segment that shows the cast and the videos they had to submit while auditioning for their roles demonstrating their athletic skills.

History 101: Stylin’ in the 80’s: (4:20) A behind-the-scenes look at the cast as they get their trademark hairstyles from the past as well as their costumes for the film.

We’re midway through the year, and for me this is still my favorite film of the year (so far, at least0.  I’ve seen the film four times now, and it still holds up.  This is the kind of film you can sit back and enjoy with friends; it’s the perfect hang-out movie just like Dazed and Confused was.  Really, I don’t know what more I can say other than, if you’re ready to take a trip back in time and relive the 80’s or just want to have a good time, this is the movie to check out.

Brent Lorentson is a horror writer and film critic based out of Tampa, Florida. With a BA in Digital Film, he co-wrote and co-directed Scavenger Hunt. His short stories have appeared in various horror anthologies. In 2019 his short script Fertile Blood will be a part of the anthology horror film Slumber Party. He is currently working on his first novel A Dark and Secret Place set to be released in late 2019. Favorite Films: Taxi Driver, Fight Club, I Saw the Devil, The Wild Bunch, Dawn of the Dead, A Clockwork Orange, Pulp Fiction, Heathers, The Monster Squad, and High Fidelity.
iZombie: The Complete Second Season Code of Honor (Blu-ray)