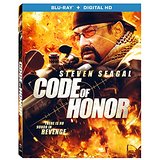 I honestly try to be a good guy whenever I sit down to write a review because the fact is I wouldn’t be doing this if I didn’t have a deep love for movies. Heck, I can usually even derive enjoyment and find the charm in films that obviously have limited resources. Unfortunately, it’s hard to stay positive whenever Steven Seagal pops up on a Blu-ray cover, always with the same neutral expression and always brandishing a firearm. Code of Honor, Seagal’s latest offering, is no exception. If the question is, “Is this a good movie or a bad movie?”…I think you know the answer.

This time Seagal stars as Col. Robert Sikes, a Special Forces legend who has taken it upon himself to eliminate every drug dealer, crook, and assorted scumbag he can set his sights on. Sikes seems to especially have it in for the criminal empire run by a mobster named Romano (James Russo, a total non-factor here). The police, represented by 10-steps-behind Det. James Peterson (Louis Mandylor), are at a loss in terms of stopping Sikes’ killing spree. That’s around the time shadowy government agent William Porter (Craig Sheffer) arrives on the scene. Porter is a former protege of Sikes’ and appears to be the only man with a chance to stop him.

As you can see, the plot is as blandly uninspiring as the movie’s title. A few times during the film, Sikes is referred to as a “super vigilante”, and I couldn’t help but wish that the film had gone all-in on the schlock and just called itself Super Vigilante. Code of Honor, on the other hand, feels like it could literally be the title of *every* Steven Seagal flick.

The movie was written/directed/inflicted upon us by Michael Winnick, who gives both Sikes and Porter their own ready-made tragic backstories. But instead of giving Code of Honor a “Death Wish for Dummies” spark, this stab at character development falls flat since we never see Sikes or Porter with their lost family members, making it impossible to care. (It’s a classic case of telling, not showing.)

Of course, that’s actually the least of this movie’s problems. Code of Honor feels low-rent from the opening credits (which feature the rarely-seen “Also Edited by” credit) to the film’s dopey conclusion. In between, we get laughably bad CGI fire, bullet wounds that are accompanied by unconvincing mists of fake blood, and an interminably slo-mo sequence at a strip club. (Hey, I didn’t say this movie was ALL bad!) There’s also sluggish, clumsy fight choreography, and if a Steven Seagal movie can’t get the fight choreography right, what’s the point of it even existing?

This is as good a time as any to talk about Seagal himself. The movie is smart to keep Sikes a silent killer for the movie’s first half hour or so. (General rule of thumb: the less Steven Seagal speaks, the better.) I’m not breaking any news when I say the bloated actor is far from his physical peak of the ’90s. So for the second movie in a row (that I’ve seen), most of the hand-to-hand combat in a Steven Seagal movie is handled by his co-star.

In Absolution it was Byron Mann, and here it’s Sheffer (not exactly at his fighting weight either) who carries most of the action. Sheffer at least injects some personality into his brooding, abrasive character. (At least when he’s not saddled with a side plot involving an imperiled single mom stripper played by Helena Mattsson.) Code of Honor is so dumb and lifeless that I felt like I’d been rope-a-doped when the movie introduced a decent swerve towards the end. Naturally, a film as inept as this one ends up botching and mangling the ending anyway, so any goodwill you may have felt is immediately snatched away.

Code of Honor is presented in an aspect ratio of 1.85:1. The 1080p image is arrived at with an AVC MPEG-4 codec at an average of 25 mbps. This is pretty much your standard, low-budget action flick visual presentation. That means color and contrast have been muted to give the movie a “grittier” look. (The exception is the comically phony mists of blood after every headshot, which are the most saturated thing in the film’s color palette.) The image is clean and largely blemish free, except for some sporadic digital noise during a couple of darkened interior scenes. Fine detail is solid, though well short of razor sharp. The only place where this presentation earns strong marks is with its black levels, which offer very good separation and are as inky as Seagal’s unconvincingly dark hair.

The DTS-HD Master Audio 5.1 is a tick livelier than the disc’s visual presentation. The opening sequence — featuring Seagal’s Col. Sikes picking off a dozen or so unsavory characters with a high-powered rifle — displays terrific directionality as the bullets ping from one speaker to the next. Those gun shots (along with the hand-to-hand blows) also get an extra boost from the subs, which can also be heard during the movie’s neverending, slo-mo club sequence. Dialogue, including Seagal’s mumbly delivery, comes through in a surprisingly clean way.

Look, no one is looking for Oscar-caliber fare when they plop down to watch a Steven Seagal movie. At this point, it’s not even realistic to expect a slick, Bourne-style action romp. However, I do think it’s fair to want to see the actor do most of the fighting in his own movie. And if he’s not going to do that, he could at least switch it up and eventually acknowledge that he’s in his mid-60’s. (Unfortunately, that would mean he’d have to stop dyeing his hair oil-black and maybe let one of his opponents actually land a blow during hand-to-hand combat.)

But as long as Seagal refuses to let himself look vulnerable on screen, we’re all vulnerable to terrible movies like  Code of Honor.