Posted in: Disc Reviews by Brent Lorentson on July 15th, 2016 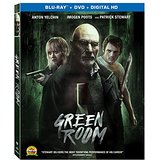 Ever since writer/director Jeremy Saulnier came out with his gripping revenge film Blue Ruin, fans have been patiently waiting to see what he’d do next.  If you have not had the chance to see Blue Ruin and you are a fan of the revenge genre, it’s a film that is certainly a must see and is one of the few films that lives up to the hype that surrounds it.  The problem with doing such a strong and powerful film so early in your career is that expectations seem to just skyrocket, and it seems there is just no way you can make everyone happy.  As a fan first and critic second, I know I’ve been guilty of doing this in the past, and it’s almost impossible to not get excited, and at the screening for this film, I know I was not the only one with high expectations.

On top of the high expectations, the group I viewed the film with was restless after having the film delayed as well, so this only seems to be another strike against the film before it’s even had a chance to play.  I mention all this for the simple reason that this film reminded me of the importance of shutting out all expectations and simply letting the film stand on its own merit.  This is important because I feel Saulnier knew the expectations he had, and instead of playing it safe, he did something that very few filmmakers are willing to do anymore; he simply made a movie that is not just gripping and intense, but most importantly, it was fun.

Green Room is relatively straightforward as we follow a young punk band as they are touring the northwest coast of the US, all their gear stashed in their van as they struggle to get gigs to pay for food and gas.  Even gas is difficult enough to come by, and at times the band is forced to siphon gas to get by to the next gig.  And by gig, this really is nothing more than a restaurant where no one seems to be paying them any attention.  It’s when a indie-punk critic finds them a gig that things start to get interesting.  The gig takes the band out of the city and into a bar in the middle of the woods, and to make matters a little more intense, the owners and the patrons of the establishment are all skinheads.  Basically this is the setup for the punk show from backwoods hell.

Pat (Anton Yelchin) is the quiet leader of the band; he doesn’t seem to have any of the qualities you want in a leader, but nevertheless he band sticks close to him and his decisions.  We don’t get much of their performance, but we get to see enough that they’ve managed to win over some members of the audience, and once they get paid they are more than eager to leave, except everything changes, because a member of the group leaves their phone behind, and when Pat goes to retrieve it, he walks into the aftermath of a murder.

Pat and his group are locked away in their green room, the backstage room basically, while the employees of the club attempt to sort out what happened, and from here things only get worse.  When Darcy (Patrick Stewart), the owner of the club, arrives, you know right off the bat this is a bad dude, but does he really want to harm Pat and the rest of the band, or does he simply want to clean up this incident and send everyone on their merry way?  It’s that doubt that seems to keep Pat from opening the door and letting Darcy’s people in, but quickly the situation only escalates.  And that is what makes this film work. The film constantly increases the tension and its grip on the band as they struggle to do whatever they can to not just make it through the situation but eventually survive the night.

It’s very easy to compare this to Assault on Precinct 13 or Rio Bravo, and yes, I certainly do see that.  But what makes this film more unique is that unlike those films we get to hang out with the villains as they strategize how best to flush our heroes out.  To a degree we can at least understand that Darcy is simply just protecting his business, and as the night progresses, we see even he has something more personal at stake to lose.

This is a vicious film. In Blue Ruin we got to see Saulnier as he showed violence in a very harsh and in-your-face manner, and in Green Room he is even more in-your-face with it and is not going to let the camera look away.  Every attack is brutal. This isn’t about a high body count, but instead this is about the raw savagery needed to survive when your back is against the wall.

This is the kind of dark and gritty film you want to see with a crowd. This is the kind of high-energy film you find during a midnight screening, or you would have found at a drive-in theater during the grindhouse glory days.  Imogen Poots, Mark Webber, and Macon Blair also contribute some intense performances that step this film up from being your standard direct-to-video fare, as does the startling camera work from Sean Porter.  While I can’t say this film is ‘better” than Blue Ruin, you can definitely see that Saulnier is on track to continue to become one of the more exciting filmmakers out there.  His take-no-prisoners approach to violence and writing relatable characters is a strength that will only continue to help forge his path in the industry.  He’s a talent film fans are going to be sure to gravitate to as the divide between blockbuster films and indie cinema only continues to widen.

Green Room is presented in the aspect ratio 2.40:1.  The 1080p image is arrived at with an AVC MPEG-4 codec at an average of 26 mbps.  This is a very dark film that has very little color in it.  The look fits the tone of the film, and with some of the night shots, as well as numerous shots in the club, there is a fair amount of detail that is lost. While there are no compression issues, the film is often so dark that the black levels seem to lose their depth at times but never look crushed. For the most part the look of the film feels right for the mood as well as the location (being in the northwest with the sun and light drowned out by rain and dark clouds) The saturation of the film does darken the blood but manages to be all the more gruesome when we get the sharp detail of mangled limbs and various corpses.

The DTS-HD Master Audio 5.1 track is very immersive and plays with the audience very well.  Whether it’s the explosion of sound from the punk show or the separation of sound during the siege of the room, this is more than your basic mix.  10 Cloverfield Lane is possibly the only track this year that I believe matches up with the use of sound to great tension for a scene. Everything from the dulled sound of the band playing deeper in the club, to the footsteps outside the door, there is such a good  grasp of special awareness that is at work here that you may not realize on the first viewing how much it sucks you into the moment of the scene.

Audio Commentary with Writer/Director Jeremy Saulnier:  This is the kind of commentary future film students and filmmakers can gain a lot of information from when it comes to what goes into directing and on a smaller budget.  Saulnier keeps the conversation going without being dull or overloading you with too much information.  One of the better tracks of the year.

“Into the Pit” Making Green Room Featurette: (9:58) Sadly an all too brief BTS look at the making of the film.  It barely scratches the surface, but thankfully we have the awesome commentary to make up for this.

With a second viewing of the film, this was a much more violent and darker film than I had first remembered.  Though it may not be technically a horror film, this is a very horrifying viewing experience that will make you cringe.  I love how this film manages to suck you in and take you to places where most films wouldn’t dare to go.  This is perhaps my favorite siege film, and this will certainly make you think twice about seeing a punk show in the middle of the woods.

Brent Lorentson is a horror writer and film critic based out of Tampa, Florida. With a BA in Digital Film, he co-wrote and co-directed Scavenger Hunt. His short stories have appeared in various horror anthologies. In 2019 his short script Fertile Blood will be a part of the anthology horror film Slumber Party. He is currently working on his first novel A Dark and Secret Place set to be released in late 2019. Favorite Films: Taxi Driver, Fight Club, I Saw the Devil, The Wild Bunch, Dawn of the Dead, A Clockwork Orange, Pulp Fiction, Heathers, The Monster Squad, and High Fidelity.
Code of Honor (Blu-ray) The Infiltrator