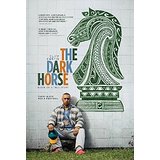 “You talk dreams to those kids, you better follow through.”

There’s a (not-so) grand cinematic tradition of white knights riding into rough neighborhoods and inspiring the disadvantaged kids who are seemingly stuck there. We’ve seen this plot applied in everything from Hardball and McFarland USA to Sister Act 2. (Hey…no one said the white knight *has* to be white). For the most part, these movies are as formulaic as they are enjoyable. So one of the many wonderful things about New Zealand chess drama The Dark Horse is that its white knight hero is a complex, damaged, well-meaning figure who’s actually in worse shape than the kids he’s trying to help.

The Dark Horse is based on the real-life story of Genesis “Gen” Potini (masterfully played here by Cliff Curtis), a gifted chess player with severe bipolar disorder. (Potini was also the subject of a 2003 documentary called Dark Horse.) This film opens with Gen wandering the streets of Gisborne, New Zealand in a manic state. By this point, Gen has been in and out of several mental institutions, so his older brother Ariki (Wayne Hapi) reluctantly agrees to take him in. Ariki also happens to be a leader in the local street gang, and his soon-to-be-15-year-old son Mana (James Rolleston) is due to be initiated.

To find some stability, Gen decides to join the local chess club — the Eastern Knights — as a mentor, much to the chagrin of current leader Noble (Kirk Torrance). In Noble’s mind, the club’s most important function is to provide stability for the ragtag kids who show up every week to play a game. Noble worries that Gen will fill their heads with the sort of delusions and pipe dreams that cloud Gen’s own mind. And that’s seemingly what happens when Gen announces that he believes the Eastern Knights can win New Zealand’s national chess championship. Meanwhile, Mana expresses an interest in his uncle’s new hobby, which puts Gen at odds with his dangerous brother.

Look, I’m well aware of how cringe-worthy and awards bait-y this movie sounds on paper. Lovably scrappy underdog kids banding together to overcome the odds? Check. The sort of mentally addled main character that Tropic Thunder brilliantly skewered? Double check!! But filmmaker James Napier Robertson — directing only his second feature film on top of writing the script — and his team work hard to help The Dark Horse avoid the many cliches and pitfalls inherent in this material.

One way to ensure that your movie doesn’t look or feel overly familiar is to depict a part of the world we’re not used to seeing. Not only was The Dark Horse filmed in Gisborne and Auckland — the New Zealand locations give the movie an irreplaceable sense of authenticity — but Gen, Mana, and most of the other characters are of Maori descent. Rather than just being a throwaway trait, the film incorporates Maori culture into the way Gen teaches the Eastern Knights how to play chess. (The chess sequences are zippy without relying on any sort of distracting stylistic tricks.)

As for the street gang subplot, The Dark Horse doesn’t sugarcoat the dangerous world that Mana is about to enter. More importantly, the movie makes a strong case for the sad inevitability of that world when it comes to people like Ariki and Mana. In other words, Ariki genuinely doesn’t see a better option for his son, which is why he’s so intent on preparing him for a hard life. This section of the film is bolstered by the great work of Hapi as Ariki, whose extreme stillness suggests both menace and weariness. (Hapi is a novice actor and an ex-gang member.) Rolleston is also mighty impressive as the surly teen who slowly (and perhaps tragically) realizes that a life beyond Gisborne is possible.

But the star of the show is unquestionably Curtis, who gets a long overdue star turn here and knocks the role of a lifetime out of the park. The actor has been reliably good for about 20 years and is probably best known for playing the bland lead in The JV Walking Dead. In addition to gaining 60 pounds to play Gen — the actor adopts a smallish, tentative body language despite the extra heft — Curtis brings both openheartedness (“Gen” could just as easily be short for “gentle”) and specificity to his performance. (The character rambles to himself in a mixture of English and Maori when he’s under duress.) Most importantly, neither Curtis nor the filmmaking team approach Gen as a saint; in fact, he’s simply a deeply flawed person trying extremely hard to help others.

The Dark Horse is one of the most impressive (non-Middle Earth) exports from New Zealand, and one of the best movies in a well-worn subgenre. Check this one out if you get the chance.