Posted in: Disc Reviews by Gino Sassani on August 3rd, 2016 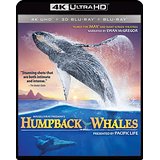 “Our planet holds a kind of parallel universe. A place of wonder where giants roam free. For thousands of years, we could only wonder about humpback whales. Now, by exploring their world, we’re getting surprising glimpses into their lives.”

In 1986, Leonard Nimoy led Kirk, Spock and their mates back in time to collect a couple of humpback whales and bring them to the 23rd century where they are extinct. If the whales aren’t there to communicate with a deadly probe, Earth is in deep trouble. Fortunately, thanks to conservation and educational programs, there should be plenty of humpbacks in the 23rd century to answer that long-distance telephone call. The animals have made an incredible comeback, and while the numbers are a long way from pre-whaling populations, they can be found all over the world. Most of us can’t afford the tickets to Alaska, Hawaii, or the Tonga Islands to see them firsthand. Shout has bought us a couple of roundtrip tickets to see these amazing marine mammals. The magic of 4K brings them right into your living room or home theatre. It’s so lifelike that you might just get wet. Enter the splash zone of Humpback Whales.

The documentary was financed by Pacific Life. They’re a good choice, as they have incorporated the whales into their logo for years. It’s narrated by Ewan McGregor. The IMAX cameras take us on a journey to three important stops in the humpback’s 10,000-mile roundtrip migration across the planet. In Alaska the whales feed. In the more tropical waters they mate and eventually give birth, and the cameras are there. No footage has ever been taken of humpbacks actually mating, but we do get to see the courtship. We get to see a mother caring for her baby, which is already 14 feet long at birth. The film is loaded with field footage including their dramatic leaps into the air. And let’s not forget the songs. This film certainly didn’t forget anything. 40 minutes of spectacular footage of humpback whales.

The documentary is also quite informative. CG animation allows helps explain a humpback hunting practice called bubble netting. It’s a rather organized activity requiring individual whales to perform specialized tasks in a coordinated effort to feed. We also get to see some remarkable rescue footage as a team frees a whale from 200 feet of net line that has become entangled in its fluke. Without help, the whale would be likely to die from infection or drowning. There’s a ton packed into just 40 minutes.

Humpback Whales is presented in an aspect ratio of 1.78:1. The Ultra high-definition  image is arrived at by an HEVC codec. You would think that this film might not live up to the previous Shout Imax 4K releases. After all, this is the ocean, and humpback whales aren’t the most colorful animals in the world. Color still manages to astound, but what is remarkable here is the tremendous detail of it all. The bright blue water is teeming with plant and animals that can be seen with great clarity. The best detail is reserved for the whales themselves. The texture and detail give you a rather tactile experience that makes you feel you could reach out and touch them. But if you’re looking for nice HDR color, look no farther than the sweet sunrises that completely splash your screen with wonderful oranges and reds. The whale plumes also deliver a nice bit of texture as they fly into the air and slowly dissipate.

The 3D presentation is arrived at by a MVC codec with a 25/11 dual bit-rates. The 3D is quite natural, but, of course, there’s not nearly the color and detail found in the 4K disc.

The Dolby Atmos defaults to a 7.1 audio presentation. Look, there’s little question that the audio primarily serves the narration. It’s all pretty crystal clear and rich. The whale songs are given nice clarity here and are truly stand-out. The huge animals hitting the water provide some nice subtle sub response.

You can watch in HDR or SDR. Opt for HDR.

Making Of (17:07): The crew take us along to the locations, and we get to see them capturing these amazing images.

There’s no question that these huge animals were meant to be experienced on the large IMAX screens. But you should not underestimate the experience at home in 4K. These Imax presentations mean that the source is 70 mm, not 35. At just 40 minutes, there’s a ton of headroom on the disc. That balances the big with the beautiful as you watch “a 40-foot adult appear weightless in its ocean home”.

Gino Sassani is a member of the Southeastern Film Critic's Association (SEFCA). He is a film and television critic based in Tampa, Florida. He's also the Senior Editor here at Upcomingdiscs. Gino started reviewing films in the early 1990's as a segment of his local television show Focus. He's an award-winning recording artist for Omega Records. Gino is currently working on his 8th album Merchants & Mercenaries. Gino took over Upcomingdiscs Dec 1, 2008. He works out of a home theater he calls The Reel World. Favorite films: The Godfather, The Godfather Part II, The Body Snatcher (Val Lewton film with Karloff and Lugosi, not the pod people film), Unforgiven, Gladiator, The Lion King, Jaws, Son Of Frankenstein, The Good, The Bad And The Ugly, and Monsters, Inc.
Tuesday Round Up: August 2, 2016 Viral