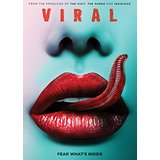 The setup for Viral is promising enough. Throughout the early part of the film, we get subtle yet effective hints at the escalating catastrophe that is about to infect the story. (We hear about someone’s mom coughing uncontrollably, plus a video of a bloody, unexplained elevator attack goes, well, “viral.”) So it’s a shame that this sci-fi/horror thriller is limited by both its micro-budget and (more importantly) a filmmaking team that only sporadically delivers the goods.

Teenage sisters Emma (Sofia Black-D’Elia) and Stacey (Analeigh Tipton) have recently moved to a town called Shadow Canyon. Emma is the withdrawn, serious-minded sister who has a crush on a neighbor/classmate named Evan (Travis Tope). Meanwhile, Stacey is the rebellious black sheep in the family. (You can tell she’s a rebel because of the purple streak in her hair.)

As Emma begins to come out of her shell, she starts noticing the effect of a mysterious virus that seems to have arrived in Shadow Canyon. The good news is that Emma and Stacey’s father (Michael Kelly, House of Cards) is a high school biology teacher, so Emma in particular is armed with more knowledge than the average teen when it comes to fending off a deadly virus. The bad news is that dear old dad is out of town when Shadow Canyon becomes quarantined and is unable to reach the girls. Eventually, Emma and Stacey have to make some life or death decisions when the virus enters their home.

Viral never really coalesces into a satisfying thriller. I’ve got a strong feeling — following a quick scan of the movie’s synopses on IMDb and Wikipedia — that this was originally conceived as a found-footage horror film. (They each mention a documentary that is not part of the final cut here.) Given that found-footage movies like Paranormal Activity appear to be on their last (shaky) legs, I don’t think this was a bad switch at all.

Speaking of Paranormal Activity, the directors here are Henry Joost and Ariel Schulman, who made my favorite (Paranormal Activity 3) and second-worst (Paranormal Activity 4) movies in that franchise. (Series-ender Ghost Dimension was a mild atrocity.) Unfortunately, the requisite retooling to transform Viral into a more conventional feature film seems to have sapped some of the juice from a story that plods along whenever its monster isn’t on screen. The movie does still retain a largely first-person look at a widespread catastrophe since we experience the town quarantine through Emma and Stacey’s eyes. But the action here feels detached instead of immediate.

It’s too bad because there are some flashes of wit and personality that we don’t usually get in horror thrillers. The movie’s opening shot is a mildly nauseating close-up of a pair of teens making out that subliminally plants the idea of…stuff being passed from one person to another. The movie sparingly uses its creature effects; Viral is the latest effort from Blumhouse, which has produced cheap-o smashes like Paranormal Activity, The Purge, and Insidious. But when we do see the effects of the worm-like virus — think FX’s The Strain on a budget — they’re appropriately icky and cringe-worthy.

Overall, these occasional bright spots aren’t enough to lift Viral above the rest of the horror fray. Even at a slim 85 minutes, the movie feels like its straining for content. (There’s not one but *two* jump scares involving a character looking through a door hole.) A subplot that reveals why Stacey is particularly hostile toward her father doesn’t make much of an impact because the latter character is essentially gone from the story at this point. Even the budding, dorky romance between Emma and Evan feels rushed and oddly disposable.

Black-D’Elhia — coming off a striking appearance in HBO’s fantastic The Night Of —isn’t able to do much with Emma, who might be book smart but makes all the classic dum dum horror heroine mistakes. I was actually more impressed with Tipton, the former America’s Next Top Model contestant who’s carved out a nice acting career in recent years. (The actress’s big doe eyes are a juicy target for Viral‘s worm flu.) In the movie’s latter half, Tipton nicely hits some dramatic notes that bring the best out in Black-D’Ehlia but would’ve been more affecting with a stronger set up.

The movie has the sort of abrupt, open-ended conclusion that makes me think it wasn’t the filmmakers’ first choice. That seems to be a recurring theme with this project, which was originally supposed to hit theaters in February. (Instead, the movie was released On Demand July 29 before arriving on Blu-ray/DVD a few days later.) Having seen the film — which has its moments — I can understand why Viral didn’t catch on.