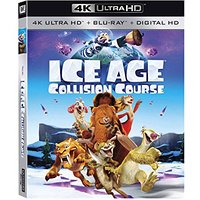 “The universe, a vast expanse of space and matter. It includes all that we see and all that we know. Since the beginning of time, we have wondered how it all came to be. A gloriously orchestrated plan? A chance series of events? Or something much, much dumber?”

Space really is the final frontier. It’s where they send tired franchises to die. They sent Jason and Pinhead to space. They sent the Three Stooges into orbit. Abbott & Costello ended up in space. They even sent Machete into space. It’s the filmatic version of jumping the shark. In Ice Age: Collision Course they send lovable Scrat into space. Maybe it’s time to put this beloved animated franchise on ice for a little while. It’s clear they’ve pretty much run out of ideas, and the box office is the proof in the pudding. What the heck does that mean, anyway? And this is from a reviewer who has been rather fond and kind to the Ice Age films up to this point. Need more proof for that pudding? Bang it Here for past Ice Age reviews.

The film starts with the traditional Scrat prologue. Don’t know who Scrat is? Go back to the previous films and join up with us later. Scrat finds a flying saucer and begins a journey that actually forms our solar system with an unfortunate consequence. In his wacky pursuit of the acorn, he sends an asteroid hurtling toward Earth that will wipe out most life on the planet and most assuredly our friends Manny (Romano), Diego (Leary), Sid (Leguizamo), Ellie (Latifah), Shira (Lopez), and Peaches (Palmer). It’s an extinction event that has been prophesized on a strange tablet. Who you gonna call? That would be Buck the Outback Weasel, voiced by Simon Pegg.

The team of characters journey to a place where extinction impacts have occurred every few million years or so. They discover that the remnants of past asteroids are magnetic and must be drawing the asteroids to that spot. The idea is to launch all of that magnetic space debris into space and lure the asteroid away. But when they arrive, they discover the debris is populated by animals that have been given eternal youth from the debris. They’re not going to want to give that up even to save the world. Add to that a trio of Dino Birds that have been Buck’s main nemeses, and there’s quite a task ahead.

But the film feels empty. The discovery of Geotopia appears forced, at best. The franchise has always introduced new places and characters, but this one is a mess. The place is ruled by a hippie-age character named Shangri Liama, voiced annoyingly by Jesse Tyler Ferguson. The character is shrill and completely over-the-top. There’s also a love interest for Sid named Brook, voiced by Jesse J. This is a psychedelic place that attempts to plant references for the parents to pick up on, but they are best left not picked up.

Collision Course has all of the earmarks of a tired franchise. The characters have lost any of their dynamics and interactions. The dialog resorts almost exclusively to cheap one-liners and toilet humor. Maybe it’s just me, but Ray Romano’s voice acting sounds like he’s tired all the time. No one here sounds at all excited except maybe for Simon Pegg, who appears to still be having fun with Buck. Of course, Buck hasn’t been around for four films and 16 years. It seems that the idea is to give the kids something silly to laugh about. The adults will not be quite so amused. This was never a slapstick franchise. It is now. Even Scrat’s adventures, which are often the highlight of an Ice Age film, appear to be straight out of a 1940’s Loony Tunes cartoon. I’m sure the writers imagine it as an homage. It’s too derivative for that. I can forgive most of the flaws in this film, but one I simply can not forgive. Remember when these films had charm? The worst sin that Collision Course commits is that there is absolutely none of the franchise’s charm to be found. Perhaps it has gone extinct as well.

Ice Age: Collision Course is presented in its original aspect ratio of 2.40:1. The 2160p Ultra high-definition image is arrived at by an HEVC codec. The film itself might be lame, but there is little question that the computer-animated technology continues to improve. What the film lacks in heart, it does provide in technological wizardry. The film sports razor-sharp animation lines. The colors are vibrant without being oversaturated at all. This is the way 4K discs are supposed to be mastered. The visuals pop with wonderful renditions of water and fur. Computer animated features are going to see a boon with UHD Blu-ray, and this is a nice point of reference to show the way. Black levels are perfectly dark and rich.

The Dolby Atmos presentation defaults to a nice 7.1 track. Unfortunately, the characters are a bit shrill in this film. There’s no fault in the audio presentation. You hear exactly what you are intended to hear. It just seems like there’s too much high end here and not enough sub even during the explosive scenes. I’d call this a very light presentation. Dialog comes through fine, as do all the zany Loony Tunes “inspired” sound effects. The score is dynamic and rich.

The UHD disc contains a 15-minute feature that compiles all of the Scrat footage of the film into one short. Actually it might be the best version of the movie. All of the rest of the features are recycled footage for mockumentaries and mayhem.

There has been no talk of ending the franchise here. I suspect there will be more. I also suspect there will be reduced budgets on anything that follows. The franchise has pulled in nearly $3 billion with the first three films. But Collision Course barely made $64 million here at home. The foreign take put it just ahead of the first film, but not nearly when adjusted to current dollars. “Sounds like it’s slowing down.”

Gino Sassani is a member of the Southeastern Film Critic's Association (SEFCA). He is a film and television critic based in Tampa, Florida. He's also the Senior Editor here at Upcomingdiscs. Gino started reviewing films in the early 1990's as a segment of his local television show Focus. He's an award-winning recording artist for Omega Records. Gino is currently working on his 8th album Merchants & Mercenaries. Gino took over Upcomingdiscs Dec 1, 2008. He works out of a home theater he calls The Reel World. Favorite films: The Godfather, The Godfather Part II, The Body Snatcher (Val Lewton film with Karloff and Lugosi, not the pod people film), Unforgiven, Gladiator, The Lion King, Jaws, Son Of Frankenstein, The Good, The Bad And The Ugly, and Monsters, Inc.
“31 Nights Of Terror” Contest: Win Lucifer: The Complete First Season From Allied Vaughn Jack Reacher Never Go Back