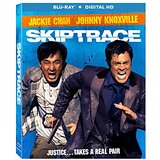 It’s been more than four years since Jackie Chan — the legendary Hong Kong superstar who has been kicking butt and scoring scoring laughs on screen since the 1970s — announced he was retiring from action movies. Sure, Chan quickly backpedaled, but I don’t know that anyone would’ve held it against the actor (who is now 62) if he’d stuck to his word. After decades of grueling injuries, Chan has noticeably slowed down. That being said, the old man still has a few tricks up his sleeve in Skiptrace.

Chan stars as, well, Bennie Chan, a Hong Kong detective whose partner, Yung (Eric Tsang), is killed by a shadowy crime boss known as “Matador.” Bennie’s promises to look after Yung’s daughter, Samantha (Fan Bingbing), but his obsession with capturing Matador — whom the detective strongly believes to be powerful businessman Victor Wong (Winston Chao) — only grows over the ensuing decade. While Bennie tries to capture Matador/Wong using police resources, Samantha has accepted a job at a casino in Macau owned by Wong in the hopes of collecting information on his crime syndicate.

That casino is where she crosses paths with fast-talking gambler Connor Watts (Johnny Knoxville), who has a penchant for getting into trouble. Connor has been banned by American casinos and proceeds to rack up some impressive debt in China. (I haven’t even mentioned the Russian kingpin who’s trying to track Connor down for more amusingly personal reasons.) While swindling his way through the casino in Macau, Connor witnesses a murder and comes into possession of some valuable evidence against Wong. As a result, Bennie must travel to Russia to get Connor out of his current jam, and the detective resolves to get the crooked gambler back to China so he can testify against Wong.

If you’ve ever seen a Jackie Chan movie — particularly his Rush Hour/Shanghai Noon run in the late ’90s/early 2000s that paired him with a chatterbox American co-star — the odd-couple hijinx in Skiptrace will be thoroughly familiar. The director here is Renny Harlin, who made Die Hard 2, Cliffhanger, and Deep Blue Sea. Harlin’s movies aren’t exactly known for their (intentional) humor, so despite having an experienced director at the helm, the filmmaking sensibility here totally belongs to Chan.

It starts with the jaunty opening credits and concludes with the patented outtakes at the end of every Jackie Chan movie. In between, Skiptrace does come up with a few inspired touches/set pieces, including a bit involving a Russian nesting doll that actually made me laugh out loud. Throughout their journey, Bennie and Connor take almost every mode of transportation known to man (train, horseback, rickety car, makeshift raft, zipline) and banter in the completely predictable way that lets us know these two guys will be friends by the time the credits roll. Unfortunately, the things Bennie and Connor say to each other — honorable Bennie chastises Connor for his deceitful behavior, while Connor implores Bennie to loosen up and get a life — become tiresome after a while since they repeatedly rehash the same debate. Skiptrace clocks in at 108 minutes, but the movie could’ve easily shaved off 15 minutes by cutting a bit of the road material and trimming the uninspired shipyard finale.

Chan is still looking quite nimble these days, even if Skiptrace doesn’t have the sort of eye-popping stunt/moment that used to be the actor’s forte. Professional Jackass Knoxville is actually a really good physical comedy match for Chan and makes for a convincing scoundrel. The pair do pop when they’re together, which makes you wish they had better and more inspired material to work with. (Or that Knoxville was as good at improvising as Chris Tucker apparently was.) Meanwhile, the fetching Bingbing largely gets relegated to damsel-in-distress mode. At least the movie’s overstuffed plot does feature some intriguing developments in its final act.

Then again, this is the sort of flick where Bennie and Connor hang out at a Mongolian campsite and a performance of Adele’s “Rolling in the Deep” breaks out. Skiptrace seems to know how zany it is — Bennie is also randomly an alpaca enthusiast — so it’s impossible to take this movie too seriously…or get too mad at its silliness.

Skiptrace is presented in an aspect ratio of 2.40:1. The 1080p image is arrived at with an AVC MPEG-4 codec at an average of 21 mbps. The most eye-popping bits in this film come from the graphic novel-style opening credits and title cards that introduce us to the main characters. Otherwise, this is an earthy, occasionally soft presentation that only truly shines when it showcases some stunning exterior locations in Mongolia and China. Those sequences have a pleasing warmth and an impressive amount of clarity. Meanwhile, the scenes that take place in random dingy settings (including the climactic shipyard showdown) are drab and murky.

The DTS-HD Master Audio 5.1 track is dialogue-driven and…who am I kidding? No it’s not! Right from the explosive prologue, this sonic presentation packs a good wallop thanks to solid sub support. Another early sequence featuring the collapse of some houses showcases the dynamic, all-channel activity here. Ambient noise isn’t overly aggressive during outdoor scenes, but the rear speakers do offer an understated sense of immersion. Fidelity is also spot on, and the movie’s dialogue is balanced quite well with all the frenetic mayhem.

Director Commentary: Renny Harlin offers some intriguing production tidbits right off the bat when he reveals Chan had been trying to get this movie made for 20 years and that the actor considered it a love letter to China. The director also talks about a few previous near collaborations with Chan (including Rush Hour) and praises the superstar for his ability to improvise action sequences on the spot. (Something that might take weeks in a Hollywood production, for example, can apparently be accomplished in a day by a Chinese crew.) Really good track that is absolutely worth a listen.

When Jackie Met Johnny: (5:03) Knoxville, no newbie to death-defying feats himself, says this is the most stunt work he’s ever done in a movie. The duo also breaks down the contrast between their two characters, and they offer plenty of praise for the various parts of China where the movie was filmed.

Skiptrace was actually a nice-size hit in the increasingly powerful Chinese box office. The movie raked in the equivalent of $134 million, so it’s not exactly a shock that there’s a sequel in the works.

The film hits virtually every Jackie Chan action/comedy beat, which is simultaneously the best and worst thing about it. While there’s nothing really new to see here — besides the sight of Chan covering Adele, of course — the predictability of Skiptrace can just as easily be interpreted as reliability by Jackie Chan fans.