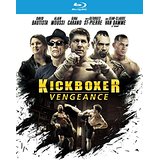 “No rules, no ref. Just your wit and skill to keep you alive.”

Last year, Creed became a critical and audience favorite by reviving a beloved dormant franchise and re-casting its brawny original star in a supporting role as a mentor. I’m not going to pretend that 1989’s Kickboxer (starring Jean-Claude Van Damme) is anywhere near as beloved — or as good — as Rocky. But Kickboxer: Vengeance, a reboot/remake of Van Damme’s campy action favorite, hits some of the same notes as Creed…except for the part where it’s a critical and audience favorite.

Stop me if this sounds familiar, Kickboxer fans. A fighter named Kurt Sloane (Alain Moussi) travels to Thailand to face the martial arts monster Tong Po (Dave Bautista), who brutally killed his older brother Eric during an underground fight. (Fine, fine…Eric was paralyzed in the original, but still.)

Kurt’s initial plan is simply to shoot Tong Po to death, but he quickly realizes the only way to get his true revenge is to face him in a one-on-one match. To that end, Kurt seeks out Master Durand (Van Damme), who trained Eric and reluctantly agrees to do the same for Kurt. Eventually, Kurt re-enters the ring with Tong Po for a bloody, three-round, winner-take-all fight to the death.

Director John Stockwell (Into the Blue, Blue Crush) specializes in straight-faced, hard-bodied cheese, so it’s no surprise that Vengeance takes itself so seriously. The movie only carries a 90-minute running time, but the simplistic story still strains to fill that. There’s a mostly pointless subplot involving a pretty Thai police officer named Liu (Sara Malakul Lane) who wants to stop the underground fights and becomes a love interest for Kurt. Fortunately, Stockwell and his team know precisely where their bread is buttered and largely focus on the Muay Thai mayhem.

For example, it barely takes two minutes for the movie’s first fight to break out as Kurt arrives in Tong Po’s compound and has to prove himself in one-on-one combat with a drunk doorman played by Georges St. Pierre, who is one of several MMA stars in the cast along with Cain Velasquez, Fabricio Werdum, and Gina Carano (as the unscrupulous promoter who lured Kurt’s brother to Thailand in the first place). Vengeance gets a ton of mileage out of Kurt’s training montage and the final fight with Tong Po — which features hand-to-hand combat, a round with broken glass taped to each competitor’s firsts, and a double sword fight to the death — is a bloody stunner.

Vengeance marks the return of Van Damme to the Kickboxer franchise he helped create (Van Damme has a “Story by” credit on the first film) follwoing a trio of JCVD-less sequels starring Sasha Mitchell. While Sylvester Stallone earned a well-deserved Oscar nomination for playing Rocky Balboa as a gentle, wily mentor in Creed, Van Damme can’t even be bothered to remove his sunglasses the entire time he’s on screen. That being said, he still brings welcome star power and gets to show audiences that he still has plenty of kick and flexibility in his legs. Bautista is a properly scary specimen — in a nod to the first film, we meet Tong Po as he destroys a concrete statue by simply striking it with his arms and legs. Unfortunately, that means Moussi (our protagonist) is constantly being overshadowed. He’s not actively bad, per se, but he’s not exactly memorable either…which might actually be worse than being outright bad.

Whereas Creed essentially told the same story as Rocky with a new protagonist and a heightened swagger, Kickboxer: Vengeance tells the same story as the film that inspired it but doesn’t even bother to change its character’s names to protect the innocent. So what’s the difference here? Unfortunately, the newer film all but abandons the sense of play and fun (and camp) that helped make Kickboxer an enduring favorite among action fanatics. Sure, some of the early scenes with Durand training Kurt feature some Mr. Miyagi-lite humor, but the only obvious nod to the original’s playfulness is an end credits sequence where Moussi re-creates Van Damme’s spellbinding, ridiculous dance.

Kickboxer: Vengeance is presented in an aspect ratio of 2.40:1. The 1080p image is arrived at with an AVC MPEG-4 codec at an average of 27 mbps. The film’s key sequences take place in darkened fighting arenas and show off inky black levels that also offer impressive separation. The fight scenes also boast impressive fine detail during both medium shots and the more gruesome closeups. Otherwise, the movie largely has a pleasing golden/yellow tint when it ventures outside to different parts of Thailand. There’s also somewhat of a desaturated look throughout that makes the blood pop a bit more once it starts flowing.

The DTS-HD Master Audio 5.1 track may not be the most detailed or nuanced audio presentation you’ll ever hear, but no one should come to Kickboxer: Vengeance expecting nuance in any way. The all-enveloping sound benefits the muscular score by Adam Dorn, but it really comes alive during the fight scenes. Not only does each blow land with a brutish thud thanks to the subs, but the 360-degree crowd noise in the rear speakers adds to the sense of intensity during those sequences.

Behind the Scenes — Kickboxer: Vengeance: (6:11) Cast and crew discuss the impact of the original Kickboxer — star Alain Moussi called the film an inspiration — and address the challenge of paying homage to the older film while modernizing the story. This featurette also highlights the fact that there are 5 World Champion fighters in this cast. Pretty basic “Making Of.” Presented in HD.

According to IMDb, there are at least two more Kickboxer films starring Moussi on the way. (Kickboxer: Retaliation and Kickboxer: Syndicate). I’m not particularly high on Moussi as the new face of the Kickboxer franchise, but there’s definitely potentially for some schlocky fun to be had down the line. (Retailiation lists Van Damme and, um, Mike Tyson among its cast members).

Vengeance is as straightforward as a Kickboxer movie can be, which is both the best and worst thing about it. Here’s hoping they take any subsequent films in wilder, more interesting (and more fun) directions.

Tuesday Round Up: November 8, 2016 Exclusive Interview With Sheldon Renan: Director Of The Killing Of America