Posted in: Disc Reviews by Brent Lorentson on December 28th, 2016 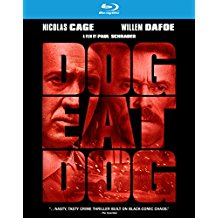 Writer/director Paul Schrader (Taxi Driver and Auto Focus) has been a guy I can’t help but root for.  His films are filled with the kind of raw grit that I like to see in films.  His knack for shining a light onto the outlaws of society is something I don’t feel anyone does as well. Usually we see these characters celebrated, or simply put, they get the Hollywood treatment.  Schrader seems to always go the other direction and depict them with an unflinching eye that captures the character with honesty and dignity, even as their lives tailspin into darkness.  Dog Eat Dog may not be an original work by Schrader, but the film certainly carries many of the staples that embrace his celebration of the anti-hero while filming the manic insanity of the reality they live in.

The film opens up with our introduction to Mad Dog (Willem Dafoe) as he is nursing a drug binge at a girlfriend’s house.  He’s begging for her help, and she reluctantly allows him to stay at least till morning.  It’s not long after that the girlfriend regrets this decision, and as a result she and her daughter are brutally murdered by Mad Dog.  The kinetic energy of this opening sequence is just a peek at the insane, dark, and brutal violence that is to follow.

Troy (Nicolas Cage) is a felon who has a soft spot for Humphrey Bogart but is looking for a big-time score to take care of his friends and himself.  He’s a criminal with good intentions but just has some pretty bad luck. It doesn’t help that his best friend happens to be the homicidal maniac Mad Dog.  To fill out this trio is the softspoken Diesel (Christopher Matthew Cook), who like Troy has had a bad streak of luck.

The team has their get-rich-quick scheme that requires them to kidnap a crime boss’s baby and hold it for ransom.  They know it’s a terrible plan, and they know if they get caught they are going to jail for life, but if the plan works, it can possibly make them a lot of money.

While the plot seems fairly simple, even generic for some, the result could not be any further from the ordinary.  The film has flashes of intense brutal violence, while the characters talk about mundane silliness in following scenes.  While we see these guys celebrate together on drug binges, we see them fail miserably with intimacy with others, whether it’s a call girl or a massage therapist.  One could almost say the film has a very bipolar demeanor to it that will literally keep you guessing as to what will happen next.  There are even plot points that are explored and quickly moved past, to even forgotten, just as you would imagine a drug addict would think and act out things.  Whether the intention was to suck you into the insane mind of a drug addict, I can’t quite say, but that is very much the feeling I had while watching this.  By the time this gets to the third act, I couldn’t help but question what reality is, and what could possibly be a hallucination.

Dog Eat Dog is just the kind of wild and crazy film you’d hope to see Cage and Dafoe act in together and have Schrader at the helm navigating through the madness.  While this isn’t the best work we’ve seen by those who are involved, this is definitely one of the more fun and unique films they’ve done in some time.

Dog Eat Dog is presented in the aspect ratio 2.39:1.  The 1080p image is arrived at with an AVC MPEG-4 codec at an average of 20 mbps.  While the film does have a nice clean look to it, it’s not what I would consider impressive.  While the coloring looks right, the blood seems a little darker here and blends into the scenery with the exception of the opening sequence.  When the film gets into the third act we see more scenes with red and blue hues, and even when it switches to black and white, the film finally seems to pop.

The DTS HD-Master Audio 5.1 track is one that comes at you with a loud and immersive experience.  While it doesn’t have the dynamic range as you’d find it a big-budget tent-pole film, the surround is utilized as the music comes from both sides along with the heavy bass with the scenes that have gunfire.  The dialog is clear, coming mostly from the front, but there is a fair amount of foley work added.  While I wouldn’t say this is top-notch, for a mid-range action release, it’s not bad.

Audio Commentary with Paul Schrader:  This guy is a wealth of information and simply knows how to tell a story.  I love listening to this guy talk about his films and his process.

Nicolas Cage Video Introduction: This was the intro that he shot for the Toronto Film Festival before the film played; it’s short and to the point.

Beyond Fest Q&A with Cage and Schrader: (25:08) A fun Q&A with the two discussing the film and other previous work in their past.  A shame this is only 25 minutes, because you just know these two have so many more stories to tell.

It’s always fun to see filmmakers and actors willing to take a risk with a film.  Dog Eat Dog is one of those films that just has cult favorite written all over it.  While it’s far from perfect, the film is simply a blast to watch, even if the plot and characters will give you whiplash at times.  It’s good to see that there are still mavericks out there willing to deliver a film that is an experience rather than a retread of the same old thing.

Brent Lorentson is a horror writer and film critic based out of Tampa, Florida. With a BA in Digital Film, he co-wrote and co-directed Scavenger Hunt. His short stories have appeared in various horror anthologies. In 2019 his short script Fertile Blood will be a part of the anthology horror film Slumber Party. He is currently working on his first novel A Dark and Secret Place set to be released in late 2019. Favorite Films: Taxi Driver, Fight Club, I Saw the Devil, The Wild Bunch, Dawn of the Dead, A Clockwork Orange, Pulp Fiction, Heathers, The Monster Squad, and High Fidelity.
12 Days Of Christmas Giveaways – Day 4: Storks In 3D From Warner Brothers La La Land