Posted in: Disc Reviews by Brent Lorentson on April 12th, 2017 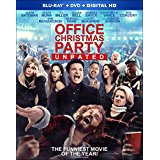 The trouble with most holiday films is that once the holiday passes, there is about another year of waiting till it seems right to put the film on again.  Everyone knows about A Christmas Story and Polar Express, but really, the staple holiday films are sparse, but they are great.  Every year, despite the high probability to fail, studios churn out some holiday films in the hopes that one of these attempted swings will turn out to be a box office giant. I believe it’s safe to say that there hasn’t been a holiday hit for a while, but despite the long odds, Office Christmas Party comes out strong with a big cast and raunchy intentions.  Is it enough to lure people into the darkened Cineplex or have you want to go out to Netflix or Redbox to cure those holiday fever blues?

T.J. Miller plays Clay, a childlike CEO who has a big heart for his company and his employees. He’s the likeable boss everyone wants to have, but really, you just can’t picture him ever successfully running a business.  As Clay’s right hand man is the serious face of the corporate branch, Josh (Jason Bateman), who has just finalized his divorce in time for the holidays.  There is a fun chemistry between Miller and Bateman that seems to fizzle after the first quarter of the film because for some reason there was a need to create romantic tension between Josh and Tracey (Olivia Munn), one of the heads in the tech department.  Right out of the gate this film feels familiar and uninspired, as though it served no other purpose than to be a paycheck for all involved.  Miller has moments in the film but simply is never given much to really work with.

In a not-so-surprising turn, when Carol (Jennifer Aniston), Clay’s sister, comes to town, she makes a stop at the business to inform Clay that he needs to make some major staff cuts.  Aniston seems to do well playing against her Friends persona, but this time around she seems to be playing it a bit a bit too cold and mean as though she’s the corporate version of Scrooge.  But Carol dangles a carrot of hope in front of her brother, that if he can land a big multimillion-dollar client, then everyone’s jobs will be safe.

Cue Walter Davis (Courtney B. Vance), the big-shot buyer for another technology corporation who has grown weary of how corporations treat their employees.  Clay seizes the moment to invite Walter to their company business party where he aims to sway how Davis feels and hopefully even manage to sign a big check for them.

I’m sure you can imagine what happens next…to fill in that blank, Clay and his team decide to throw the ultimate (but really turns out to be not-so-ultimate) office party.  This film kills me with how it aims to be so raunchy and push limits, yet at the same time it daintily walks the line of being not too offensive.  Nothing we’ve seen here manages to evoke anything beyond a chuckle.  No risks are taken, no boundaries are ever flirted with being pushed, and that’s frustrating, because there were numerous opportunities where this film could have been next American Pie or Superbad. Instead of being memorable, this yawns its way to mediocrity.

Office Christmas Party is presented in the aspect ratio 2.39:1.  The 1080p image is arrived at with an AVC MPEG-4 codec at an average of 30 mbps.  The overall look of the film is flat, but that is to be expected since it is a comedy and shot mostly on a soundstage.  We get some detail in the close-ups, and the skin tones look to be on point throughout.  There’s nothing really impressive here, but no one is watching this film for the cinematography.  I didn’t notice any compression issues, so for what it’s worth, it’s a good transfer at least.

The DTS HD-Master Audio 7.1 track is mostly what you would expect from a comedy.  The dialog is clean throughout, which is what counts.  At the start of the film there is some nice use of office ambient noise, you typical background phone talk, files shuffled around, and on the streets we get a reasonable amount of street congestion.  It’s during the party sequences where we get some added bass from the music and during the action piece at the end.

Commentary with Directors Josh Gordon and Will Speck:  Though I’m not a fan of the film, these guys do present an entertaining commentary that goes over a lot of the behind-the-scenes and the action in the film.

Throwing an Office Christmas Party: (11:51) Your standard behind-the-scenes reel with the cast and filmmakers discussing the project.

Outtakes: (8:38) This actually was the more entertaining portion where we get to see the cast run through alternate lines.

Deleted Scenes: (2:58) A small collection of scenes and an alternate ending.  Nothing memorable here.

Looking at the cast, I thought this would be a film I could get excited about, but this made it clear early on how safe this was going to be.  I even watched the unrated version and saw nothing that really could have helped or hurt the initial release.  This has moments that evoke chuckles, but for what this could have been, you may need more than a few trips to the punch bowl to survive this party.

Brent Lorentson is a horror writer and film critic based out of Tampa, Florida. With a BA in Digital Film, he co-wrote and co-directed Scavenger Hunt. His short stories have appeared in various horror anthologies. In 2019 his short script Fertile Blood will be a part of the anthology horror film Slumber Party. He is currently working on his first novel A Dark and Secret Place set to be released in late 2019. Favorite Films: Taxi Driver, Fight Club, I Saw the Devil, The Wild Bunch, Dawn of the Dead, A Clockwork Orange, Pulp Fiction, Heathers, The Monster Squad, and High Fidelity.
Daughters of the Dust (Blu-ray) Silicon Valley: The Complete Third Season (Blu-ray)